Detroit Activist, Philosopher Grace Lee Boggs: “The Only Way to Survive Is by Taking Care of One Another”

The legendary Detroit activist and community organizer Grace Lee Boggs has been involved with the civil rights, Black Power, labor, environmental justice, and feminist movements over the past seven decades. She was born to Chinese immigrant parents in 1915. In 1992, she co-founded the Detroit Summer youth program to rebuild and renew her city. Her ninety-fifth birthday is June 27th, the day after the close of the US Social Forum in Detroit. [includes rush transcript]

AMY GOODMAN: We wanted to go to a clip right now of Grace Lee Boggs. She is going to be celebrating her ninety-fifth birthday.

GRACE LEE BOGGS: I would say that we’ve got to redefine democracy, that we have been stuck in concepts of representative democracy, that we believe that it’s getting other people to do things for us that we progress. And I think that we’ve reached the point now where we’re stuck with a whole lot of concepts, so that when Michael Moore speaks about the number of people who make all this money and other people who don’t, it sounds as if we’re struggling for equality with them. Who wants to be equal to these guys? I think we have to be thinking much more profoundly.

Actually, if you go back to what Marx said in The Communist Manifesto over a hundred years ago, when in talking about the constant revolutions in technology, he ended that paragraph by saying, “All that is sacred is profaned, all that is solid melts into air, and men and women are forced to face with sober senses our conditions of life and our relations with our kind.” We’re at that sort of turning point in human history.

In Detroit, in particular, we — people are beginning to say the only way to survive is by taking care of one another, by recreating our relationships to one another, that we have created a society, over the last period, in particular, where each of us is pursuing self-interest. We have devolved as human beings.

US Social Forum to Be Held in Detroit Under Banner of “Another World Is Possible, Another US Is Necessary”

NEXTUS Social Forum to Be Held in Detroit Under Banner of “Another World Is Possible, Another US Is Necessary” 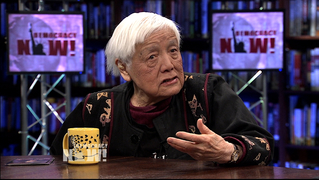