Even as the worst coal mine disaster in the United States in a quarter of a century unfolds in West Virginia, the World Bank has approved a controversial $3.75 billion loan for South Africa to build one of the world’s largest coal-fired power plants. Environmentalists in South Africa and abroad have criticized the decision and are urging the bank to stop supporting the development of coal plants and other large emitters of greenhouse gas emissions. We speak with one of the chief critics of the project, South African environmentalist Desmond D’Sa. [includes rush transcript]

The World Bank has approved a controversial $3.75 billion loan for South Africa to build one of the world’s largest coal-fired power plants. The World Bank said the loan to the South African utility company, Eskom, would help, quote, “South Africa achieve a reliable electricity supply.” But environmentalists in South Africa and abroad have criticized the decision and are urging the bank to stop supporting the development of coal plants and other large emitters of greenhouse gas emissions.


The United States, the Netherlands, Britain abstained from Thursday’s vote. The US Treasury said it abstained because of, quote, “concerns about the climate impact of the project and its incompatibility with the World Bank’s commitment to be a leader in climate change mitigation and adaptation.” The $3.75 billion [loan] includes $750 million for financing for renewables and energy efficiency projects in South Africa.


The project is also controversial in South Africa because the investment arm of the ruling African National Congress has a financial stake in the construction of the coal plant.


We’re joined now by one of the chief critics of the projects in South Africa. Desmond D’Sa is a South African environmentalist. He’s coordinator of the South Durban Community Environmental Alliance, currently in the United States, joining us from Yale University in New Haven, Connecticut.


Desmond D’Sa, Welcome to Democracy Now! Talk about your concern about this coal-powered plant and the World Bank’s financing of it.

Well, thank you. Thank you for having me, and thank you to the listeners in the US.


I’ve arrived here on the 5th, and basically, this campaign around the “Keep the Coal in the Hole” started off in October last year, and suddenly it was swift. It started after we got wind in South Africa that the energy corporation, the parasital Eskom, was applying for a loan to the World Bank. In addition, it applied to the national energy regulator in South Africa to increase its tariffs to residents in South Africa, already feeling the high impact of high levels of tariffs that we were paying.


Having visited the local communities in and around the Medupi Power Station, as well as all the mines that are proposed to be open and those currently open already in that area, and hearing firsthand testimonials of the impact of the coal mining industry in South Africa, communities across the divide, right across race, creed and color and religion, have come out and are in total opposition to this loan being granted.


It is shocking that we see that governments in the US, which have opposed — who a vision for an alternative energy regime, as well as cleaner air, are the ones abstaining and not voting against this sort of loan.


We are well aware that this loan will not help the poor, the poorest of the poor, in South Africa. In fact, the opposite is going to happen. Already, we have over 20,000 cutoffs in the major city in South Africa, Soweto, the biggest black township in South Africa. Twenty thousand people are having their electricity cut off on a monthly basis, because they just cannot afford to work. We know, with the current economic crisis in South Africa, over a million people lost their jobs in 2009. And I would just want to say that we’ve already got millions of poor black South Africans who do not have access to the grid, who do not have access to cheap alternative electricity. And they do not use the highest energy from the Eskom company.


Well, what is happening is that 40 percent of electricity is directly linked to the major energy users, the major corporates in South Africa, such as your aluminium smelters, BHP Billiton, as well as your Hulett Aluminium and your major paper and petrochemical industries in South Africa. We know for a fact that we’ve asked for information around the contracts, these special deals, what we call the sweetheart deal, and this has not been forthcoming, both from government and from Eskom itself. And this information has been provided to the World Bank.

Desmond, I wanted to ask you about the politics of countries like the United States not voting for it, but voting — well, abstaining from the vote. Clearly, you had some impact on them. Also, a number of leading senators and congressmen, like Barney Frank, like Senator Patrick Leahy, like Senator John Kerry, urged the World Bank not to support this. At the same time, you have the World Bank defending the loan, which it called the first major “lending engagement” to South Africa since the fall of apartheid, as a way to benefit the poor by creating jobs and expanding access to electricity. But talk about the movement that has gotten these countries at least to abstain.

Well, I must thank the NGOs across the world, throughout the US, the biggest groups in the US, the environmental NGOs, as well as Africa Action and other NGOs, the Bank Information Center, Groundwork USA, and all the NGOs in the US, including across Europe, who lobbied very hard to talk to the political — in their country and to ask them to really vote for a no.


We were hoping that the US would be bold, as they’ve been bold in their vision, bold in their statements, and bold in their policies, of looking at alternatives to the coal regime. We were hopeful that we could persuade the vote from the US to vote no, and the people in South Africa are looking to the US for bold leadership in this matter, especially the poor people, who feel — who face the impact of climate change in South Africa, who live alongside these coal-fired facilities, who suffer the high levels of asthma and cancer and the heavy metals that get emitted from these facilities. So it’s those people who are looking for bold leadership in the US and were hoping that the US will be bold in their decision and vote no for it.


However, having said that, I’ve heard that the dissenting voices were huge, and that in itself should send a signal to the World Bank that, you know, coal is not something that should be —- we should keep the coal in the hole. You know, we should not be supporting and financing coal-fired power stations and coal-fired mining industries, as these cause severe destruction and damage throughout the world, and particularly in South Africa, where we’ve experienced huge amounts of climate change. Both we’ve had severe droughts, as well as we’ve had some severe rainfalls in certain areas. And as I stated already -—

Desmond D’Sa, what is it like — what is it like for you to come here to the United States at the time of the worst mining disaster in more than a quarter of a century in West Virginia — twenty-five miners dead, four missing? That’s, of course, a mine. You’re in South Africa. Yours is the next step; it’s the coal plant. But the whole issue of coal politics and what it means in this campaign you have, “Keep the Coal in the Hole”?

Well, my sympathies go out to the West Virginia miners that have lost their lives and their families. And I must say, I cried when I heard about it, because it reminded me back home of the many miners and the many people that have died through coal mining in South Africa. And when I saw this here, my first impression was to cry tears. And, you know, I sympathize with the family.


I certainly believe that there needs to be other — we need to look at other alternatives. We need to engage with the workers and to find other sustainable energy that can be safe, that can provide a sustainable future for the present, and to protect the present generation. I think that’s been lacking.


And I think that the campaign to keep the hole in the coal — the coal in the hole is a very good one. Having lots of experiences in South Africa, where we’ve had huge mining — hundreds of mining miners have been killed throughout the years of the mining industry in South Africa, and continues. We know with the present project of this forty — this million-dollar loan that will be give to Eskom, it’s going to build the fourth-biggest coal-fired power station in the world, Medupi, and that will require forty new mines. And we are concerned about that, because, once again, people’s lives will be at stake here, the safety factor will be at stake. But more importantly, hundreds of people that live in those communities will be forced out of them and lose their cultural, their agricultural land. Their water is already contaminated. The area that we’re talking about in South Africa, most of the water is contaminated with acid rain. And so, we are seriously concerned.

Well, this campaign has started, and we certainly believe we are not going to leave it just as that. This campaign is going to be ongoing, and we will continue to lobby the political in Washington, as well as throughout the US, and including across the —

We’re going to leave it there, Desmond D’Sa. Thank you very much for joining us from Yale University in New Haven, South African environmentalist, coordinator of the South Durban Community Environmental Alliance.

Amnesty Head: Climate Crisis Is a “Death Penalty” for Humanity. Leaders Need Political Will to Act 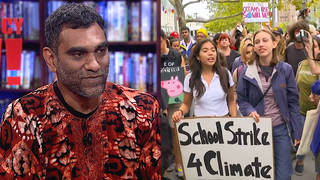 Amnesty Head: Climate Crisis Is a “Death Penalty” for Humanity. Leaders Need Political Will to Act