The attacks on Social Security have steadily intensified in the past few months. House Majority Leader Steny Hoyer recently called for a higher retirement age, and House Minority Leader John Boehner suggested raising the retirement age to seventy. Meanwhile, President Obama’s bipartisan eighteen-member commission dealing with the nation’s public debt is due to come out with a report in November that is expected to recommend cuts to Social Security. We speak with Dean Baker of the Center for Economic and Policy Research. [includes rush transcript]

StoryJan 14, 2014Dog Whistle Politics: How Politicians Use Coded Racism to Push Through Policies Hurting All

AMY GOODMAN: Next month marks the seventy-fifth anniversary of Social Security, the government’s cornerstone program for tens of millions of retirees and people with disabilities. But in recent months, the attacks on the program FDR initialed on August 14th, 1935, have steadily intensified, and Republicans aren’t the only ones calling for cuts to Social Security benefits and raising the retirement age. Last month during a speech on reducing the budget deficit, House Majority Leader Steny Hoyer called for a higher retirement age. A week later, House Minority Leader John Boehner suggested raising the retirement age to seventy in a meeting with editors of the Pittsburgh Tribune. And in February, President Obama created a bipartisan eighteen-member commission to deal with the nation’s public debt. The commission’s report is due in November and is expected to recommend cuts to Social Security.


For more on this issue, we’re joined by economist Dean Baker. He’s the co-director of the Center for Economic and Policy Research, and he co-authored a report called “The Impact of Social Security Cuts on Retiree Income.” Dean, where are we headed with Social Security right now, and what do you think needs to be done?


DEAN BAKER: Well, it’s very troublesome turf. Just to be very clear, absolutely nothing needs to be done. If we look at the projections from either the Congressional Budget Office or the Social Security trustees — they’ve yet to come out with their new ones, but in any case, the one from last year — the program could pay all scheduled benefits well into the future, at least twenty-seven years into the future. And even after that, it could still pay the vast majority of benefits, assuming nothing is ever done. Now, somewhere down the road, we’ll probably make changes in the program as we’ve done in the past. But the idea that somehow something has to be done anywhere soon, this is crazy. People have paid for those benefits. So, in effect, what we’d be doing is defaulting on the bonds that are held in the trust fund to pay people their benefits that — when they come due. So, nothing has to be done.


Now, what’s going on is that you have this real craze about the deficit, because the reason we have the deficit, of course, was we had a collapse of the housing bubble. But there’s this obsession about the deficit — “we have to do something” — and you have people running around Washington saying, “Well, you know, we can’t do anything on healthcare, because we tried that and the insurance industry was too powerful, the pharmaceutical industry was too powerful, so therefore we have to cut Social Security.” It’s close to a non sequitur and should have people absolutely fuming at their representatives in Congress. But that’s where we are in Washington.


AMY GOODMAN: What about this commission? This is President Obama’s commission.


DEAN BAKER: Well, a commission is very, very worrisome. It’s chaired, you know President Obama picked Alan Simpson, former senator from Wyoming, who’s made a career out of beating up on old people — he thinks it’s cute. I don’t know if he’s delusional or what, but he talks about how old people drive into their gated communities in their Lexuses. Maybe his friends do. We have the data. Very few others do. And then the Democratic co-chair was Erskine Bowles, who’s getting — he’s a Wall Street guy. He gets over $300,000 a year as a director of Morgan Stanley, a firm that should be famous to everyone, because it would be out of business without the taxpayers’ support. And he, right off the bat, said, “Well, we’re going to have to cut Social Security.” So, President Obama’s two lead appointees, his co-chairs, are both on record saying they want to cut Social Security. This should have people very, very worried. That isn’t a balanced commission.


DEAN BAKER: Yeah, Senator Simpson is quite a character. I mean, this whole commission is really fishy in any number of different ways. Among other things, they’re holding their meetings in secret. But they even went a step further, because you had a reporter, Alex Lawson, who works with the group Social Security Works, who interviewed Senator Simpson as he’s going in or out of one of the meetings, and Simpson, you know, could not control himself, made this comment about “lesser people,” and it was rather insulting, used several curse words. And I guess to avoid having Senator Simpson embarrass himself again, they now not only have the meetings in secret, but they actually do not disclose the location, so that you won’t have another occasion where a reporter asks Senator Simpson questions and then he makes a fool of himself, essentially. So, again, this should be disconcerting.


AMY GOODMAN: Andy Stern, a key member of the deficit commission, is pushing to invest a significant portion of the Social Security Trust in private companies through the stock market on Wall Street.


DEAN BAKER: Well, what Stern — again, I don’t know the full reference, but the way this is usually talked about, and I assume this is what Stern meant, was that he would — that he would put some of the funds in an index fund, which, given that the stock market has plunged, people have asked me about it. I go, I don’t see a risk there, so I’m not particularly concerned about that one. I’m concerned about individual accounts. I’m concerned about cuts in benefits. But that you would put some of the trust fund in the stock market, I mean, you’d almost have to come up with like a story like the moon hitting the earth to say how that would give us worse returns than what we would otherwise get at this point. So, that one really doesn’t have me concerned.


AMY GOODMAN: Dean Baker, what about lifting the retirement age to seventy? What would be the effect?


DEAN BAKER: Well, this is a cut in benefits. And, of course, this disproportionately hits those who are at the bottom, who have shorter life expectancies, and also who don’t have the ability to make this up by working longer because they don’t have the health or they have harder jobs. It really is infuriating. You go around Washington, all the people talk about this. They’re all — you know, they have jobs like I do. I sit at a desk. I’m hoping I can work 'til seventy, maybe much longer. I like my job. I'm, you know, in good health. But you go around, you’ve got people working in a factory, people working in restaurants, you know, waiter, wait people. You look around at the jobs people have throughout society, the vast majority of those are not jobs where people could really look forward to working 'til age seventy. So this is really kind of a cruel joke on people. And again, one other point I just think we can't emphasize enough, people have paid for these benefits. So, we’re talking about taking away benefits people have paid for. Let’s use the word “tax.” Let’s call it a tax. I know that sends the right wing nuts. Let’s say they want to tax Social Security benefits, because that’s, in effect, what they want to do.


AMY GOODMAN: We’re going to leave it there, but we’re going to continue our conversation online just after the show. So people can go to our website at democracynow.org. Dean Baker, economist and co-director of the Center for Economic and Policy Research. Part two on the web.

Dog Whistle Politics: How Politicians Use Coded Racism to Push Through Policies Hurting All 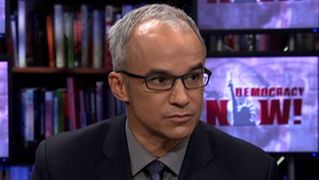 Dog Whistle Politics: How Politicians Use Coded Racism to Push Through Policies Hurting All