Nearly five years after Hurricane Katrina, federal prosecutors have charged a white man with federal hate crimes for his role in the racially motivated shooting of three black men in the aftermath of the storm. The five-count indictment accuses Roland Bourgeois of plotting to defend his Algiers Point neighborhood in New Orleans from “outsiders” including African Americans and shooting and seriously wounding three men who were walking toward a temporary evacuation center. [includes rush transcript]

StoryAug 26, 2015David Simon on Katrina Anniversary: New Orleans “May Be the Greatest Gift We Have to Offer”

SHARIF ABDEL KOUDDOUS: Nearly five years after Hurricane Katrina, federal prosecutors have charged a white man with federal hate crimes for his role in the racially motivated shooting of three black men in the aftermath of the storm. The five-count indictment, unsealed last week, accuses Roland Bourgeois of plotting to defend his Algiers Point neighborhood in New Orleans from, quote, “outsiders,” including African Americans, and shooting and seriously wounding Donnell Herrington, Marcel Alexander and Chris Collins, who were walking toward a temporary evacuation center.


A joint reporting project by the Times-Picayune, ProPublica and PBS Frontline interviewed people this year who implicated Bourgeois in the shooting. Terri Benjamin was an eyewitness to the shooting and told reporter A.C. Thompson what she saw and heard on September 1st of 2005.


A.C. THOMPSON: I want you to tell me about the incident that occurred in your neighborhood a couple days after the storm hit.


TERRI BENJAMIN: I heard the gun, the gunshot, so we started running towards my house, because I had family in the house, and we didn’t know what, you know, that gunshot was all about, if everybody was OK. And we ran up, and my neighbor was jumping up and down, hooting and hollering like he was big game hunting and he got the big one. And all of his friends were rallying him on, and they were cheering. And he screamed, “I got one!”


And I went to him, and I said, “What? Got one what?” And he said, “A looter.” One of his friends comes running up the street and said, “You got one, but he ain’t dead yet.” And he proceeded to run, with no shoes on, around the corner, wherever this man was laying down. After, I asked him — I said, “Roland, you don’t have to kill him. He’s already down. Just leave him alone. He’s going to die anyway. Just leave him alone.” And he said, “I’m going to kill that nigger.” And he went around that corner, and we heard the shot. I didn’t see him shoot him, but I felt it.


When he came back from shooting that man the second time, he at that point got this adrenaline rush in him, and he turned into somebody that I knew I couldn’t negotiate with very much further. He turned into an animal. It was like he got the taste of blood, and he was out for more. And I went to him and asked him to spare my cousin and my uncle’s life, who are African American, that would be walking up that street. And at that point, I knew it wasn’t safe for anything not white to walk up that street. And my neighbor looked at me and said, “Darling, anything coming up that street darker than a brown paper bag is getting shot.”


ATTORNEY GENERAL ERIC HOLDER: The Justice Department will hold those who violate the law responsible for their actions. Put simply, we will not tolerate wrongdoing by those who are sworn to protect the public. This will not stand. And we will hold all offenders accountable.

AMY GOODMAN: For more on the federal investigation into what’s occurred in New Orleans in the aftermath of Hurricane Katrina, we’re joined here in New York by a reporter who exposed key details about both the Algiers Point and the Danziger Bridge shootings. A.C. Thompson, a staff reporter at ProPublica, has been working on an ongoing series for PBS Frontline and the Times-Picayune on these shootings in New Orleans.


Welcome again to Democracy Now!, A.C. When you were here in April, this story of Roland Bourgeois was about to drop, was about to explode. So explain the latest on what’s happened to him.


A.C. THOMPSON: So, the federal government is saying there is a five-count indictment against Mr. Bourgeois, and it alleges that he was part of a group of people, a conspiracy of people, that ran for about two weeks to prevent African Americans from moving down the street to the Algiers Point neighborhood, and that they used force and threats of force to keep those African American people out of this neighborhood, which is largely white.


AMY GOODMAN: You know, when we were down after the hurricane, we went to a multicultural center, and there was a dead man there. And we did a whole piece on him. And I’m now wondering if he was ever identified.


A.C. THOMPSON: You know, that’s an unanswered question about this whole incident, is the government is saying, look, more than one person was involved in this, and it wasn’t just Donnell Herrington, Chris Collins and Marcel Alexander who got shot, or it wasn’t just them that were threatened. We believe that more people were threatened with violence, or perhaps were victims of violence. And we don’t know who else yet might have been shot, injured or killed during that time period. But there are worrisome signs, like that body that was there; like the people who have told me, “Oh, I saw two or three or four bodies, that I believe to have been shot, laying around that area”; and like the people like Reggie Bell, who said to me, “I was threatened, walking through this neighborhood to my house. I’m an African American man. These white men with guns repeatedly threatened me and told me to get out of this neighborhood.”


SHARIF ABDEL KOUDDOUS: And it’s astounding, this clip we heard of the eyewitness, Roland Bourgeois’s neighbor, Terri Benjamin, saying that he fired the shots, then went back and said he’s going to kill this person. Can you just explain exactly what happened?


A.C. THOMPSON: What Terri told me is, she said the incident unfolded like this. She heard a shot, and she ran to the intersection where she had lived, and she saw a group of men there. One of them was Roland Bourgeois. And he was told, “Oh, the guy that you just shot, he survived.” And so, Mr. Bourgeois, according to Benjamin, ran after this person, who was around the corner, and went to shoot him again. Now, we now know that that person was Donnell Herrington, according to the federal indictment and according to my reporting, and he survived. But her allegation is Bourgeois went to kill him. And what the federal government is saying in its indictment is he came back with a bloody baseball cap that Donnell Herrington had been wearing, that had been on his head, and showed it around to people. And it sounds like he waved it around like it was a trophy.


AMY GOODMAN: Where does this case go from now? We’ve got the two, the police shootings and this.


A.C. THOMPSON: You know, what we’re going to see is, there’s the possibility that we’ll see more indictments in this matter. Like I said, it’s not — there is a conspiracy alleged here, but only one person has been charged so far. And then, when it comes to the police shootings, there were at least eleven people who were shot in the week after Hurricane Katrina by police officers. What we’ve seen are charges against sixteen current and former officers in two cases: the Danziger Bridge case and the case of Henry Glover, who was allegedly shot and was definitely burnt up, allegedly by police. What we may see is further charges in cases involving Danny Brumfield, who was shot in the back by police; Matt McDonald, who was shot in the back; and, as well, Keenon McCann, who was shot and survived. We know those cases are under investigation; we don’t know if there’ll be charges yet.


AMY GOODMAN: We have ten seconds. Why did it take the Justice Department, what, more than five years to do this? Did it all come from your reports?


A.C. THOMPSON: You know, in part, the Justice Department got into these cases because they saw media reports, including mine, that suggested something was out there. And now, to a certain extent, they chasing these stories, because local authorities have not.


AMY GOODMAN: We want to thank you, A.C. Thompson, for all that you’ve done, staff reporter at ProPublica, working on an ongoing series for PBS Frontline and Times-Picayune on the post-Katrina shootings in New Orleans. 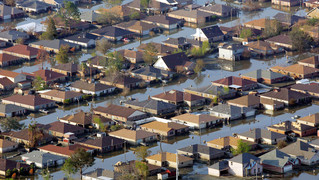