Indian troops and police have killed fifteen people in Kashmir since June, sparking widespread protests. The Indian government has imposed a strict military curfew in the area as well as a media gag order on local journalists. The international community has remained silent on the human rights abuses in Kashmir. We speak with Kashmiri journalist Basharat Peer, author of Curfewed Night: A Frontline Memoir of Life, Love and War in Kashmir. [includes rush transcript]

ANJALI KAMAT: We turn now to Kashmir, where tensions are running high. Since June, Indian troops and police have killed fifteen people, sparking protests across Kashmir. The Indian government has imposed a strict military curfew in the area, as well as a media gag order on local journalists.


The international community has remained silent on the human rights abuses in Kashmir. On Monday, US Secretary of State Hillary Clinton addressed the issue at a press conference in Pakistani capital of Islamabad. She rejected Pakistan’s request to mediate in the Kashmir conflict, calling it an impediment to Indian-Pakistani relations that the United States cannot solve.


AMY GOODMAN: For more, we’re joined here in New York by the Kashmiri journalist and author Basharat Peer. His memoir of growing up in Kashmir is called Curfewed Night: A Frontline Memoir of Life, Love and War in Kashmir. He is currently a fellow at the Open Society Institute and recently returned from a trip to Kashmir.


Welcome to Democracy Now! Tell us what’s happened in the last month.

BASHARAT PEER: Thank you for having me here.


It’s been a series of protests, which started with — I mean, the cycle goes back, but the recent protests of like thousands of people coming out on the streets were triggered after a young high school student was shot by the Indian paramilitary forces, who were deployed there to control the Indian-controlled part of Kashmir. There are around half-a-million Indian soldiers and paramilitary troops deployed in the Kashmir region to keep it under control.

AMY GOODMAN: Could you step back for a minute and just, for people who are not familiar with this conflict, even saying “Indian-controlled Kashmir,” give us the map of this area?

BASHARAT PEER: So, Kashmir region is controlled — is divided in two parts. One is controlled by India, and the other is controlled by Pakistan. This happened soon after India and Pakistan became independent countries and fought their first war over Kashmir, where the UN ordered — got them to agree on a ceasefire. And the ceasefire line that divides the old Kashmir state into two parts is called the Line of Control. And the current troubles are in the Indian-controlled part of Kashmir, where the main capital, the main city, is Srinagar, and that’s where — what has been the hub of these protests and the civilian deaths, killings by soldiers.

ANJALI KAMAT: Well, how many people have died in the past few months?

BASHARAT PEER: In the past month, by now, it’s seventeen. Just two days back, a boy who was chased — a protester who was chased by the police sort of drowned in a river, and then his body was carried out in this north Kashmir town called Baramulla. And there was a big funeral protest, and the police and paramilitary fired on the funeral, and one more person was killed, and around twenty people were injured. So, it’s gone up to seventeen, and the place is completely under a military lockdown.

AMY GOODMAN: What are people calling for?

BASHARAT PEER: The slogan on the streets, the demand is independence. And that has been the old Kashmiri demand. But more — that’s sort of the long-term political desire. But the more urgent demand is something that can be done, that India can do in a day, is to repeal these two very unpopular laws. One is called the Disturbed Areas Act, and another is called Armed Forces Special Powers Act. These laws essentially give complete legal immunity to any Indian paramilitary trooper or soldier deployed in counterinsurgency in Kashmir. If they suspect any person of being a threat, they can shoot and kill, and they cannot be tried in a civil court of law, even if the person turns out to be an eighth-grade student, which has happened, which happened recently when I was in Kashmir. There was an eighth-grade student who was killed when the police fired, and then there were protests. And two days later, there was a high school student who was killed. And I met his father, and he was fighting the case in the courts. And in one of the rare moments, that police — the paramilitary officer had been arrested, but they couldn’t really fight the case properly, because to waive the immunity that soldiers have in Kashmir, India’s Home Ministry needs to — and Defense Ministry — need to give permission to the local government to prosecute these people. And there are 458 cases so far in which families and courts in Kashmir are still awaiting the permission from higher authorities in India to prosecute soldiers known to have killed civilians. And the permission has been denied in all cases. So it is crucial that this law — and it has even been recommended by committees formed by India’s Prime Minister Manmohan Singh in 2006, which recommended that these laws should be scrapped, as they abuse all civil rights.

ANJALI KAMAT: Basharat, in your memoir, Curfewed Night, you talk growing up in the shadow of militancy. Talk about how the landscape of protest has changed in Kashmir, from militant groups to now, this intfada-style uprising, with young boys on the streets throwing stones.

BASHARAT PEER: Anjali, the big turn happened in — like, sort of in a post-9/11 world. The insurgency against Indian rule had been going on for — since 1990. But by then, there was the combination of two factors that, by 2004, we saw the fighting waning, was that India had a huge counterinsurgency campaign, which was accompanied by widespread human rights abuse. But it was a military success, so most of the Kashmiri rebels were either killed or had laid down their arms. And Pakistan used to send in Islamist militants from across the border. But under Musharraf, they, too, cut back support to those troops. So the general level of violence had come down in Kashmir by 2004, 2005. And that was slightly opening space for people to live in a lesser degree of fear and to raise their voice.


And then all the repression of this whole time since 1990 seemed to explode in 2008, when there was a land dispute with the government, which triggered, like, major protests. Like hundreds and thousands of people were on the streets. It was the biggest protest calling for independence in Kashmir since 1990. And I think that was a big move, which sort of had the shift from violent politics to nonviolent politics. But unfortunately, those protests were like put down with the gun. Around sixty protesters were shot, and around 600 people had bullet wounds. But after that, I think we didn’t have as many peaceful protests, but youngsters, who saw the peaceful protest being put down, picking up the stone and, you know, being inspired by various global examples of protest, where, you know, basically frustrated civilians pushed for political demands using stone throwing. And that’s being going on since 2008.

AMY GOODMAN: Basharat, what about the US stance? I remember when President Obama was running for president, he said Kashmir is a key flashpoint that must be resolved between India and Pakistan.

BASHARAT PEER: President Obama did. It was after — I think after Kennedy, President Clinton briefly mentioned Kashmir, but it was after a long time that an American president, in all honesty, actually talked about Kashmir in a serious way. But he came, and he appointed Ambassador Holbrooke as a special representative to Afghanistan and Pakistan, and his brief was — the talk was that it will also include Kashmir. But India is traditionally very resistant to any outside interference, and India lobbied very hard not to have Americans talk about Kashmir, and Americans did back off.

AMY GOODMAN: What do you think the US should do now?

BASHARAT PEER: I think the US should talk about the human rights situation in Kashmir, as any civilized country should, and also encoursge India and Pakistan to include Kashmiris in the talks and move forward in peace talks. US can’t, you know, force a solution on the two countries, but I think it’s important to raise the questions of having a whole population under a military lockdown and having laws on the books which essentially permit — give people license to kill.

AMY GOODMAN: We want to thank you for being with us. We’re going to continue this conversation right after the broadcast, and people can go to our website at democracynow.org to hear the second part. Basharat Peer’s book is called Curfewed Night: One Kashmiri Journalist’s Frontline Account of Life, Love and War in His Homeland. 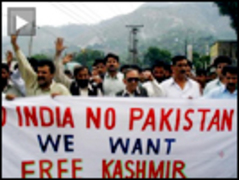