In his State of the Union address, President Obama defended his healthcare overhaul and invited Republicans to help him move forward with essential fixes to the law. We hear from Dr. Atul Gawande, a surgeon at Brigham and Woman’s Hospital in Boston, staff writer at The New Yorker magazine and an associate professor at Harvard Medical School. “There’s leadership needed to give meaning to the policies for the public and to explain what the value is,” Gawande says. “[Obama] allowed the opponents to brand every one of those policies as failures, even though they passed.”

StoryJan 05, 2010Dr. Atul Gawande on Real Healthcare Reform, Why Solitary Confinement Is Torture, and His New Book, “The Checklist Manifesto”

AMY GOODMAN: I wanted to turn to Dr. Atul Gawande. He is well known, a staff writer for The New Yorker, a doctor in Boston. We asked him about the issue of healthcare overhaul. In the State of the Union address, President Obama defended his healthcare overhaul and invited Republicans to help him move forward with essential fixes to the law.

PRESIDENT BARACK OBAMA: Now, I have heard rumors that a few of you still have concerns about our new healthcare law. So let me be the first to say that anything can be improved. If you have ideas about how to improve this law by making care better or more affordable, I am eager to work with you. We can start right now by correcting a flaw in the legislation that has placed an unnecessary bookkeeping burden on small businesses.

As we speak, this law is making prescription drugs cheaper for seniors and giving uninsured students a chance to stay on their patients’ — parents’ coverage.

So I say to this chamber tonight, instead of re-fighting the battles of the last two years, let’s fix what needs fixing, and let’s move forward.

AMY GOODMAN: That was President Obama in his State of the Union address. A few weeks ago, I spoke to Dr. Atul Gawande, the surgeon at Brigham and Women’s Hospital in Boston who’s a staff writer at The New Yorker magazine, and I asked him to assess President Obama and his whole approach to healthcare reform and to talk about how President Lyndon Johnson passed Medicare legislation 40 years ago.

AMY GOODMAN: What was the clincher that secured Medicare, which they do seem to be trying to unravel right now, even now, 40 years later?

DR. ATUL GAWANDE: Presidential leadership. I told about the president sending inspectors into the South and confronting the hospitals that were — basically a stare-down that occurred. But with the physicians, he was more conciliatory.

He had this amazing moment where the president of the American Medical Association came to the White House to explain that the AMA was going to vote on potentially boycotting Medicare as a whole. And the president sat down with the leaders, and they came to the Oval Office. And so, he sat down, and almost — they were about to start talking, and he stood up. And when the president stands up, you stand up. And so, they all stood up, and then he sat down. And then they sat. They were about to talk again, and then he stood up again, and he scratched his belly, and they waited, and then he sat down again. And then he did it a third time, and suddenly it was clear who was in control of this meeting.

And before they could even start talking, he said, “You know what I’m worried about? I’m worried about Vietnam. You know, the citizens there, the civilians, we see terrible healthcare problems there. Do you think the American Medical Association would be willing to help us with a volunteer corps of doctors to help the civilians in Vietnam?” And the president of the AMA said, “Absolutely. We’d be happy to do that.” And he said, “Great! Let’s call the press in here, have a press conference right now.” Got the press in, explained that the AMA is going to back this voluntary program to send doctors to Vietnam.

And then, of course the next questions from the press were, “Well, what about this boycott we hear is going to happen?” And the president says, “You mean to tell me that these doctors, who would volunteer to help the poor in Vietnam, wouldn’t help our elderly here at home?” and turned to the president of the AMA and said, “You tell them what you think.” And the president of the AMA said, “Well, we will support Medicare.” And they entered a period of several months of a negotiation that led to “improving” amendments, but moved them from total opposition to talking about how to get them under the fold so that you could make this thing work.

Only thing that can move the public to recognize the value and the meaning of what we have with policy — we will have the battle back and forth between pro and con and so on — but the only person who can lead that same kind of experience is going to be the president.

SHARIF ABDEL KOUDDOUS: Well, what did you think of his leadership in the healthcare reform debate?

DR. ATUL GAWANDE: I was frustrated by it. The leadership with Congress was incredible — getting the votes, getting the detailed understanding of what you need to get everybody together. It was a Lyndon Johnson masterful performance. In fact, the whole year has been an incredible Congress that has been able to pass all kinds of blocked reforms that have been important to make some progress on. But you also have a role — there’s leadership needed to give meaning to the policies for the public and to explain what the value is. And that communication, from one of our great communicators in the campaign — I’m not sure the reasons why; I understand the energy is divided between trying to focus on the congressional job and so — but it allowed the opponents to brand every one of those policies as failures, even though they passed. And that — and it’s not just about branding. It’s about being able to tell the story of where we have been, where we are going, and help people understand the vision of what we — of what we need for the economy, for healthcare, and so on.

AMY GOODMAN: That was Dr. Atul Gawande, a surgeon at Brigham and Women’s Hospital in Boston, staff writer at The New Yorker magazine.

Harry Belafonte on Obama: “He Plays the Game that He Plays Because He Sees No Threat from Evidencing Concerns for the Poor”

NEXTHarry Belafonte on Obama: “He Plays the Game that He Plays Because He Sees No Threat from Evidencing Concerns for the Poor” 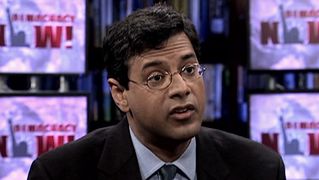 Dr. Atul Gawande on Real Healthcare Reform, Why Solitary Confinement Is Torture, and His New Book, “The Checklist Manifesto”