Shane Bauer, Josh Fattal and Sarah Shourd, the three American hikers once imprisoned in Iran, made a surprise visit to Occupy Oakland on Monday, less than a month after Bauer and Fattal were released from prison. In July of 2009, the three were arrested while hiking near the Iran-Iraq border. Shourd was released last year. On Monday, the hikers were welcomed by a thrilled crowd of supporters at Occupy Oakland. “These occupations were just starting when we got out, started in New York City, and we were hearing about it, little bit by little bit. But it wasn’t until getting back here to this city [Oakland] that it really hit me that this is serious,” Bauer said. “This is big. And I feel proud of it. I feel proud of it, of this happening in my city.” Bauer also criticized Iran for pressuring Masoud Shafii, his former attorney in Iran. Shafii was recently arrested and denied the right to travel abroad. [includes rush transcript]

Web ExclusiveMar 17, 2014READ: Excerpt from “A Sliver of Light” Ahead of Tuesday’s Extended Interview with Iran Hikers

AMY GOODMAN: Shane Bauer, Josh Fattal and Sarah Shourd, the three American hikers now all free and united, made a surprise visit to Occupy Oakland on Monday. In July of 2009, Shane Bauer and Josh Fattal were arrested, along with Sarah Shourd, while hiking near the Iran-Iraq border. Bauer is a freelance journalist who has contributed to Democracy Now! and other media outlets. Fattal is an environmental activist. Sarah Shourd was released last year. Shane and Josh were freed late last month. After two years in captivity, much of it in solitary confinement, the thee hikers were welcomed by a thrilled crowd of supporters as reporters jockeyed for position and a news helicopter hovered overhead.

SHANE BAUER: It’s great to be back in Oakland. You know, we got out—we got out of prison over three weeks ago. We were hostages, Josh and I, for 26 months, and Sarah for 14 months. And coming home to this, I mean, we came back to this country a couple weeks ago, but this feels like coming home, coming home to Oakland, coming home to this. This is amazing, you guys. This is really amazing. To come back and see our country coming back to life and see this city coming to life like this is really, really a wonderful homecoming. A lot of people here fought for us and fought—supported our families and struggled nonstop to get us out of prison, and I want to thank you guys for doing that, for standing by us.

SHANE BAUER: This is the perfect place to celebrate our freedom. We’ve been here for a couple days, and feels like this city is a part of me, it’s a part of my heart, and to see this happening is just—I can’t tell you how incredible it feels.

I wanted to mention one person that is very important to us, who has not been able to celebrate our freedom like we have. This person is—his name is Mr. Masoud Shafii. He was our lawyer in Iran. And he—for 26 months, he tried to defend us courageously and skillfully, as best as he could within Iranian law, and he had a very difficult time. And now that our case is over, we’ve been released and sent home, he is not able to celebrate. He has been living under fear of prosecution—persecution since we’ve been freed. He was arrested. He tried to leave the country to come here to see his family, and he wasn’t able to. His passport was taken. He’s constantly under the threat of being put in prison. And, you know, we stand behind him. He defended us. And he, this man, you know, he’s a lawyer, and he’s doing his job. He’s working within the law. And he doesn’t—now that we’re out, we’re free, and we’re speaking, and we’re here talking to you guys and, you know, saying what we want to say around the country, and, you know, he doesn’t have anything to do with it. He’s not influencing us. He doesn’t have any control over us. I just wanted to say that and just say that we’re thinking about him and that we love him.

You know, we were in prison, Josh and I, for 26 months, and we came out. And when we got out, we heard—I mean, this—these occupations had just—were just starting right when we got out, started in New York City, and we were hearing about it, little bit by little bit. And then—but it wasn’t until getting back here to this city that it really hit me that this is serious, this is big. And I feel proud of it. I feel proud of it, of this happening in my city.

But, you know, another thing that we learned when we got out is that there—here in California, there have been thousands of people on hunger strike in prison. You know, nobody—nobody can come out of prison, especially come out of the situation of isolation, solitary confinement, and not feel for other people in that situation. And these people, you know, there have been—from Pelican Bay, thousands of people went on hunger strike, and it’s spread throughout California. This is incredible, you guys. This is really incredible. These people are struggling, like we had to struggle in Iran, for change in their conditions. You know, we lived through solitary confinement. This is psychological torture. And they’re living through that, and they’re struggling to change that. Every day, there’s at least 20,000 people in this country that are in solitary confinement. I can’t tell you guys, standing here right now, what it means to be in solitary confinement. It’s hell. And no person should have to live—live that.

And now, recently, we’ve learned that Pelican Bay hunger strikes have stopped for the time being, because their demands—they’ve been promised by the California Department of Corrections and Rehabilitation that the process of how people get put in solitary confinement, or the SHU, is going to be reviewed. And we hope—I hope—that this is really going to happen, and, you know, these people aren’t going to have to go back on hunger strike, they’re not going to have to starve themselves. You know, in prison, that’s the only way to be heard; the only way to be heard is to threaten that you’re going to die. I mean, this is crazy, you know? This is crazy. And we really hope that this promise will be fulfilled.

So I just want to say that, you know, inside prison, we—a lot of people here, like I said before, were supporting us and were fighting for our freedom, and we felt that. And it really is what made me get through every day. And I know that the people in prison in California now are feeling that. You know, if people here are supporting them, they’re going to feel it. And I really want to commend this camp for passing a resolution yesterday in the General Assembly in support of the hunger strikers in California. And I want to say, you know, Pelican Bay, they’ve stopped for the time being, but hunger strikes continue in Calipatria and Salinas, and I want the people there to know that my heart goes out to them and that I’m with them, and that everybody here, I think we could say, is with them. Thank you, guys. 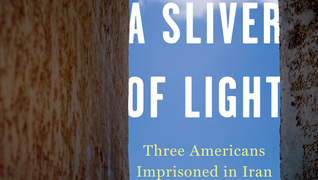 READ: Excerpt from “A Sliver of Light” Ahead of Tuesday’s Extended Interview with Iran Hikers