Oakland police stormed the Occupy Oakland protest encampment outside City Hall just before 5:00 a.m. PDT. Police lobbed flash grenades and reportedly fired tear gas. Initial reports say at least 70 people have been arrested and the police tore apart the protest camp. We get a live report from the park by legal observer Marcus Kryshka. Nearly 2,500 people have now been arrested in protests since the start of Occupy Wall Street movement on September 17. [includes rush transcript]

AMY GOODMAN: We go directly to Occupy Oakland right now for the latest developments. Marcus is a legal observer. Marcus, what are you seeing there, and where are you?

MARCUS KRYSHKA: Right now I’m on the corner outside of Occupy Oakland. The police came in very quickly. They kept all the media and all the legal observers out of the area. They quickly, some, swept in, and it seemed to us like they arrested everybody very quickly. We saw some people being carried away, some people being dragged away, but all of this being done without any kind of real chance to observe. The media was all kept a block away, as well as the legal observers. Anybody who was in the park was told that they would be arrested summarily if they stayed in the park.

AMY GOODMAN: Marcus, can you—

MARCUS KRYSHKA: The police—the police came in. They tore down the tents. They tore down the food tent, the information tent. They just weighted the tents, destroying the tents, and grabbing everybody that they could and anybody who—you know, and basically encircled folks and then just arrested people and tore down the tents as they swept through the crowd. Right now it appears that there are no more Occupy Oakland people in the park. It’s entirely the police moving through, continuing to destroy the tents and the rest of the material in the park.

AMY GOODMAN: Can you talk about the use of flashbang grenades? What else was used to clear the park? Tear gas? Pepper spray?

MARCUS KRYSHKA: I did not see any of that. They certainly could have used that, but none of that—I didn’t observe any of that happening. Again, remember that as the police came in, they kept the rest of us about half a block away from where—from what was going on. So all that I saw was the condition of people as they were being brought out of the park, but I was not able to see what actually happened in the park.

AMY GOODMAN: Marcus, how many people had been in the park?

MARCUS KRYSHKA: It seemed to me that there were—it’s dark, so it’s hard to tell. It seemed to me that there were approximately a hundred to 200 people in the park. They had put a warning out. A number of community members, union organizers, different community organizers, had come down to the park starting at about 3:00 a.m., as the warning went out. So, definitely, the numbers swelled, and I would guess that there were probably about 200 people in when the police first approached.

AMY GOODMAN: KRON is reporting all tents have been taken down, at least 70 people arrested, Marcus.

MARCUS KRYSHKA: OK. They know more than I do. The police aren’t telling us anything.

AMY GOODMAN: And explain just where, for people around the country and around the world not in Oakland, where Occupy Oakland is.

AMY GOODMAN: Were there warnings about this yesterday or last night at the encampment?

MARCUS KRYSHKA: The police have—the police have been delivering notices. I’m unclear exactly what those notices said. I don’t know about the legality of the notices. I can’t speak to that. But we—I have heard rumors that the police had delivered written notices.

MARCUS KRYSHKA: I also noticed—when I came over there tonight to assist them, I noticed that a lot of the complaints had been about the fire code. And they had removed all of their cooking material. They had removed a lot of the wood from the site. So it seemed to me like they had sort of—that they had tried to comply with everything that was asked of them.

AMY GOODMAN: Do you see any protesters right now?

MARCUS KRYSHKA: There’s a few protesters left outside watching, watching the police, trying to observe the police. But that’s all that I—I can see about 30 people, and I can hear a marching band in the distance. So somebody is still protesting, but I can’t see them. They’re on the other side of the police line.

AMY GOODMAN: KRON is saying that police may soon hold a news conference, so we will get the latest news there. And Marcus, thank you for joining us, legal observer at Occupy Oakland. Can you give us your full name? Do you feel comfortable doing that?

AMY GOODMAN: Thank you very much for being with us, Marcus. We’ll keep people posted as we find out information. According to @occupyarrests, as of yesterday, 2,428 people had been arrested nationwide since the start of Occupy Wall Street. Clearly, those numbers will now go up with this clearing out of Occupy Oakland, at least at this point. We are broadcasting just after 5:00 a.m. Pacific time. That’s when this raid has taken place in Oakland. 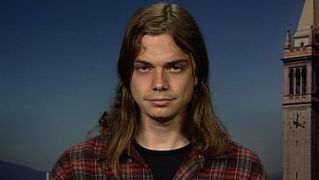