This week the Occupy movement drew thousands of California college students to protests on at least 10 campuses, including UC Irvine, UCLA and UC Berkeley, where police forcibly removed students and arrested 39 people. The University of California system faces some of the steepest budget cuts and tuition hikes in the nation. Tuition and fees could increase by 81 percent over the next four years. This fall, students saw tuition hikes just a few weeks before their classes began. Here is the full report from John Hamilton, part of which was featured in today’s Democracy Now! show.

MARIO SAVIO: So here we are. Four students are getting the axe…

JOHN HAMILTON: UC Berkeley’s Sproul Plaza first drew national attention in 1964, when thousands of students struggled for their right to free speech on campus. They were led by student activist Mario Savio.

MARIO SAVIO: There’s a time when the operation of the machine becomes so odious, makes you so sick at heart, that you can’t take part, you can’t even passively take part.

JOHN HAMILTON: Nearly a half-century later, a strikingly similar scene played out Wednesday between students and faculty, on one hand, and the university and its police, on the other. On a statewide day of action in support of public education, thousands of UC Berkeley students flooded Sproul Plaza. Dozens were beaten back by police after they tried to erect a tent encampment, like those of the Occupy Wall Street movement.

Shannon Ikebe is a graduate student in Berkeley’s Sociology Department.

SHANNON IKEBE: We gathered at Sproul Hall over there to set up a camp. And many activists from the Public Education Coalition had tents, and we decided to establish a couple of tents there.

JULIE KLINGER: We were organized by the General Assembly to get into groups to talk about what we might do, what we might not do. But we resolved, as a community, to be nonviolent, to maintain and abide by the principles of civil disobedience that have a long and beautiful history in this country, going back to the civil rights movement and far beyond that. So what we did is we formed what you might call a soft bloc. We stood together, we linked arms, and we prepared for the police to approach to take down the tents.

POLICE OFFICER: This is an unlawful assembly. In the name of the people of the state of California, we demand all those at this location to immediately disperse.

STUDENT PROTESTER: We’re trying to stick up for this country, the state and the school.

JOHN HAMILTON: As students linked arms to protect their newly erected encampment, police in riot gear moved in. Among those on the front lines were students Andrea Barrera and Ramon Quintero.

RAMON QUINTERO: As I was holding my arms with my fellow students here on campus, the UCPD charged.

ANDREA BARRERA: I was thrown to the ground and beaten with a baton. Police were beating my legs, even though I wasn’t fighting back and I wasn’t resisting. They hit me so hard with the baton on my shin that a chunk of skin had actually come off, and I was bleeding profusely.

RAMON QUINTERO: They tore the clothes off of me, because they couldn’t grab me, grabbed me by the hair, three of them. They pulled me out of the line of students, which we were like holding hands in peaceful demonstrations. And then, they put me down, and three UCPD got on top of me. And one of them used a rifle, the rifle that they use to shoot the pepper spray, and that officer hit me in the head. When I asked the officers, the UCPD officers, why I was being detained, they themselves told me, “We don’t really know who arrested you. We don’t even know what the charges are. But we’re going to process you eventually.”

VICE CHANCELLOR HARRY LE GRANDE: If there are encampments, they will be removed.

JOHN HAMILTON: Many students worried the extraordinary police violence had eclipsed the reason that thousands of students had come out to protest, reasons like skyrocketing student fees. Again, Julie Klinger.

JULIE KLINGER: Over the past several years, we have seen a significant retreat of state funding and a significant increase in student debt. We’ve also seen how this has affected the demographics that are able to attend this university. Currently, we are facing the prospect of an 81 percent increase in our tuition to be locked in over the next two years. And this comes already after an over 300 percent in our tuition over the past decade. So this would make in-state tuition for a UC Berkeley student go over the $20,000 mark. And this doesn’t include living expenses in one of the most expensive areas of the country and the world—room and board, books, transportation, supplies. So, what we’re facing here is the prospect of a public education costing upwards of $50,000 a year. In a democratic country, in a democratic society, this is absolutely anathema to everything we are supposed to stand for. This is absolutely anathema to everything that is enshrined in the Constitution and the Bill of Rights and the Master Plan. 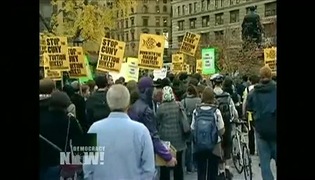