PHOTOS: Sailing Toward Gaza Aboard the Canadian Boat Tahrir With Freedom Waves Flotilla

See photos below of some of the activists aboard the Canadian boat, Tahrir, now sailing in international waters toward Gaza. One of two boats in the Freedom Waves Flotilla, its passengers include representatives from Australia, Canada, the United States, and Palestine. Thanks to Democracy Now! correspondent Jihan Hafiz for sending these photos from aboard the boat. 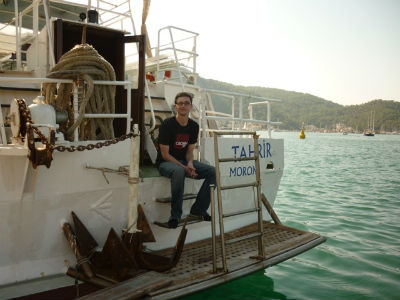 (Above) Michael Coleman, Australian representative on the Freedom Waves flotilla boat Tahrir, aboard the boat Tahrir before it quietly sailed from a Turkish port today toward Gaza. Coleman was on the Tahrir this Summer and became known as the 'kayaktivist' after he obstructed the Greek coast guard with his kayak as they tried to stop the boat from sailing to Gaza. (Above) Australian Michael Coleman works aboard the Freedom Waves flotilla ship Tahrir as it sails from a Turkish port today toward Gaza. (Above) Canadian activist and professor, David Heap, working aboard the Tahrir as it sails toward Gaza with the Freedom Waves Flotilla. As the boat left port in Turkey he sent Democracy Now! an exclusive update shortly before 9a.m. EDT: “We have reports that Freedom Waves to Gaza has left a port in eastern Mediterranean and is heading to international waters within a few hours.” 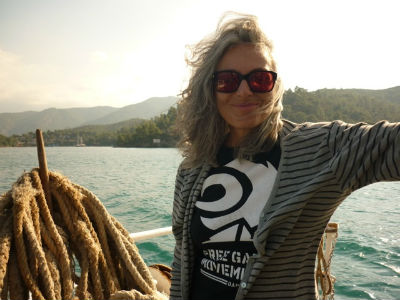 (Above) American activist, Kit Kittredge, aboard the Tahrir as it sails toward Gaza on Wednesday. She is a member of the peace group, CODEPINK. 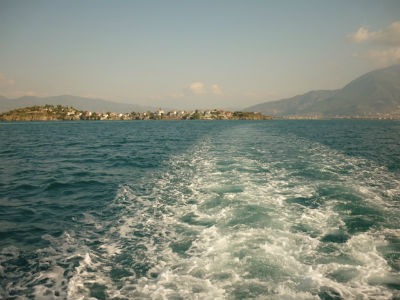 (Above) Turkey fades into the distance as the Tahrir sets sail for Gaza with the Freedom Waves Flotilla on Wednesday.

Web ExclusiveOct 19, 2012Audio: Aid Boat Seized as It Approached Gaza Tells Israel: “We Are Not the Provocateurs”