Clashes have erupted in Bahrain ahead of today’s release of a report that investigates the crackdown on the pro-democracy uprising earlier this year. The Bahraini monarchy commissioned the supposed independent probe after crushing protests with the help of troops from Saudi Arabia. At least 26 people were killed, more than 1,500 people were arrested, and thousands lost their jobs when protests erupted in February. Bahraini activists have questioned the report’s credibility.

For more on the situation, Democracy Now! correspondent Anjali Kamat spoke to Bahraini activist Ala’a Shehabi who was briefly in Cairo last month. She is the wife of a Bahraini political prisoner seized and jailed during the uprising. 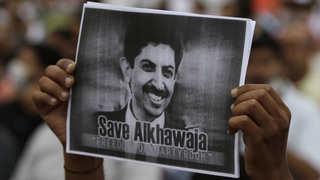