We are broadcasting from Durban, South Africa, in our week-long exclusive at the United Nations Climate Change Conference. Talks have entered their 10th day, but doubt is growing that a legally binding deal to combat climate change will be reached by Friday. On Tuesday, United Nations Secretary-General Ban Ki-moon acknowledged that such a deal is “beyond our reach” for now due in part to the global financial crisis. But Ban urged world leaders to preserve the Kyoto Protocol, which binds some of the largest historical polluters to binding emissions cuts. [includes rush transcript]

AMY GOODMAN: We’re broadcasting from Durban, South Africa, in our week-long exclusive at the United Nations Climate Change Conference. Talks have entered their 10th day, but doubt is growing that a legally binding deal on climate change will be reached by Friday. On Tuesday, United Nations Secretary-General Ban Ki-moon acknowledged that such a deal was, quote, “beyond our reach” for now due in part to the global financial crisis. But Ban urged world leaders to pressure—to preserve the Kyoto Protocol.

SECRETARY-GENERAL BAN KI-MOON: Without exaggeration, we can say the future of our planet is at stake—people’s lives, the health of global economy, the very survival of some nations. The science is clear. The World Meteorological Organization has reported that carbon emissions are at their highest in history—and rising. The Intergovernmental Panel on Climate Change, IPCC, tells us unequivocally that greenhouse gas emissions must be reduced by half by 2050 if we are to keep the rise in global temperature to two degrees since pre-industrial times. And therefore, I urge you to carefully consider a second commitment period under the Kyoto Protocol here in Durban.

AMY GOODMAN: Several of the world’s largest polluters are threatening to pull out of the Kyoto Protocol that binds the largest historical polluters to binding emissions cuts. Canada, Japan, Russia, Australia and New Zealand have all indicated they might not agree to more binding emissions cuts after 2012. The United States also opposes Kyoto, a treaty the U.S. never ratified even though the United States is the largest historical emitter of greenhouse gas emissions. While China is now the world’s largest emitter, the United States remains a larger emitter than China on a per capita basis. Although China is not bound by the Kyoto Protocol, its negotiators have said for the first time they may be willing to accept legally binding emissions targets by 2020 if the Kyoto Protocol is not abandoned. Xie Zhenhua is China’s chief climate negotiator.

XIE ZHENHUA: [translated] We accept a legally binding arrangement, with preconditions. Here are the five preconditions. First is a common, but different, principle: a fair and appropriate capacity to ensure the protection of the global environment. Each country should show responsibility in accordance with its developmental stage and capabilities. We would like to commit to this kind of legal document.

AMY GOODMAN: The United States, which has been accused of blocking progress on a binding climate deal, downplayed China’s announcement. Todd Stern is the U.S. special envoy for climate change.

TODD STERN: If they now agree that they would do a legally binding agreement post-2020, I think that’s the thing that I don’t think that they’re going to do, as best as I can understand it. And so, I—you know, I discussed the various kind of aspects of what I think a legally binding agreement will need to include at such time as it were to come into effect. I discussed that yesterday. I think the essentials are that it would have to cover all the major parties in a full way, so that it would bind with equal legal force.

AMY GOODMAN: Chief climate negotiator Todd Stern, the top U.S. official here at the climate talks in Durban. President Barack Obama, like most other world leaders, had decided not to attend the climate talks. U.S. lawmakers have also stayed away, with the exception of Republican Senator James Inhofe, a chief climate change denier. He’s scheduled to speak at a news conference in a few minutes. 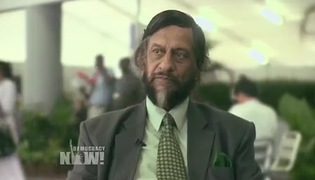