Wanjira Maathai: U.S. Should “Shape Up or Get Out” at U.N. Climate Talks

Wanjira Maathai is the daughter of the late Kenyan environmental activist and Nobel Peace Prize laureate Wangari Maathai, and the international director for the Green Belt Movement. At the U.N. Climate Change Conference in Durban, Wanjira says of the United States: “Shape up or get out… The United States should be providing the leadership … yet they’re really putting blocks on what would be for African nations a really life and death situation… We appeal to them to really look beyond their own selfish gains. They’re going to probably have come to the rescue, if we get more famines of the scale that is in the Horn of Africa. So the devastation is not worth waiting for. Let’s act now.” [includes rush transcript]

AMY GOODMAN: I spoke with Wanjira Maathai, daughter of the Kenyan environmentalist, Nobel Peace Prize winner, Wangari Maathai, who just recently died. Wanjira, her daughter, is the international director for the Green Belt Movement. I spoke to her yesterday during the climate talks here and asked her what she had to say to the United States in the context of the talks.

AMY GOODMAN: The U.S. here is talking about the year 2020. The U.S. negotiated very hard around Kyoto, weakened Kyoto, and then ultimately did not join Kyoto, and now are trying to prevent, they say until 2020, any kind of mandatory regulation of greenhouse gas emissions. Can we afford that now?

WANJIRA MAATHAI: We certainly can’t afford that, Amy, because the International Energy Agency—I think I just read that today—has said that, by 2017, we’re going to already surpass the two degree limit for—the two degree increase in climate, that would probably bring about some catastrophic climate change effect. So we really don’t have—we don’t even have 2020 to wait. We’re talking about in the next few years, we’ll begin to see some catastrophic effects of climate change—

WANJIRA MAATHAI: —if nothing doesn’t happen. Well, intensified floods, we’re already seeing that. Droughts, you know, in the Horn of Africa are becoming famines. People are dying in numbers that have not been seen, because, you know, we’ve had droughts. They’re cyclical; they come every year. But when droughts become famines, then those are effects that adaptation is—we can’t even adapt fast enough to the effects like that.

AMY GOODMAN: And so, what do you say to the United States here?

WANJIRA MAATHAI: Shape up or get out. I mean, honestly. It’s just, the stalling of the negotiations is extremely depressing, because we—the United States should be providing the leadership, Canada, yet they’re really putting blocks on what would be for African nations a really life and death situation. And so, we really appeal to them. And yet—they never listen anyway, but we appeal to them to really look beyond their own selfish gains. They’re going to probably have to come to the rescue, if we get more famines of the scale that is in the Horn of Africa. So the devastation is not worth waiting for. Let’s act now.

AMY GOODMAN: That was Wanjira Maathai, the daughter of the late Nobel Peace Prize winner, Wangari Maathai, from Kenya, who heads the Green Belt Movement. Final words, as we have this meeting in Durban, South Africa, Patrick Bond?

PATRICK BOND: Well, I think what we’ve seen with the climate justice movement coming up in opposition to a conference of polluters, a balance of forces that’s so adverse because of Washington’s sabotage, as well as everyone’s interest in trying to emit more, so, therefore, no deal. Maybe ideas like sanctions against the United States or others that won’t agree to major emissions cuts would be appropriate in coming months and years. I think that’s what the next round of negotiations will have to pick up, whether the U.S.'s extraordinary irresponsibility, even not paying the climate debt through the Green Climate Fund, and also just generally distorting and blackmailing, bribing, corrupting the process. Really, they shouldn't be a place like Durban or any other climate talks, until you have a democratic government.

AMY GOODMAN: Patrick Bond, author of Politics of Climate Justice, professor here in Durban, South Africa, and former Bolivian ambassador, Pablo Solón, we thank you very much for being with us. 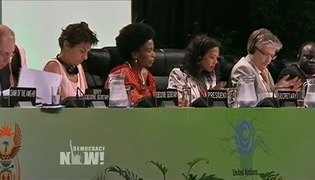