The Obama administration has resumed deporting Haitian immigrants to Haiti despite a cholera outbreak there that has killed at least 4,000 people. Last month, 34-year-old Wildrick Guerrier died of cholera-like symptoms shortly after he was deported from the United States. The U.S. government meanwhile remains opposed to the return of former President Jean-Bertrand Aristide despite authorization by the Haitian government, while pushing a runoff election vote marred by controversy, including the exclusion of Aristide’s Fanmi Lavalas party in the opening round. [includes rush transcript]

AMY GOODMAN: Bill Quigley, I also want to ask you about Haiti, a country you know well. There have been a number of major developments there in recent days. The Haitian government issued a diplomatic passport to former President Jean-Bertrand Aristide, who’s been in exile for nearly seven years. He’s in South Africa. A controversial presidential runoff election is set to take place in March. And the Obama has resumed deporting undocumented Haitians immigrants back to Haiti despite the cholera outbreak that has killed, well, we believe, over 4,000 people. Last month, a 34-year-old man named Wildrick Guerrier died of cholera-like symptoms shortly after he was deported from the U.S. Let’s begin with the deportations.

BILL QUIGLEY: It is just shameful that any government, particularly our government, would, at the time that — the exact days that we are warning people from the United States not to go to Haiti because of cholera and unrest and that, on the exact days that we’re warning citizens not to go, we are shipping plane loads of individuals there, that go into the prison system, where people are confined and exposed not just to the horrors of the prison system in Haiti, which are substantial, but to cholera, as well.

And this is coming not from some low-level official; this is coming directly from the White House. We filed a complaint with the Inter-American Commission for Human Rights to stop that. The White House itself responded to us, to the Center for Constitutional Rights and the other groups that were doing this, saying, “Look, we understand, but we think things are stabilizing, and we think people will be safe.” Just in the last couple days, the U.S. Conference of Catholic Bishops in the United States have said, “Look, you shouldn’t be sending people back there.” It’s literally — as we’ve seen, it is a death sentence for people, who have lived long lives in the United States, some of them only arrested or convicted of marijuana or something like that at some point, and we’re sending them back. It is just a horrific situation.

JUAN GONZALEZ: I’d like to ask you about the political situation in Haiti, the extraordinary situation of Hillary Clinton in the midst of trying to manage this huge international crisis in Egypt —

AMY GOODMAN: On Sunday in Egypt, and then flies to Haiti.

JUAN GONZALEZ: And then flies to Haiti to try to pressure the Haitian government to allow a runoff between the two candidates that the United States wanted to have in the runoff.

BILL QUIGLEY: Yeah, this is like a very bad high school student council election, really, is what’s happening. But the stakes are so very high. First, they exclude half the candidates who want to run. Then they come up with a crooked election that actually happens, and the government certifies the wrong people as being in charge. And then, after international pressure, now they are saying that two people can run, essentially somebody who’s a Republican and somebody who would be a Tea Partier in this country — and that decision, again, made by the United States, not made by the electoral council in Haiti. So this entire thing is a puppet show, really, by the United States government. Haiti desperately needs leadership of integrity and the like. And the Congressional Black Caucus, a lot of international human rights groups are saying, “Please, start over. Scrap this farce, this facade, this joke that’s going on there. And let everybody run and have a fair election, and then let us begin to rebuild our country.”

JUAN GONZALEZ: And the decision of the Préval government to say, “OK, you’re going to force us to do this. We’re going to grant a passport to President — former President Aristide”?

BILL QUIGLEY: Aristide and Duvalier, you know, who clearly both had incredible problems trying to get into the country before this, now they’re in there. I mean, not — Aristide is not in there yet. And the United States making a big point that Aristide shouldn’t come back, because it would just really tear the country up. This is a country that literally is facing a tsunami of human rights violations.

AMY GOODMAN: And the U.S. government is poised to send 700 Haitians back to Haiti?

BILL QUIGLEY: And week by week, another more and more and more people. They have been picking them up around the United States, putting them into prisons in Louisiana, getting them ready to send back, and sending them back — to a real death sentence.

AMY GOODMAN: Well, I want to thank you very much for joining us, Bill Quigley, legal director of the Center for Constitutional Rights. 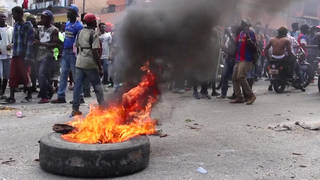