Voices from the 2011 National Conference for Media Reform

More than 2,000 journalists, activists, educators and artists from across the country gathered at the National Conference for Media Reform in Boston April 8-10 to discuss issues ranging from net neutrality and racial diversity to democracy and social justice. Democracy Now! was there.

LAURA FLANDERS: I don’t think there’s any issue more important in this country today than the concentration of media power in a few very corporate hands. If we think that we can depend on the corporate media, that is a receiver of 80 percent of this corporate money that is now unleashed into our election process, to tell us about that process fairly, we’re dreaming. We have got to build our own independent media.

ROBERTO LOVATO: I’m here because we’re at a time where the distinction between media and politics have essentially disappeared. And so, anybody that’s active, that’s pursuing social justice, needs to be involved in the media, use media, be media, and be concerned about media justice, especially at a time when the media helps people like the Democratic Party and President Obama deceive and lie and create myths that are dangerous to the point of killing people in Libya, destroying the lives of immigrants, giving the banks tens of trillions of dollars. This is all spun through a media system that’s unprecedented.

ANDREA QUIJADA: We are the Media Literacy Project. We are located in Albuquerque, New Mexico. And for the past couple of years, we’ve been working on the issue of net neutrality or internet freedom. We are an anchor organization for the Media Action Grassroots Network. And as part of that work, we have done focus groups. And what we know to be true is that people in New Mexico want the internet, and the primary barrier to them — preventing them from having it is cost. And people want it because they want access to a 21st century education, they want access to jobs, and they want access to health information.

ADAM HOLOFCENER: I mean, net neutrality is important because, just from a creator’s standpoint, everybody kind of needs a blank canvas, so to speak, in which to create. And that’s important whether you’re creating a piece of art or, you know, creating some type of innovative piece of software on the net. And, you know, we’re all for as little gatekeepers as possible, and if you start monetizing the internet in ways that it hadn’t been ever before, you know, we just will sort of see the death of the best communicative tool that we’ve had since the printing press.

KATIE INGERSOLL: I’m from the Prometheus Radio Project, and we’re a group that works with community radio stations, and we advocate for communities to have their own radio stations across the country. We’re here because we’re trying to spread the word about an opportunity to start new community radio stations that’s going to be coming up in the next couple of years. So, we just passed a piece of legislation called the Local Community Radio Act, and it’s going to allow people to start their own stations all around the nation.

KAI WRIGHT: You know, people of color are struggling to, one, get their voices out into the media, so that means about producing media. And sites like ColorLines, we’re great. We’re thrilled to be doing the work we’re doing. But there are, you know, hundreds of thousands of people out there trying to get their stories told. And that’s all about access to media, which most of them don’t have.

ARIANA PROEHL: I actually just left one of the panels on diversity in the news, and I brought up a question that’s kind of fresh in my mind in terms of highlighting the fact that we’re having these conversations of diversity within — within a space that I feel like itself, within this conference, also needs to be diversified. We aren’t seeing as many diverse faces, in age and in race and in other ways, being represented here, at the same time that we’re trying to challenge that on a larger scale.

JOSEPH OROZCO: I come here because I see that this media conference is something that talks about more progressive issues. It talks about what is happening and what needs to happen. There are 33 Native-owned radio stations, and in the next two years there will be another 33 more. So, yes, we are growing. How many more do we need? How many Native communities are there? So that we are late in the game, and we’re far underrepresented. 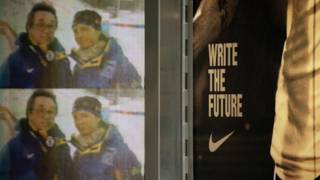