Greek Parliament Approves $40B Bailout; Some Economists Predict Vote Will Worsen the Recession

The Greek parliament was set to approve a $40 billion package of spending cuts, tax increases and privatizations as a condition for a massive bailout to avert the eurozone’s first default. Without a new plan in place, the European Union and International Monetary Fund said they would withhold 12 billion euros of loans, which Greece needs to repay debts due in mid-July. Meanwhile, French Finance Minister Christine Lagarde has been named the new chief of the International Monetary Fund. She received backing from the United States and Europe and key emerging market nations, including China, India and Brazil. The first woman to hold the position, she begins her five-year term on July 5. In her first public comments following her appointment, Lagarde urged Greek politicians to unite to avoid a debt default. We are joined by Mark Weisbrot, an economist and the co-director of the Center for Economic and Policy Research. “There’s going to be a default right up the road, so they could default now. And they could refuse to accept these conditions,” says Weisbrot. “They might be better off for that, especially if the result of what’s going to play out is years of recession and high unemployment.” [includes rush transcript]

StoryApr 28, 2016“We Were Elected to Say No to the Creditors”: Varoufakis on Resigning as Greek Finance Minister

AMY GOODMAN: As we’ve reported, police have been firing tear gas in running battles with youth in Athens, where a 48-hour general strike is underway. Union leaders called the strike to protest deep budget cuts demanded by international lenders as the price for more financial aid. The Greek parliament is right now deciding on a package of spending cuts, tax increases, privatizations, agreed to as part of a massive bailout aimed at averting the eurozone’s first default. Thousands of protesters gathering outside parliament in the capital, where public transport is ground to a halt. Without a new plan in place, the European Union and International Monetary Fund say they’ll withhold 12 billion euros of loans, which Greece needs to repay debts due in mid-July.

Meanwhile, the French finance minister, Christine Lagarde, has been named the new chief of the International Monetary Fund. She received backing from the United States and Europe and key emerging market nations, including China, India and Brazil. She begins her five-year term on July 5th. Lagarde is the first woman to head the IMF. In the first public comments following her appointment, she urged Greek politicians to unite to avoid a debt default.

CHRISTINE LAGARDE: [translated] I have a message to get through concerning Greece. It’s an appeal to the Greek political opposition to join in a national agreement with the party that is currently in power. It’s about the destiny of a country, of its security. And I think one has to put big and small political differences aside in the service of a country to get over these small matters.

AMY GOODMAN: For more on the Greek crisis and the appointment of Christine Lagarde as the IMF chief, we go to Washington, D.C., to talk to Mark Weisbrot, an economist and co-director of the Center for Economic and Policy Research. He’s been writing on the situation in Greece and IMF policies for The Guardian and in other publications.

Mark, talk about what we’re seeing right now. It was expected the vote would have taken place, but with the massive protests in the streets shutting down Athens, it has not yet happened, though the latest news is that one of the opposition politicians, Elsa Papadimitriou, has said she intends to vote with the government, increasing the chances of victory for the government’s push for the austerity plan.

MARK WEISBROT: Well, the vote may pass, but it’s not going to be the end of this struggle at all, because, as you can see, the people in the streets are really the constraint. You know, the creditors are trying to squeeze as much as they can out of Greece, and they’re making the economy worse. I mean, there’s hardly even any disagreement among economists about that, that this package, if it passes, will make things worse. They’ve already laid off 10 percent of the government workforce, and now this package will call for another 20 percent of the labor force, the federal labor force, to be laid off, and another 12 percent of GDP over the next three years in budget cuts, which would be like, you know, $1.7 trillion in the United States, budget cuts and tax increases. So, this is going to worsen the recession, unless some totally unforeseen events were to happen. And so, there’s going to be a default. That’s the opinion of the markets and most economists. And the question is, you know, what’s it going to be like? And when are they going to stop punishing Greece and allow the economy to grow and employment to return? Those are the big questions.

AMY GOODMAN: What if the parliament just voted no today? I mean, certainly, the mainstream media in the United States, it is an absolute given: they have to vote yes. CNN, through the morning, the news anchors are saying, “They must do this.”

MARK WEISBROT: Yes, I saw that show. And it is amazing how they report as though there’s no choice. There’s always a choice. I mean, there’s going to be a default, you know, right up the road, so they could default now. And they could refuse to accept these conditions, and they might be better off for that, especially if the result of what’s going to play out is years of recession and high unemployment. You know, Argentina had this choice after three-and-a-half years in the late '90s of following the IMF recipes and the economy worsening, and at the end of 2001, they did default on their debt, and they broke the link with the dollar, and—of their currency with the dollar, and they did quite well. The economy shrank sharply for just one quarter, and then it grew 63 percent over the next six years, and they pulled 11 or 12 million people out of poverty. So, that was a different scenario, and that's also an alternative for Greece.

AMY GOODMAN: Can you talk also about—and there, of course, is a connection between the appointment of Christine Lagarde as the IMF chief, replacing Dominique Strauss-Kahn, who’s facing sexual assault charges here in New York. She is the French finance minister. Talk about what she represents and what this means for Greece, Europe and the rest of the world.

MARK WEISBROT: Well, you can see she’s already saying, you know, you have to accept this. You don’t see anything coming from her that would provide any light at the end of the tunnel for Greece or Ireland or Portugal or Spain. All of these countries are being subject to these—what economists call “pro-cyclical” policies that make it difficult or impossible for their economies to recover. And I think she’s going to continue that. I mean, in fairness to her, you could say, well, she doesn’t really run—she doesn’t make policy for the IMF, because it is run by an executive board and a board of governors, and that’s the G7 countries, the United States and Europe. And that’s something I think, you know, Americans should know, too, here, because everybody is acting as though the U.S. is just a bystander here, but in fact our government is heavily involved, because they’re the major voice within the IMF, and the IMF, as you know, is right on the front lines here in Greece and these other countries.

AMY GOODMAN: And what about the international banks, like Goldman Sachs? How did Greece get in this situation?

MARK WEISBROT: Well, they all contributed to it, of course, as they did in the whole crisis. And all these countries got into this situation because of the financial crisis and the recession of 2008 and 2009. None of them would be in this situation if it weren’t for this, and Greece’s crisis has been made worse by the policies that they’ve adopted. And, of course, these policies are being adopted because this is what the creditors want—you know, the banks and of course their allies in the European Central Bank and the IMF and the European Commission.

AMY GOODMAN: And finally, what the debt means in the United States and what the deficit is that we are dealing with here, can you fit this into this global picture and what you think needs to be done, Mark Weisbrot?

MARK WEISBROT: Well, it’s kind of the opposite of what you see in a lot of these editorials that say the United States is like Greece, and we’re living beyond our means, and we’ve got to cut back, too. The real lesson from what you’re seeing in Europe and in Greece and Portugal, which just signed an agreement that commits them to two years of recession, you know, is that if you do these policies, which some people here want to do, especially the House Republican leadership, if you actually try to cut spending and raise taxes during a recession, you are going to get much higher unemployment and a much worse economy. That’s the real lesson that you can learn, that people should learn from what’s happening in Europe.

AMY GOODMAN: Mark Weisbrot, I want to thank you for being with us, economist, co-director of the Center for Economic and Policy Research in Washington, D.C. 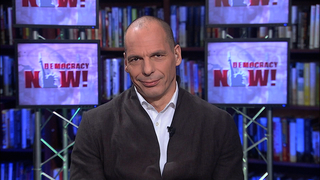 “We Were Elected to Say No to the Creditors”: Varoufakis on Resigning as Greek Finance Minister