A high-level international panel has concluded the so-called “war on drugs” has failed and that governments should consider legalizing substances, including marijuana. The Global Commission on Drug Policy is comprised of 19 members, including several former heads of state. The Office of National Drug Control Policy at the White House has refuted the findings of the commission’s report. We speak to Dr. Gabor Maté, a Canadian physician and bestselling author of four books, including In the Realm of Hungry Ghosts: Close Encounters with Addiction. “On any level you care to name, the war on drugs is a failure,” Dr. Maté says. [includes rush transcript]

AMY GOODMAN: Hundreds of billions of dollars and how many lives lost? Yes, the war on drugs. That’s the conclusion of a high-level international panel, that the war on drugs is a failure. A new report from the Global Commission on Drug Policy urges fundamental reforms in drug control policies around the world, including legalization of certain drugs such as marijuana.

The commission is comprised of 19 members, including several former heads of state and the current prime minister of Greece. Former Colombian President César Gaviria, also a member of the commission, urged the United States to begin debate on legalization.

CÉSAR GAVIRIA: We want the U.S. society to make a debate on these matters. That has not been done because political leaders are a little fearful of the association between crime and narcotrafficking, and it’s very difficult to distinguish from consumers to users. But this society needs a debate. This society is spending $40 billion a year in fighting drugs. That is a lot of money. Has more than 500,000 people in jail. But they are spending that money in a way that is not effective. The consumption has not been reduced.

AMY GOODMAN: That was former Colombian President César Gaviria. The Office of National Drug Control Policy at the White House refuted the findings of the commission’s report. Rafael Lemaitre, communications director of the White House drug policy office, said, quote, “Drug use in America is half of what it was 30 years ago, cocaine production in Colombia has dropped by almost two-thirds, and we’re successfully diverting thousands of nonviolent offenders into treatment instead of jail by supporting alternatives to incarceration.”

To discuss the findings of the report, we’re joined by Dr. Gabor Maté, physician, bestselling author of a number of books, including his latest, In the Realm of Hungry Ghosts: Close Encounters with Addiction. Dr. Gabor Maté works at a drug addiction clinic in Vancouver, the only legal injection site in North America.

AMY GOODMAN: This report that’s just come out, the significance of what the international community is saying and what the United States is saying?

DR. GABOR MATÉ: The significance is that the recommendations don’t come from the usual advocacy groups or from physicians like myself. It comes from sterling establishment figures, including in the United States, people such as George Shultz, former secretary of state, and Paul Volcker, former head of the — former chairman of the Federal Reserve.

And the conclusion that they’ve come to is that the U.S.-led war on drugs is an utter failure in its own terms. And they very carefully and rigorously lay out the costs of the war economically and also in terms of human suffering, and they lay out a set of principles and policies that would lead to very different results.

AMY GOODMAN: Talk about what they are recommending and what you think is actually the solution.

DR. GABOR MATÉ: Well, first of all, they point out the cost, which is economically huge: apparently, federally, $25 billion, and double that by the states in this country, apparently. And that’s only the direct cost of fighting the war. That doesn’t include the healthcare costs that are incurred as a result of it. It doesn’t include the crime that is caused by the criminalization of drugs. So they point out those costs. And they say that despite the jailing of tens of millions of people over the decades, nothing has been done to reduce drug use or the power of the criminal organizations. As a matter of fact, they point out, statistically, between 1998 and 2008, heroin use around the world has gone up by a factor of nearly 30 percent, cocaine use by 25 percent, and marijuana use by 8.5 percent, so that on any level you care to name, the thing is a failure, the war on drugs is a failure.

And therefore, what they recommend is an evidence-based approach, through the social, legal and medical attitudes towards drug use and drug treatment and drug prevention. And they call for what they call is the ending of the criminalization, marginalization and stigmatization of drug users, and they point out, as I have in previous interviews, that most heavy drug users actually are that way because of early childhood trauma.

AMY GOODMAN: So, what do you think would be the most effective policies now? It’s quite amazing, in this time of a deficit, when supposedly every program is being looked at, in fact the Obama administration has asked for money for the war on drugs to be increased. In the 2012 budget, the White House requested $1.7 billion for drug prevention programs, 7.9 percent increase from the previous year, would bring the national drug budget to something like $26.2 billion.

DR. GABOR MATÉ: The Obama administration, in this and in other areas, as well, their original promises and in the hints of a different direction have not materialized. And unfortunately, they’ve gone on board with the previously long-instituted and completely failed policies of previous administrations.

Everything that I would call for is actually called for in this report. They call for public health measures to prevent drug abuse, and more — better attitudes towards looking after children and young people, rather than simply useless programs that tell people not to use drugs, the “just say no” kind of Nancy Reagan-type programs, which have been shown to fail over and over again. So they’re calling for real prevention.

Then they’re calling for harm reduction. They point out that financially, $1 spent on needle — providing clean needles saves $4 in healthcare costs and $27 in general costs to society. They point out that in Australia, where they have instituted such programs at the cost of about $120 million, the savings have been in the billions of dollars when it comes to overall costs. They point out that in countries which have instituted harm reduction measures, the rate of HIV infection amongst drug users is about less than five percent, as opposed to the countries which have totally resisted those measures, where it’s up to over 50 percent in some cases. So, you know, again, what they’ve done is they’ve taken the evidence and they’ve made recommendations based on science and on findings rather than on prejudice.

AMY GOODMAN: In 2004, well before Obama was president, he said marijuana should be decriminalized. He was also critical of the war on drugs.

AMY GOODMAN: President Obama speaking in 2004, well before he was president, talking about decriminalizing marijuana and the failure of the war on drugs. He has a different line now.

DR. GABOR MATÉ: It’s not the only issue on which Obama has a different line now than he may have had before he was elected. But it’s a very tragic one.

AMY GOODMAN: The difference between decriminalization and legalization, Dr. Maté?

DR. GABOR MATÉ: If you legalize something, you make it like cigarettes and alcohol, which you can buy in corner stores. If you decriminalize it, you don’t necessarily permit it to be sold publicly or freely, but you no longer jail people for their personal use of the drug. You might still make it illegal to traffic in it, although this recommendations — these recommendations by this commission actually call for the easier attitude towards people who — small criminals who sell only to support their own habits, for example, and also for growers around the world that are just trying to do it to support their families. So, they’re not calling for decriminalizing, except for cannabis, but they’re certainly calling for — sorry, they’re not calling for legalization, but they’re calling for decriminalizing the drugs, so that, for example, in Portugal, it’s no longer a criminal offense to have drugs for personal use.

AMY GOODMAN: And does drug use go up in these cases?

DR. GABOR MATÉ: The evidence is that it doesn’t make any significant difference. Portugal has gone up slightly over the last 10 years, but no more so than in the rest of Europe where it’s completely illegal. And they found the same thing in Australia. And when they compared Amsterdam to San Francisco, being a second place where the laws are draconian, and Amsterdam, where they’re — or Holland, where they’re — it’s not illegal to possess marijuana, there’s no difference, in effect, so that there’s absolutely no evidence whatsoever that decriminalization, or even legalization, leads to more use.

AMY GOODMAN: We’re going to leave it there right now, but we’ll continue the conversation. You can go to democracynow.org to our web exclusive and to our previous conversations with Dr. Gabor Maté, Vancouver-based physician and bestselling author. Among his books, In the Realm of Hungry Ghosts: Close Encounters with Addiction. 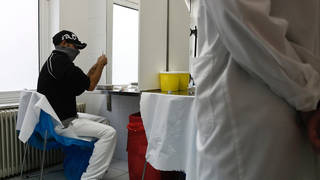