Dr. Paul Farmer addresses a new report in The Nation magazine that alleges shelters funded by the Clinton Foundation turned out to be a series of trailers beset with problems including mold, shoddy construction and, in one case, worrying levels of formaldehyde. The trailers were built by the same company, Clayton Homes, that is currently being sued in U.S. for providing formaldehyde-laced trailers for residents displaced after Hurricane Katrina. Democracy Now! recently spoke to the authors of the investigation, Isabel Macdonald and Isabeau Doucet, who called on the Clinton Foundation to respond to their findings. [includes rush transcript]

AMY GOODMAN: But taking it through to today, if these policies are changing, especially around aid after the earthquake, just a few days ago we had on Isabel Macdonald and Isabeau Doucet, who are two women who were writing for The Nation magazine about what’s happening in Haiti today. And I wanted to ask you about their investigative report that takes a critical look at the Clinton Foundation’s first recovery commission project in post-earthquake Haiti, the construction of shelters in the city of Léogâne.

The report reveals the shelters turned out to be a series of trailers beset with problems including mold, shoddy construction—in one case, worrying levels of formaldehyde. The trailers are also built by the same company, Clayton Homes, that’s currently being sued in the U.S. for providing formaldehyde-laced trailers for residents displaced after Hurricane Katrina. This is Isabel Macdonald, one of the authors of the report, on Democracy Now!

ISABEL MACDONALD: We’ve been requesting documentation of any bidding process from the Clinton Foundation, and we have not gotten documentation. We know that they were built by Clayton Homes, which is currently being sued in the United States for exposing Hurricane Katrina survivors to injurious levels of formaldehyde, which the plaintiffs in this FEMA formaldehyde lawsuit claim came as a direct result of them residing in trailers that Clayton Homes had sold to FEMA. The Clinton Foundation has not answered our questions about any due diligence that was done. We know that trailers are considered a liability in the United States in the case of a hurricane. FEMA tells Americans to evacuate trailers. And so, the real question is, how did Bill Clinton think that this would be acceptable in Haiti to provide these trailers as hurricane shelters, to buy them from a company facing this kind of lawsuit over formaldehyde? And what does it say about the reconstruction efforts in Haiti, if the very first project approved by the commission that’s supposed to ensure accountability and transparency in Haiti’s rebuilding passes this kind of project? And Bill Clinton himself has his hands all over it, and he is the co-chair of this commission that is supposed to ensure that Haiti is “built back better.”

DR. PAUL FARMER: Well, I would make a couple of points. First of all, I don’t know that that’s the first project approved by the commission. And—

AMY GOODMAN: One of the first, they said.

DR. PAUL FARMER: Or even that. I mean, I’ll tell you about my own experience first in looking at shelters in Léogâne. And I haven’t seen these ones. But when I went there, actually with President Clinton a couple times, I was just stunned at how flimsy the temporary shelters were. I wrote about this, not in a—I hope—in mean way, in the book that you’ve read, just to say, “This is it? This is what the shelter experts can give us?” They were—first of all, I, speaking the language, hear something very different from what President Clinton hears, which is mediated through translator. Once in a while I end up being his translator, which I find kind of stressful. But usually, if I’m lucky, I can just hang back and listen to what people are saying and then distill that later on and share it. So, I went on this trip and was looking at the shelters, and there was a woman who was kind of on display as here’s someone who has benefited from our shelter. It had nothing to do the Clinton Foundation or—we were visiting a formally approved—and when I say “formally approved,” I mean by so-called shelter experts. And what it was, was a bunch of two-by-fours with white plastic sheeting around them and a tin roof. And I just had to say, “This is it? This is what the experts are giving us?”

Now, one other thing is, about the commission, just to go back to the journalists’ point, this commission was stood up against—really against the prevailing undercurrent of the way things get done in Haiti. It was an attempt—and I’m not formally part of the commission, so I’m saying it as an outsider who’s a fan—the idea was to have some way of coordinating all of these crazy actors, that are people of good will, no doubt, but they’re not coordinated in Haiti. Again, in the book, I compare this—this is quite a contrast to Rwanda, where it’s mandated. So I think the story, which I’m going to look into, is—is really—I’m glad that the Clinton Foundation would try and speed up this process in Léogâne. I think that the ones I saw, the temporary shelters I saw, were certainly not robust, by any description.

AMY GOODMAN: But these, they’re talking about formaldehyde-tainted. The company, Clayton Homes, which, by the way, is owned by Berkshire Hathaway, is—they are the ones we know well from Hurricane Katrina, where all these lawsuits are happening around those. And now they’re in Haiti. And I guess it’s that question that you raise very well in Haiti After the Earthquake, through Haiti’s history, of who is in control, who is profiting, and who gets to make the decisions. And we’ll leave it with that question. We only have about 45 seconds for you to answer.

DR. PAUL FARMER: Well, I think that it’s important to understand that reconstruction is going to require a lot more investment in the Haitian public sector, certainly around education and healthcare, but also in focusing on job creation for Haitians, which would, I hope, help steer resources into Haitian firms. And I know that’s something actually that President Clinton very much would like to see, himself.

AMY GOODMAN: How does that happen when the people so often feel excluded?

AMY GOODMAN: Dr. Paul Farmer, thanks so much for being with us. His new book is called Haiti After the Earthquake. 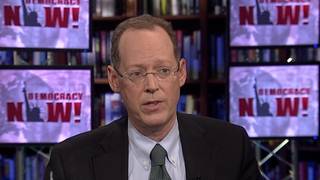