As negotiations continue on a debt deal, we ask longtime consumer advocate Ralph Nader for his solution. Nader says, “Now we have the situation with the deficit and the debt and spending and jobs. And it’s not that difficult to get out of it. The first thing you do is you get rid of corporate welfare. That’s hundreds of billions of dollars a year. The second is you tax corporations so that they don’t get away with no taxation. The Citizens for Tax Justice put out a report recently. They had 12 major corporations, like Honeywell, Verizon, General Electric, and in three years, they made $167 billion in profit, paid zero tax, and got $2.5 billion back from the Treasury.” [includes rush transcript]

AMY GOODMAN: Ralph, can you talk more about the economy right now? Talk about who’s protected, who isn’t, and that really goes right into this deficit debate that is going on in Washington right now, the debt lock. What is discussed? What isn’t? Who’s protected in this? What budgets are not questioned, and what’s being slashed, and where President Obama stands in all of this?

RALPH NADER: Well, let’s segue from Elizabeth Warren, because the real issue in Elizabeth Warren is contract peonage. The American people, every day, engage in transactions, with these contract—fine-print contracts wrapped around their necks, strangling them. They have really destroyed the concept of freedom of contract in this country. Listen up, so called Tea Partiers, and get on board here. And this is what led to the mortgage debacle. There’s no time to explain it now, but the point is that corporations have taken over these contracts. They unilaterally change them. They block people from going to the court. They’re constantly penalizing—termination fees, this penalty, that penalty. It’s a total contract peonage. Contract serfs, that’s what they’ve turned the American people into. And they don’t even compete over these contracts. For example, if you don’t like Allstate, State Farm is the same, or if you don’t like Ford, GM contracts are the same. So people are trapped. And that is what is increasing the greed and the risk, in terms of deploying the insecurity that brought down the economy.

Now we have the situation with the deficit and the debt and spending and jobs. And it’s not that difficult to get out of it. The first thing you do is you get rid of corporate welfare. That’s hundreds of billions of dollars a year. The second is you tax corporations so that they don’t get away with no taxation. The Citizens for Tax Justice put out a report recently. They had 12 major corporations, like Honeywell, Verizon, General Electric, and in three years, Amy, they made $167 billion—with a “B” —dollars in profit, paid zero tax, and got two-and-a-half billion dollars back from the Treasury. So you can see, if you return the tax rates and the effective tax payments back to the prosperous 1960 level, there would be hundreds of billions of dollars. You get out of Afghanistan, Pakistan, stop being engaged in these criminal wars of aggression, and get out of Iraq, you’ll save another $150 billion. So, there are a lot of ways. Cutting the huge amount of redundancy and waste and out-of-date weapons programs in the Pentagon, again, another one. Bringing back the soldiers from Europe and East Asia, 65 years after World War II. What are they doing? Defending prosperous countries, like England and Germany and Italy and Japan, against what? Inner Mongolia or Moldova?

So, we know what the answers are. But we don’t have the power in Washington, because the liberal, progressive base appears to have no breaking point with the Democrats here in Washington. And that’s true for—that’s also true for the liberal intelligentsia. They have no—when you ask them, “Do you have any breaking point? How bad do these Democrats have to be, even though the Republicans are worse, for you to begin conditioning your vote, demanding more vigorous debates in the presidential primary, demanding more candidates, demanding rights for third parties, as the Center for Competitive Democracy has been pushing for? They have no breaking point. And if you have no breaking point, you have no moral compass, and people like Barack Obama know that you can be had. And indeed, they’ve been had.

AMY GOODMAN: Ralph Nader, the debt ceiling—how significant this is, and what happens if it is not lifted?

RALPH NADER: It will be lifted, because Wall Street has written a letter, with many corporate executives signing on and the Business Roundtable, and they’re basically telling the Republicans, “On this one, you’ve got to grow up.” These Republican delinquents are rattling a catastrophic cage of international confidence in the dollar and U.S. credit. And, of course, Moody’s and Standard & Poor are rattling, it might downgrade the U.S. debt. Imagine, these crooked rating companies, who helped fake the valuations on Wall Street and bring down the economy, are now evaluating the U.S. government’s credit. But be that as it may, it’s almost 100 percent certain that very soon, whether in two, three, four days, they will agree, both Republican and Democrats, to raise the debt limit, probably without any conditions. I think the McConnell plan, however unconstitutional it is, shifting the decision entirely to the executive branch, when last I heard that that was a constitutional authority of the Congress, I think that’s probably going to be the fallback position. 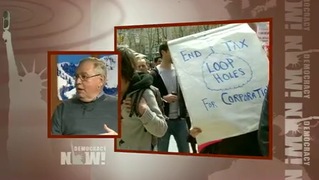