The National Labor Relations Board has recommended the cancellation of the results of an election last year between two unions to represent 43,000 employees in California’s largest hospital chain, Kaiser Permanente. The giant Service Employees International Union, or SEIU, beat out the much smaller breakaway National Union of Health Workers, or NUHW, in a bitterly contested race. But a National Labor Relations Board judge has now ruled SEIU was guilty of misconduct and collusion with Kaiser Permanente to influence the vote’s outcome. Democracy Now! co-host and New York Daily News columnist Juan Gonzalez comments on what he calls a “huge decision” for the labor movement. [includes rush transcript]

StoryFeb 19, 2020Bloomberg Gains in Democratic Primaries, But Has History of Hostility to Unions Key to Voter Turnout

AMY GOODMAN: Juan, before we go to our first piece, you had a very interesting column in the New York Daily News today.

JUAN GONZALEZ: Yes, I dealt with the issue that we talked about in headlines yesterday, which was the decision this week by an administrative law judge at the—for the National Labor Relations Board that canceled the results of a huge election, union election, in California that occurred last year. It was the largest unionization representation election in the United States in the last—in more than 50 years. And it involved the Service Employees International Union, which was attempting to maintain its representation of 43,000 workers at the Kaiser Permanente hospital chain across the country. And the SEIU was challenged by a breakaway group, the National—NUHW, the National Union of Healthcare Workers, which had broken away from SEIU a couple of years before. The NUHW challenged the results of the election, claiming that the SEIU and Kaiser Permanente had effectively colluded to prevent the workers from exercising their right.

And surprisingly, the administrative law judge agreed, in part, with the National Union of Health Workers, decided that SEIU had been involved in unfair labor practices, had been attempting to frighten the workers in—at Kaiser Permanente, saying that the cuts in wages and benefits that Kaiser Permanente was warning for those people who joined NUHW was going to occur if they didn’t vote for SEIU, and has now ordered a new election. So, this is a huge defeat for SEIU. And for those who believe in rank-and-file democracy and more involvement by workers in their union decision making, this is a huge step forward. So we’ll see what happens in the future. 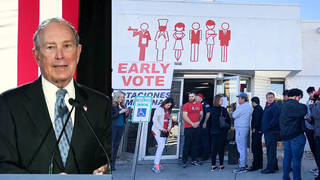 Bloomberg Gains in Democratic Primaries, But Has History of Hostility to Unions Key to Voter Turnout