Hundreds of Same-Sex Couples Marry in New York, from Niagara Falls to Manhattan

Hundreds of gay couples got married across New York state Sunday after it became the sixth and most populous state in the United States to recognize same-sex marriages. New York joins Connecticut, Iowa, Massachusetts, New Hampshire, Vermont and the District of Columbia in allowing same-sex unions. But gay marriage is still specifically banned in 39 states. On Sunday, Kitty Lambert, 54, and Cheryle Rudd, 53, were married with Niagara Falls in the backdrop, a traditional honeymoon capital. Both grandmothers, the women celebrated their marriage surrounded by family and friends. Democracy Now!’s Elizabeth Press was there to cover what they described as the first same-sex marriage in New York, as their marriage ceremony began one second after midnight. “We can educate people into understanding that we’re your neighbors, we’re your co-workers, we’re your friends, we’re your family members; and all we’re asking for is the right to protect ourselves, the right to have the same protections under law that our neighbors do, that our co-workers do, that our friends and family do. This is about equal access to equal protection under the law,” Lambert said. [includes rush transcript]

AMY GOODMAN: Hundreds of same-sex couples married across New York on Sunday after it became the sixth and most populous state in the country to recognize same-sex unions as legal. Phyllis Siegel and Connie Kopelov were the first couple to marry in New York City. Phyllis is 77 years old, Connie 85. They’ve been together for 23 years.

PHYLLIS SIEGEL: It was just so amazing. It’s the only way I can describe it. I lost my breath and a few tears. And it’s indescribable.

The weddings across New York also prompted calls from activists and officials to repeal a federal law that defines marriage as between a man and a woman. The Obama administration is now backing a new congressional measure that would repeal the Defense of Marriage Act, or DOMA, which denies federal recognition of gay marriage. DOMA was signed into law in 1996 by former President Bill Clinton and prohibits same-sex couples from receiving marriage-based federal benefits such as Social Security survivor benefits, health benefits and the right to file taxes jointly. The new Respect for Marriage Act was introduced following the White House’s surprise announcement it would stop defending DOMA in court earlier this year.

Democracy Now!'s Elizabeth Press was in Buffalo this weekend, where she covered the first same-sex marriage in the honeymoon capital of the country, Niagara Falls. Kitty Lambert, age 54, and Cheryle Rudd, 53, both grandmothers from Buffalo, were married just after midnight Saturday at Niagara Falls State Park's Luna Island. Elizabeth Press filed this report.

CITY CLERK GERALD CHWALINSKI: We are gathered together here in the presence of this company to join this couple in the bonds of matrimony.

ELIZABETH PRESS: On Sunday, hundreds of gay and lesbian couples were legally married for the first time in New York state.

DANIEL RODGERS: I’m Daniel Rodgers, and we’ve been together for a long, long time, 17 years.

SCOTT KLAURENS: Congratulations to all the couples that are going to be able to finally get married and share their love and celebrate it in public, like we are. We didn’t plan on it, but we actually ended up being the first marriage in City Hall here at Buffalo, and we’re excited about it.

JEAN WALKER: My name is Jean Walker, and I came in from Ohio to be able to marry Michelle and have our rights observed.

EDWARD WOLFE: We just got our marriage licenses, so tomorrow we are going to be husband and husband. We’ve already been through thick and thin, and we have so much more to go through, a whole lifetime together.

ELIZABETH PRESS: At 12:01 Sunday morning, Kitty Lambert and Cheryle Rudd were the very first same-sex couple to take their vows in New York state. I caught up with Kitty before the ceremony.

KITTY LAMBERT: I am in heaven. I am so in love with the most remarkable woman. She is a great mom. She is my best friend and my best playmate. And in just a few hours, I will exchange vows with her, and for the rest of eternity we will love each other and care for each other and be dedicated to each other, and it will all be legal.

REV. DR. BARBARA HULSING: Tonight, we gather for a groundbreaking and historic event. We are here to witness the Union of Kitty Lambert and Cheryle Rudd, the first gay marriage in the state of New York. You may wonder why there are two ceremonies scheduled, a religious one and later a civil one. As Kitty said to me earlier today, “Render to Caesar the things that are Caesar’s, and to God the things that are God’s.” The civil ceremony is necessary in order to obtain the rights that have always been extended to heterosexual couples and which LGBT couples justly deserve.

CHAPLAIN CAROL SPESER: I’m Chaplain Carol Speser. Is this wonderful or what? Oh, my god. You know, I’m 63. Did I ever think this would happen? No. This is so glorious.

KITTY LAMBERT: This wedding kind of symbolizes that this struggle can be won, people can be educated on this issue, that we can blow away all the nonsense, all the myths, all the foolish stuff that’s said about us, and we can educate people into understanding that we’re your neighbors, we’re your co-workers, we’re your friends, we’re your family members; and all we’re asking for is the right to protect ourselves, the right to have the same protections under law that our neighbors do, that our co-workers do, that our friends and family do. This is about equal access to equal protection under the law.

SAM HOYT: Kitty Lambert was a champion, a rock-solid superstar, when it came to promoting marriage equality here in West New York. And to be a part of that is a great honor.

GREGORY RABB: Gregory Rabb, currently the president of the Jamestown, New York, City Council, and the only openly gay elected official in the eight counties of western New York. I’m also good friends of Kitty and Cheryle and have been working with them very closely on marriage equality all through western New York. So tonight is important personally, because of Kitty and Cheryle, but even more importantly, it’s important because, as a gay person, and lesbian people and all the rest of us, how we identify here, you know, for the first time, at midnight, we’re going to be much closer to being full citizens in the state of New York.

ELIZABETH PRESS: Nearing midnight, the party roved to its third and final location, where the traditional honeymoon capital, Niagara Falls, posed as the backdrop for their legal ceremony.

MAYOR PAUL DYSTER: My name is Paul Dyster. I’m mayor of the city of Niagara Falls, and I’m going to be performing the marriage ceremony tonight. I want to say how honored I am, not just that you chose me to officiate, but that you chose Niagara Falls as the backdrop for this historic event. By the power vested in me by the laws of the state of New York—wait for it—

ELIZABETH PRESS: Cheryle, how do you feel?

CHERYLE RUDD: I feel great. I mean, there is no difference, other than satisfaction and comfort and knowing that I have the same rights as everyone else.

GRANDSON: I was very happy, because my grammy and grandma were married.

GREGORY RABB: The battle is continuous. You don’t get your rights by sitting still. But tonight we’re taking the night off, relaxing, enjoying ourselves, celebrating us. And then, ah, maybe tomorrow, we’ll get back to work.

ELIZABETH PRESS: And people did.

ELIZABETH PRESS: For Democracy Now!, this is Elizabeth Press, reporting from Niagara Falls.

AMY GOODMAN: This is Democracy Now!, democracynow.org, The War and Peace Report. When we come back, well, she described herself as a “domestic goddess”—the actress, the comedian, Roseanne Barr. Stay with us. 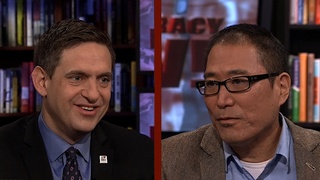