This week, thousands of immigrants and their allies protested outside the White House, denouncing the Obama administration for deporting more than one million immigrants in the last two years. Rep. Luis Gutierrez, Democrat from Illinois, was among the dozens of protesters arrested on Tuesday for peacefully occupying the White House sidewalk. He participated in the act of nonviolent civil disobedience one day after he received a letter from President Obama rejecting his proposal to suspend deportations of undocumented college students with clean criminal records. “I thought that for one moment, I should have my hands clasped together with handcuffs and taken away a short period of time, to bring attention and to say, I denounce [Obama’s immigration] policies as immoral,” Gutierrez says. “Right now the Republicans are leading, in their anti-immigrant, obviously xenophobic march both in the House and in the Senate. And you know what? With the same energy and vigor that they lead against us with hatred and bigotry, we want [Obama] to stand up with that same energy for us.” [includes rush transcript]

JUAN GONZALEZ: This week, thousands of immigrants and their allies protested outside the White House, denouncing the Obama administration for deporting more than one million immigrants in the last two years. Representative Luis Gutierrez, Democrat from Illinois, was among the dozens of protesters arrested on Tuesday for peacefully occupying the White House sidewalk. Representative Gutierrez participated in the act of nonviolent civil disobedience one day after he received a letter from the President rejecting his proposal to suspend deportations of undocumented college students with clean criminal records.

In his letter, Obama claimed that immigration authorities were deporting fewer immigrants who lack legal status but have not been convicted of any crime. However, immigrant rights activists say the majority of those deported under Obama’s watch have had no criminal records whatsoever. They also note that the Obama administration has ramped up deportation efforts through programs like Secure Communities, which allows immigration agents to peer into the databases of local and county jails to check the fingerprints of anyone who’s booked against federal immigration databases.

AMY GOODMAN: On Monday, President Obama addressed the National Council of La Raza, the Latino civil rights organization, defending his deportation policies, saying Republicans remain an obstacle to overhauling the immigration system. When Obama claimed he could not single-handedly use his presidential executive authority to reform deportation policies, audience members interrupted him and began chanting, “Yes, you can!”

PRESIDENT BARACK OBAMA: Now, I know some people want me to bypass Congress and change the laws on my own. Believe me, and—and believe me, right now, dealing with Congress, the idea—

PRESIDENT BARACK OBAMA: But believe me—believe me, the idea of doing things on my own is very tempting. I promise you, not just on immigration reform. But that’s not how—that’s not how our system works.

JUAN GONZALEZ: Despite Obama’s claims that his hands are tied, immigrant rights activists continue to say he has the power to use his executive authority to grant administrative relief to undocumented immigrants.

AMY GOODMAN: We’re joined right now from Washington, D.C., by Congress Member Luis Gutierrez, the Democratic Congressman from Illinois, chair of the Immigration Task Force of the Congressional Hispanic Caucus. Congress Member Gutierrez, among those arrested Tuesday while protesting outside the White House.

Welcome to Democracy Now!, Congress Member Gutierrez. Why did you get arrested exactly?

REP. LUIS GUTIERREZ: Because I think we have to bring attention to the plight, to the destructive, corrosive nature of our broken immigration system. Because I have Specialist Nunez, a wonderful young Hispanic man who served five years in the military, signed up again because he thought he had to go fight in Afghanistan. And you know what? His wife is deported to Ciudad Juárez in Mexico. Because we have so many thousands and thousands and thousands of families. Because we have four million American citizen children. You know, today, there are going to be American citizen children who are going to lose their parents. And so, I thought that for one moment, I should have my hands clasped together with handcuffs and taken away a short period of time, to bring attention and to say, I denounce these policies as immoral.

JUAN GONZALEZ: And Representative Gutierrez, your immediate reaction when you got the letter from President Obama, because I know you’ve been lobbying on this issue with him now for many months, and his final determination that he’s not going to move and use his executive authority?

REP. LUIS GUTIERREZ: Yeah. Well, you know, Juan, we’ve been kind of having a dialogue with him, right? And conversations with high-ranking members of his administration. In May, Senator Menendez, I and Charlie Gonzalez and a group of members, we sat down with the President for a little over an hour, in which we stressed that he has it. So, if you read the letter carefully, look, it’s not that he says he doesn’t have the power. It really says, “I’m not ready to use it in the manner in which you suggest I use it.” In other words, we said to him, “Look, why not just do what 22 U.S. senators, including Leahy, the chairman of the Judiciary Committee, including Dick Durbin”—he’s the senator from the state of Illinois, a very close friend and confidant of the President. Twenty-two U.S. senators wrote the President an open letter saying, “Set the DREAM kids aside. Say to a million eligible immigrants in America, you’re not going to deport them. Give them a work permit. And in the meantime, we’ll continue to work on that legislative process.”

And let me say that I think the letter is very disingenuous, because, Juan, as you look at the last paragraph, it says, “Luis, why don’t you use that moral authority, that energy, to go and get the Congress of the United States to change the laws that you feel are unfair?” Let me suggest—I want to tell your audience something. In December of 2010, a week before Christmas, I sat but three feet away in the Oval Office with the President, and he said to me, “Luis, we will not have an opportunity or the ability to pass any comprehensive immigration reform ’til after my reelection as president of the United States.” And he furthermore says, “We can’t—we won’t be able to have the numbers.” So, to say to us now, “I’m not going to use my authority, but go get the Congress to get—to act,” he already told me, he already acknowledged, seven months ago, that that was a futile process. And so, we need to continue to encourage him to have an honest, open discussion with us. In other words, what he says to us behind doors, he should say to us when he’s speaking to us publicly.

AMY GOODMAN: When Obama ran for office in 2008, he said he was going to deal with the issue of immigration in his first year. Well, that promise has remained unfulfilled. In the speech at National Council of La Raza’s annual conference Monday, Obama blamed Republicans for the stalemate on immigration reform.

PRESIDENT BARACK OBAMA: I need a dance partner here. And the floor is empty.

REP. LUIS GUTIERREZ: Look, OK, dance partner? For two years, we know, we had a 50-vote majority in the House of Representatives. We were 60. And in the end, we were 58 in the Senate. Please, tell me when he asked and called the party and the dance, so that Republicans and Democrats could dance together to bring about comprehensive immigration reform. In other words, now when there are insufficient numbers of us, he wants to call the dance. Well, you know, look, Mr. President, you wasted. You let two years go by. You showed little or no enthusiasm, energy or importance or priority to this issue, and now you have a huge problem, demonstrated at National Council of La Raza, because what is the debate? The debate in our community has really been, the President says, “Ah, it’s the Republicans, they need to just go—Congress needs to act,” and our argument has been, “We have conferred upon you extraordinary executive powers, conferred upon you. Already the Congress has given you those powers. Use them. That’s what they’re there for, so that you can use them.” And we have senators and groups and people. Look, there’s not a debate whether the president has these powers. He has them. He is reluctant. He refuses to use them.

And so, Juan asked me about the letter. I have to tell you, it really saddened me, because it was so tough, right? It was so rigid. It was like, “Yeah, I’m the chief enforcement officer of the laws of the nation, and that’s—you guys are right. That’s what I’m supposed to do. And by the way, I’m not going to do what you guys suggest I could do.” He just literally just takes it—there’s no room. Look, at National Council of La Raza three years ago, the President? The roof came off the room when he spoke three years ago, right? Because what did he say three years ago, is he said, “When babies are being torn from their mothers’ arms, when children arrive home to find their parents missing, when you have ICE raids abundant in our community with no legal recourse,” he said, “that’s wrong, and it’s time to change it.” And the place went crazy, right? I mean, the energy in the place, that energy carried to the election in November, when more than two million more Latinos voted in 2008 than 2004. He got two-thirds of that vote, carrying Nevada, carrying New Mexico, carrying Colorado and carrying Florida. I mean, people feel a sense of—that they’re in this. They heard his message. And now they feel that he has to—that he has to fulfill his promise.

REP. LUIS GUTIERREZ: Right now the Republicans are leading, in their anti-immigrant, obviously xenophobic march both in the House and in the Senate. And you know what? With the same energy and vigor that they lead against us with hatred and bigotry, we want him to stand up with that same energy for us. And if he does that, we’re going to have a community that is vibrant and that can be successful and victorious. 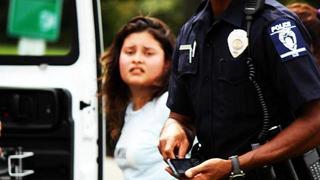