During a July 2 discussion in London moderated by Democracy Now!’s Amy Goodman, WikiLeaks founder Julian Assange discusses a new lawsuit WikiLeaks is filing against Visa and MasterCard for what he calls an “economic blockade” against his whistleblower group, preventing them from collecting credit card donations online. Mastercard, Visa and other financial giants cut off payment methods to WikiLeaks following the release of secret U.S. diplomatic cables last year. “It is an extraordinary thing that we have seen, that Visa, MasterCard [and other companies] are instruments of U.S. foreign policy,” Assange says. [includes rush transcript]

AMY GOODMAN: We return now to our conversation with WikiLeaks editor-in-chief Julian Assange and the Slovenian Philosopher Slavoj Žižek. These next highlights feature Assange. Again, 1,800 people gathered this Saturday for this unusual discussion, moderated by Democracy Now!, about the impact of WikiLeaks on world politics, the release of the Iraq and Afghanistan War Logs, and Cablegate, the largest trove of State Department documents released in history.

Sorry, what was the question? Oh, yes, MasterCard. So, when Daniel Ellsberg released the Pentagon Papers, did they suddenly change things? Actually, Nixon was reelected after Daniel Ellsberg released the Pentagon Papers. The Vietnam War didn’t stop. The information was very important in all sorts of ways, and its importance over time was very important.

So, on December 6th last year, Visa, MasterCard, PayPal, the Bank of America, Western Union all ganged up together to engage in an economic blockade against WikiLeaks, and that economic blockade has continued since that point. So, it’s over six months now we have been suffering from an extrajudicial economic blockade that has occurred without any process whatsoever. In fact, the only two formal investigations into this, one was on January 13 last year by Timothy C. Geithner, the Secretary of the Treasury, who found that there was no lawful excuse to conduct an economic blockade against WikiLeaks, and the other was by a Visa subsidiary, who was handling our European payments, Teller, who found that we were not in breach of any of Visa’s bylines or regulations. Those are the only two formal inquiries. And yet, the blockade continues. It’s an extraordinary thing, that we have seen that Visa, MasterCard, Western Union, and so on, are instruments of U.S. foreign policy, but instruments of U.S.—of not U.S., as in a state operating under laws foreign policy, but rather instruments of Washington’s patronage network policy. So there was no due process at all.

And so, over the past few months—you know, we have a number of cases on, so we have been a bit distracted. But over the last few months, we have built up the case against Visa and MasterCard, under European law. And Visa and MasterCard together own about 95 percent of the credit card payment industry in Europe, and therefore they have a sort of market dominance, and that means, under European law, they cannot engage in certain actions to unfairly remove people from the market. 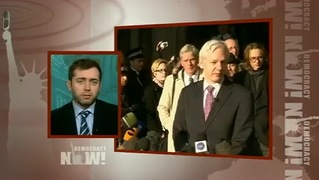