A trio of men convicted of brutally murdering three young boys in Arkansas in 1993 were released from prison Friday. Damien Echols, Jason Baldwin and Jessie Misskelley, Jr. — otherwise known as the West Memphis Three — entered a rare plea deal in which they maintained their innocence, but pleaded guilty to murder, with the state of Arkansas recognizing them as child-killers safe enough to be set free. The men were convicted of the killings after an investigation largely fueled by unsubstantiated rumors of a Satanic ritual. In 2007, new forensic tests of evidence at the crime scene turned up no genetic material belonging to any of the men. We speak to filmmaker Joe Berlinger, co-director of the documentary covering the case, “Paradise Lost: The Child Murders at Robin Hood Hills.” The film sparked an international movement to “Free the West Memphis Three.” [includes rush transcript]

AMY GOODMAN: Members of the Dixie Chicks were there for this moment on Friday when three men, imprisoned for the 1993 satanic slayings of three eight-year-old boys in West Memphis, Arkansas, were freed, after nearly two decades of proclaiming their innocence. Damien Echols, Jason Baldwin and Jessie Misskelley, Jr., accepted a bargain, known as an “Alford plea,” in which they could continue to claim their innocence but plead guilty in exchange for an 18-year sentence and credit for time served. Prosecutors called it a closed case after the hastily called court hearing in Jonesboro, Arkansas. Two of the men had been sentenced to life. Echols was on death row. They were expected to be released Friday after the ruling in the Craighead County District Court in Jonesboro.

Pressure had mounted to free the three after they were convicted in 1994 of the murders of eight-year-old Cub Scouts Steven Branch, Christopher Byers and James Michael Moore. Police at the time called the murders “satanic” because the children’s naked bodies had been bound and mutilated. The West Memphis Three, teenagers at the time of the murders, maintained their innocence in the deaths of the boys in the Arkansas-Tennessee border town. Recent DNA tests did not link the men to the scene and showed the presence of others who have never been identified. Their cause was taken up by activist groups across the country, championed by celebrities like Pearl Jam’s Eddie Vedder and Dixie Chicks singer Natalie Maines, both of whom were in Jonesboro for the hearings.

Echols thanked Baldwin and Misskelley for agreeing to take the guilty plea so that he could get off death row. Baldwin said he was reluctant to take the plea but was convinced when he realized they could save Echols’ life.

JASON BALDWIN: I’m obviously ready to get out of prison. I want to be out, you know, deserve to be out. But I was ready to fight it in trial, in court, as much as possible. But he had it so much worse than I had it, you know, on death row, and it’s just insufferable to put a person through that, and for any more minutes.

AMY GOODMAN: That was Jason Baldwin, one of the West Memphis Three.

Friday’s move was a complicated legal proceeding that protects Arkansas from a potential lawsuit, should the men win a new trial, get acquitted, and seek to sue the state for wrongful imprisonment, prosecutors said. The plea means the defendants acknowledge officially the state has evidence against them but can continue to claim their innocence. The state added that it believes the defendants could easily have been acquitted in a new trial due to the deaths of witnesses, DNA tests, changing stories and stale evidence. If they were found guilty in a new trial, chances were high they would not have been convicted of capital murder and would have had lighter sentences.

For more, we go to Joe Berlinger, an award-winning filmmaker, journalist, photographer, co-director of a documentary on the case called Paradise Lost: The Child Murders at Robin Hood Hills. The film sparked an international movement to “Free the West Memphis Three,” which is what happened on Friday.

Joe Berlinger, just sum up what happened. It’s a complicated case, extremely significant, as well, because a man who was on death row, his sentence wasn’t just commuted, he was freed.

JOE BERLINGER: Yeah, I mean, it was an incredible day on Friday, and, I would say, bittersweet. You know, we have been fighting. You know, there’s a huge “Free the West Memphis Three” movement that has been going on for decades, and this is the day everyone has been waiting for, getting these guys out of prison, because everyone believes that the case was extremely shoddy, full of holes, and that these guys are absolutely innocent. But they were forced into accepting a plea deal, and that’s disturbing to us, because, first and foremost, it means that these guys have a sort of Damocles hanging over their head. They deserve to be free and fully exonerated, and yet they are leaving prison as convicted killers, just on a lesser charges, who have served time. And that’s just a travesty of justice, considering how flawed this original case was.

And what it’s basically telling the parents of the victims is that the state of Arkansas is going to allow the real killer to go free and that Arkansas is happy to shut the case on it. You know, on the one hand, at that press conference, the state of Arkansas was saying that they would probably be acquitted because of stale evidence and people changing their stories. And on the other hand, they’re convinced of the guilt, and the case is closed. And so, for all of us who have been fighting for justice in this case, you know, it’s a great day that they’re free, and it’s a terrible day in terms of, you know, the dishonorable thing that I think the state of Arkansas did.

AMY GOODMAN: Joe, we just have two minutes, but you are a storyteller as a filmmaker. If you could tell us what happened 18 years ago, what you understand and how the media exploited this story.

JOE BERLINGER: Well, you know, you’ve got to remember—in two minutes, it’s tough. You know, we’ve done three films over 18 years, each of them well over two hours long. But I’ll try to be concise.

You know, you have to remember, in the late '80s, early ’90s, there was a wave of satanic hysteria gripping this country, where crimes—where difficult crimes were explained by alleged satanic, devil-worshiping cults, and the FBI later proved that all of that was just nonsense. And so, you have a very religious, fundamentalist part of the world, West Memphis, Arkansas—and I don't mean that disrespectfully—and a place where people believe what the police tell you. And so, when the police are telling you that there’s a ring of devil-worshiping teens who have killed these children in the most horrible of ways, people were just scared to death.

And I think the local media—not everybody, but the local media, in general—thought it was easier, I guess, to tell the devil-worshiping story than to really do some hardcore investigation. There were a few lone voices, like Mara Leveritt of the Arkansas Times, who spoke out against this case, but generally speaking, the local media down there, at the time, just fanned the flames of this very salacious story, including, you know, there was a confession, an alleged confession, by Jessie Misskelley that was, you know, basically printed in the newspaper weeks before the trial, but printed in the newspaper as a contiguous statement that didn’t have any problems. When you really analyze the case, you know that he gave multiple inconsistent statements, and it’s a classic false confession. None of that context was given to the readers of the daily papers there; they just read this terrible confession.

And so, by the time the trial started, there was just a totally polluted jury pool and very flimsy and almost no—all circumstantial evidence, I should say, and no physical evidence linking these guys to the crime. And over the years, it’s just gotten worse and worse and worse. And I think the state, on Friday, realized that it would be much more embarrassing to have the upcoming evidentiary hearing in December that the Arkansas Supreme Court granted, which was the first positive step in this case in two decades. And I think they just—

AMY GOODMAN: Joe, we just have 10 seconds. Weren’t even some of the family members of the murdered eight-year-old boys sympathetic to these men—

AMY GOODMAN: —feeling that the real murderers were not found?

AMY GOODMAN: Joe Berlinger, I want to thank you very much for being with us, award-winning filmmaker, co-director of the documentary about the case called Paradise Lost: The Child Murders at Robin Hood Hills. 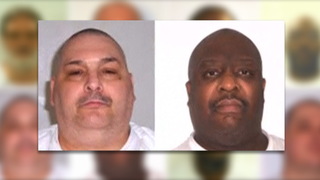