Internet archivists Brewster Kahle and Rick Prelinger discuss their efforts to build both a physical and digital library of every book ever published. “The idea is we can build a Library of Alexandria version two,” says Kahle. “It costs us about 10 cents a page, or about $30 a book, to photograph and then make it accessible and searchable for anybody.” The archivists also discuss their home movie project. “Home movies are astonishing, because they’re personal, not corporate, expression,” says Prelinger. “They’re individuals witnessing history, not simply great events, but also history everyday life.” The movies are being contributed by families and rescued from estate sales, among other sources. [includes rush transcript]

Brewster Kahle, you’re trying to build a library of every book ever published.

AMY GOODMAN: What are you doing?

BREWSTER KAHLE: The idea is we can build a Library of Alexandria version two. All the books, music, video ever published can be available to anybody anywhere that is curious enough to want to have access. That is our technological capability at this stage. The idea of, in digital form, you can actually put that in a small room, in terms of all of this in digital form. The physical materials, of course, also need to be protected, and come much larger. But the digital material can be digitized and made available, copyright willing, to anywhere—anybody, anywhere.

AMY GOODMAN: You have fought Google over their digitizing of libraries and your fear of their privatizing major libraries in this country. Explain that battle.

BREWSTER KAHLE: Yes, Google launched a very ambitious project to digitize some of the great libraries of the world. What became clear as this unfolded—and there were some—that their ambition was much more than just being a search capability as to be the bookstore, the library for the world. And we don’t need the library for the world. We need a library system. We need many libraries, lots of different perspectives. And there was a lawsuit we helped, on the anti-Google side, in filing amicus briefs. And we won that one, so that the one library to rule them all has been slowed down or stopped. Now is our possibility to build an open library system, using some of the technologies of the Googles and Yahoos and Microsofts to be able to build something really great and distribute it.

AMY GOODMAN: What they were trying to do with the various libraries, from Harvard to other libraries, was they would digitize them, then they would have what? The rights to them?

BREWSTER KAHLE: They were digitizing the public domain works and basically putting those under contractual obligations. So now you can’t even download the Google books without typing in an obscure phrase to be able to get one book at a time. This doesn’t make any sense. Then they took the out-of-print works, the 20th century works, and they had this scheme to go and have—basically make it into one big bookstore and license it so that people can only access it through Google in libraries. And this, of course, doesn’t make any sense, either. And so, that was the thing that has been most recently stopped.

RICK PRELINGER: And in the meantime, Internet—

RICK PRELINGER: In the meantime, Internet Archive was scanning books and making them publicly available with no restrictions. And we built up an extremely large open library.

AMY GOODMAN: I went to Archive.org in San Francisco and saw the machines where people sit and they turn the pages, as you scan these. And this is happening—you’re doing this around the world?

BREWSTER KAHLE: We’re doing this in 26 locations in six countries. It costs us about 10 cents a page, or about $30 a book, to photograph and then make it accessible and searchable for anybody. And this works for not only the older books, the public domain works, but the more recent books, where we’re making them available to the blind and dyslexic for free, also via lending, so one copy can be circulating digitally, emulating the restrictions of the old library system, to be able to make it so that people can have access to the long tail of materials that may still be under copyright but not accessible commercially.

AMY GOODMAN: This goes to one of our questions sent into our Facebook page. Larry Nocella asks, quote, “I admire the idea of preserving all that television footage,” talking about the 9/11 project, “but it seems a bit like information overload. Will the archival footage also have transcripts? How will it be searchable?”

BREWSTER KAHLE: Ah, boy, is that the big question? When you have this much material—and we have now millions of television hours—how do you move through it? We have the electronic program guides for everything, but that only gets you down to an hour of television. And for American television, fortunately, we’ve got the closed-caption data, which has been put on top of television broadcasts because of—to aid the deaf. We’ve been recording those since 2002. So, as newer archives than the September 11th Archive become available, those will be searchable, and you can find them based on speaker, what was said, across at least the American collections. We’re working with universities to try to get speech to text to get the rest of it.

AMY GOODMAN: Rick Prelinger, you’re working on an interesting project, a non-corporate view of history in the world. Explain your home movie project.

RICK PRELINGER: Right. I’ve been a home movie archivist and collector for a number of years, part of a very active community, especially of emerging archivists. And home movies are astonishing, because they’re, as you say, personal, not corporate, expression. They’re individuals witnessing history, not simply great events, but also history of everyday life. And we’re building a home movie collection at the Internet Archive for all of us to compare, understand, experience, to reuse, and for the use of scholars. And we hope that this will really change the way that people look at film, because film is not just movies that you go to and pay 10 bucks to see. Movies are also the way we look at each other.

AMY GOODMAN: How are you collecting these home movies?

RICK PRELINGER: Many of them come from families who contribute them. Some of them are, you know, the usual estate sales, eBay, all that sort of thing, just trying to rescue these bits that would otherwise be landfilled.

AMY GOODMAN: Brewster Kahle, do you think computers have improved the world? Are you concerned about the—the same way people benefit tremendously from having such incredible access to information, it is concentrated information and is gathering information on all of us.

BREWSTER KAHLE: What a mixed blessing we’ve built. When we’ve done out the graphs of how websites are used, the blessing is that they’re—even if you’re in the top 100,000 websites, you have a way of getting to a worldwide population. This wasn’t true when I was growing up. You either made it in the top 10, top 20 of whatever, or you were basically marginalized. On the other hand, we have 10 organizations that control 20 percent of all of the web viewing, 10 organizations worldwide. This is an enormous concentration of power. So the idea of making a distributed network has allowed concentration as well as distribution. We tend to be on the distribution side, but it’s a mixed blessing.

AMY GOODMAN: And where are you building your library?

BREWSTER KAHLE: We’re building a physical library now and archiving physical books in Richmond, California. So these books are protected in boxes and then in converted shipping containers to be able to handle the environmental controls, and then the—and then in warehouses protected by nonprofits. The digital materials, we can make copies of. And we’ve—we have two copies within the United States, and we have a partial copy in Alexandria, Egypt, which is, I guess, fitting, as we have a large-scale swap agreement with them to archive their materials, and they archive ours. And also in Amsterdam, we have a partial copy. If there are five or six copies of these materials worldwide, I think I’d feel safe.

AMY GOODMAN: We have to wrap on that. I want to thank you, Brewster Kahle, and you, Rick Prelinger, remarkable digital archivists and librarians. 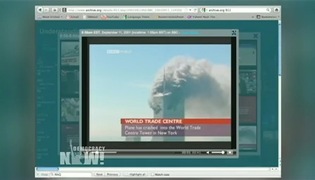