Shored Up: Debate over Development on Barrier Islands Intensifies After Hurricane

Hurricane Irene caused significant beach erosion as it made landfall at North Carolina’s Outer Banks, a 200-mile-long string of barrier islands. It also crashed into the Jersey Shore, Long Island and other popular East Coast beaches this weekend. Many of these areas are filled with high-priced oceanfront real estate, and the battle to save these beaches and communities costs billions of dollars each year. We speak with Ben Kalina, who was just in Long Beach Island, New Jersey, covering the effects of Hurricane Irene. He is associate producer of the documentary called “A Sea Change” and is working on another documentary about developing barrier islands titled “Shored Up.” “Maybe beach replenishment is not the answer here,” says Kalina. “In order to avoid massive casualties and loss of life and loss of property in the future, we need to start taking a little bit different look at how we develop these islands.” [includes rush transcript]

AMY GOODMAN: Tropical Storm Irene caused significant beach erosion as it made landfall at North Carolina’s Outer Banks, a 200-mile-long string of barrier islands. It also crashed into Long Island and other beaches up and down the East Coast this weekend. Many of these areas are filled with summer homes, oceanfront real estate worth millions of dollars. The battle to save these beaches and communities costs billions of dollars a year.

For more, we’re going to Philadelphia to speak with Ben Kalina, who just came back from Long Beach Island, New Jersey, covering the effects of Hurricane Irene. He’s associate producer of the documentary called A Sea Change and is working on another documentary about developing barrier islands, titled Shored Up. Ben is also a Vermont native, which is being so hard hit as we speak.

Ben Kalina, talk about Long Beach Island, New Jersey, and what it means for global warming, for the environment, these barrier beaches being developed.

BEN KALINA: Sure. Well, Long Beach Island, New Jersey, is about 18 miles long and, at some points, as narrow as two blocks, and, on average, about three feet above sea level. And, you know, if that gives you a picture of what the island looks like from above, you can see that it’s basically a thin strip of sand that lies in the ocean just off of the coast of New Jersey. And, you know, barrier islands, like Long Beach Island, cover about 13 percent, 15 percent of the world’s coastlines. And in New Jersey, as in a lot of the East Coast of the United States, these islands have been really heavily developed over the past hundred years, more so towards the Northeast, where they’re closer to big population centers. You know, they’re popular tourist destinations, and they continue to be so.

AMY GOODMAN: Talk about the documentary you’re working on, Shored Up.

BEN KALINA: Sure. Yeah, so Shored Up takes a look at Long Beach Island, in particular, and we’re also going to be going down to North Carolina looking at the Outer Banks. And really, what the film does is looks these dynamic zones, and in this case, to some extent, through the eyes of the surfing community, because surfers really have pretty much a unique vantage point on the forces that, you know, cause these islands to exist and that cause them to erode, because—I don’t know if—it’s probably not a coincidence, but, you know, the first casualty down in North Carolina, I believe it was, was a surfer who was out trying to catch some waves. And the storms in the Northeast that bring the best surfing are also the ones that bring the most erosion. And so, you know, it’s really kind of a metaphor, a way into this story.

But, you know, the surfing community has also traditionally, historically been active around beach replenishment, which is something that has a major impact on the surfing conditions and surf waves. But beach replenishment is also—really has become one of the primary ways that municipalities and counties and the federal government try to keep these islands in place and keep them from, you know, getting broken up by storms and keep houses from falling into the sea. And so, you know, there’s a lot of—it’s a pretty complex issue, because not only does it affect surf breaks, it affects the slope of the shore, and there’s increased neck injuries and other kinds of injuries for recreational swimmers and others. But there are also just—you know, it’s a very expensive program. It’s one that locals can’t afford by themselves. And so, it’s a federal program, and really it drives the economic development of the shoreline. Without beach replenishment, you know, some of these islands would be in a pretty sketchy situation.

AMY GOODMAN: What do you think should happen—

BEN KALINA: And so, that’s what the film is about.

BEN KALINA: What do I think should happen? Well, I think that there needs to be a little bit of a wider—sort of like Bill McKibben and Governor Shumlin were both talking about, really. We need to understand that these islands are extremely vulnerable. And beach replenishment is something that can work in the short term, it can work in the medium term. But, you know, when I was on Long Beach Island this past weekend, I was at the emergency operation center with the Beach Haven police force. And, you know, you really got the sense that, you know, they were unsure—there was a certain amount of uncertainty there. And these are people that have lived there their whole lives. They’ve seen one storm after another, one nor’easter after another. But when this hurricane was supposed to have direct impact on the island, no one really knew what was going to happen. And you really didn’t get the sense—these aren’t folks that, you know, that tend to get too nervous, in general. But those islands, the last time there was a major storm—it wasn’t even a hurricane, it was a nor’easter in 1962—that hit that island directly, it cut the island in three places. You know, one of the towns lost half their homes, washed out to sea.

And, you know, as sea level rises, and it rises—it’s been rising, you know, 12 to 18 inches a year, just based on glacial melt, you know, not related to human-induced climate change. But you add climate change into it, and you really need to look and say, you know, do we need to start coming up with ways of perhaps saying, you know, if a house is damaged, perhaps you can’t build in the same place? You know, maybe that house needs to be—maybe nature needs to take its course. But there need to be some calculations that look to the future and say, you know, maybe beach replenishment is not the answer here. Maybe jetties and groins are not the answer here. Maybe there’s—in order to avoid like massive casualties and loss of life and loss of property in the future, we need to start taking a little bit different look at how we develop these islands.

AMY GOODMAN: Ben Kalina, I want to thank you very much for being with us, works on documentaries about environmental justice, was just out on Long Beach Island in New Jersey, covering the effects of Hurricane Katrina—rather, Hurricane Irene, associate producer of the documentary A Sea Change and is working on another documentary about developing barrier islands, titled Shored Up. 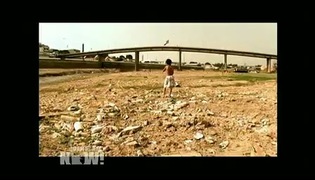