We speak with the widow of a U.S. Army Ranger who confronted former Secretary of Defense Donald Rumsfeld about her husband’s suicide on Saturday. Ashley Joppa-Hagemann introduced herself to Rumsfeld during a book signing by handing him a copy of her husband’s funeral program at a base south of Tacoma, Washington. She says Rumsfeld inspired her husband to join the Army after 9/11, but he later became disillusioned with the reasons for the war. Her husband, 25-year-old Staff Sergeant Jared Hagemann, killed himself ahead of what his wife says was his eighth deployment to Iraq and Afghanistan. His body was found on June 28, 2011, at the Joint Base Lewis-McChord in Washington State. More than 18,000 soldiers returned to the Joint Base Lewis-McChord from combat tours last year. And while the Army says it is trying to shore up mental health services there, Joppa-Hagemann questions its success. “I want to confront the man whose lies led my husband to join the military, and so many other soldiers,” says Joppa-Hagemann. “That’s what I wanted to do, and that’s what I did.” [includes rush transcript]

AMY GOODMAN: We turn now to the widow of a U.S. Army Ranger who on Saturday confronted former Secretary of Defense Donald Rumsfeld about her husband’s suicide. Ashley Joppa-Hagemann introduced herself to Rumsfeld during a book signing by handing him a copy of her husband’s funeral program at a base south of Tacoma, Washington. She says Rumsfeld inspired her husband to join the Army after 9/11, but he later became disillusioned with the reason for the war.

Her husband was 25-year-old Staff Sergeant Jared Hagemann. He killed himself ahead of what his wife says was his ninth deployment to Iraq and Afghanistan. His body was found June 28th at the Joint Base Lewis-McChord in Washington State.

More than 18,000 soldiers returned to Fort Lewis from combat tours last year. And while the Army says it’s trying to shore up mental health services there, Ashley Joppa-Hagemann questions its success. She joins us now from Seattle, Washington, to talk about her husband, Jared.

We also called an official from the Joint Base Lewis-McChord in Washington to join us on the show, but they were unable to accommodate our request.

Ashley, our condolences on the death of your husband, first off. Thank you very much for being with us.

ASHLEY JOPPA-HAGEMANN: Thank you for having me.

AMY GOODMAN: Can you talk about what you did with Secretary of Defense Donald Rumsfeld? Explain the scene this weekend.

ASHLEY JOPPA-HAGEMANN: I just had information that Donald would be here on Fort Lewis doing a book signing. And it was someone’s idea to actually go and see him at the book signing, and I was excited, and I agreed. I was like, “Yeah, let’s go. Let’s do this. I want to confront the man whose lies led my husband to join the military, and so many other soldiers.” And that’s what I wanted to do, and that’s what I did. And for me, that was a really exciting moment, for me. For my husband, I know it was, too.

AMY GOODMAN: You handed him the funeral program of Jared, of your husband, Staff Sergeant Hagemann?

ASHLEY JOPPA-HAGEMANN: Yes, I did. I told him that I wanted him to see my husband, and so he would know—he could put a face with at least one of the soldiers that had lost their lives because of his lies from the 9/11.

AMY GOODMAN: And what was his response?

ASHLEY JOPPA-HAGEMANN: All I remember is him saying, “Oh, I heard about that.” And after that, all I remember is being bombarded with security personnel and being pushed out and told not to return. It would have been maybe not so difficult, if maybe he had actually made my husband feel—or made it sound like my husband was an actual person. But to call him and say “that” rather, not “I heard about him” or “heard about, you know, Jared,” that was a blow. That one really hurt. But it just proves that our soldiers don’t mean anything to anybody who’s in power.

AMY GOODMAN: Were you actually taken away from the former secretary of defense, from Rumsfeld?

ASHLEY JOPPA-HAGEMANN: Yes. They grabbed us by our arms and pushed us along. And on the way out, I had stopped, because Jorge had gone with me, and I had stopped to try and see where he was at, because I didn’t know where he was, because we had so much security around us, and they just kept, like, pushing me along. And he just said, “Keep moving.” And we were peaceful, we were calm. And so, I just kept doing what he said.

AMY GOODMAN: Tell us about Jared. How many tours of duty did he serve in Iraq and Afghanistan? He was an Army Ranger, like Pat Tillman.

ASHLEY JOPPA-HAGEMANN: Yes. He was just an amazing person. He was so charming and so—he loved life. He loved—he had so much respect and love for everybody, and he put everyone before him. And he was just—he was an amazing person.

AMY GOODMAN: How many—

ASHLEY JOPPA-HAGEMANN: I mean, when I first met him—I’m sorry?

AMY GOODMAN: How many tours of duty did he serve?

ASHLEY JOPPA-HAGEMANN: Like I said before, possibly—you know, around eight or nine. I’m thinking it’s more around the eight mark, but it’s, yeah, eight or nine, this would have been.

AMY GOODMAN: Did he know him?

ASHLEY JOPPA-HAGEMANN: No, I don’t believe so.

AMY GOODMAN: What was it about Donald Rumsfeld that inspired Jared to go into the military?

ASHLEY JOPPA-HAGEMANN: Pretty much the whole Bush administration and their lies about, you know, WMDs. And my husband was the kind of person who stood up for what he believed in, and he loved this country. And he thought he was doing what needed to be done. And over the years, he found out the truth. And it—every tour just ruined him. It took a part of him every time.

AMY GOODMAN: Can you talk about whether Jared sought help? Talk about his suffering through the continued tours.

ASHLEY JOPPA-HAGEMANN: After the first few tours, he didn’t—he changed. He was cold. He didn’t want to talk. It was really rough. And I’d have to say, in '09, when he finally came back from maybe his fourth deployment—I'm not sure—he actually tried to tell—he told the Rangers that he quit. He didn’t want nothing to do with them. And he admitted himself to Five North, and they gave him counseling for his drinking. And after a while, they told him that he had to do it on his own time. It was interfering with his work. They put him in the S-5 shop in order to accommodate his counseling. And a few times, they had given him some antidepressants, some sleeping pills, which only made it worse, because it was like a 30-day supply. Then, as soon as it ran out, he had to go through the process all over again to get anything. So, it was just more of a hassle than anything.

AMY GOODMAN: Ashley, your husband was not alone. At Fort Lewis, July saw a peak of suicides—five in one month. There were nine in 2009, nine in 2010, five in just July alone. Yet the military is not calling your husband’s suicide a suicide, though they are saying it’s a self-inflicted wound?

ASHLEY JOPPA-HAGEMANN: There are suicides at JBLM every month. Whether or not they report them as suicides, I don’t—I can’t comment on that. I don’t know. So I wouldn’t say it spiked. I would say that it’s probably pretty—pretty high every month. It’s not anything new. And yes, it was self-inflicted. Whether or not that they had any—not thing, but any take or part in my husband taking his life, that’s what the investigation is investigating.

AMY GOODMAN: Ashley, we have to leave it there, but we’re going to do an interview and put it online at democracynow.org. Thanks so much for joining us. 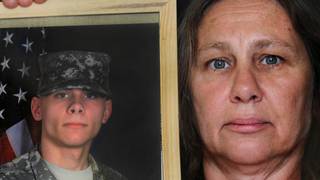