If a Tree Falls: A Story of the Earth Liberation Front tells the story of environmental activist, Daniel McGowan. Click here to see our July 2011 interview with co-director Marshall Curry. In a 2007 exclusive, we interviewed McGowan after he was sentenced to seven years in prison for his role in two acts of arson in Oregon in 2001. The judge ruled that one of the fires was an act of terrorism.

Paradise Lost 3: Purgatory is the third film in a series that chronicles the wrongful arrest, 18-year imprisonment and eventual release of the West Memphis 3. Click here to see our August 2011 interview with co-director Joe Berlinger.

Incident in New Baghdad examines one of the most notorious incidents of the Iraq War — the July 2007 Apache helicopter assault on two Reuters journalists and twelve civilians in Baghdad in 2007 that was captured in a video released by WikiLeaks. Click here to see our October 2010 interview with U.S. Army Specialist Ethan McCord, who bore witness to the devastating carnage, found and rescued the two children caught in the crossfire, and soon turned against the war that he had enthusiastically joined only months before. 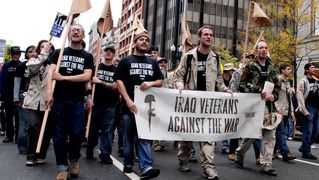