Robert Redford is well known as an actor, a director, a producer and an activist. Since 1980, through the Sundance Film Festival and the Sundance Institute, Robert Redford has helped independent voices develop their craft—in film, in theater and in music—to reach larger and newer audiences. We speak with Redford about how independent cinema became his passion. “To me, stories that were worth telling were stories about what’s the truth beneath the truth that you’re given, or think you know… I wanted to focus on independent films to keep alive the independent spirit through storytelling and movie making.” [includes rush transcript]

AMY GOODMAN: Over the weekend here in Park City, Utah, we spoke with Robert Redford, the founder of Sundance. He’s an Academy Award-winning director, renown actor, producer, activist. And I asked him, with all of his great commercial success in Hollywood, how was it that independent film has become his passion?

ROBERT REDFORD: Well, I guess it all begins when you’re young, you know, and how you were raised. I was raised in a lower, working-class community in Los Angeles. It was very mixed. It was mostly Mexican American. We were one of the few Anglo families. So I saw the other side of things. But I also was raised at a time, during the Second World War, where everything was harmonious in this community. Nobody lived well, but they were bonded as neighbors. And when the war ended, something weird happened: that unanimity went away. And suddenly there were gangs. And suddenly there was separation. And it got to be such a violent neighborhood, we couldn’t live there much anymore. That was one thing, that because money came into the—when money came back out of the war effort into the country, suddenly what you had coming up was a real, solid class/caste distinction. And they, the Mexican people, were on the lower part of it. I didn’t understand that then. I couldn’t understand why my friends were suddenly—seemed to be my enemies.

The other thing was that because I was an athlete as a kid—that was how I got by—I remember hearing these slogans, and they were very American slogans. And I remember buying totally into the idea, this was the greatest country in the world, and with all these freedoms that we should appreciate. And I felt that, and I still feel that. It is such a great country that I think I probably take it personally, as an artist, when things aren’t what they claim they should be. So when I first heard “It doesn’t matter whether you win or lose, but it’s how you play the game that matters,” and I realized, no, that was a lie. This is a country that’s all about winning.

And when you had the sloganeering that went on, around political people and so forth, and then you had people waving the American flag right and left, like Nixon, and you saw what he was capable of, undercutting democracy, undercutting the American flag, by his behavior, and that he was—in fact, turned out to be a pretty mean-spirited guy, that would—you say, “Wait a minute. What’s the story here?” It’s a great country. I love this country. I’ve traveled enough around the world to realize how lucky we are with our freedoms. But what’s going on here?

So, I guess I got—to me, stories that were worth telling were stories about what’s the truth beneath the truth that you’re given, or you think you know. And I think that, like All the President’s Men, was, well, what’s the truth? What’s the story about two guys that did something other people weren’t doing that managed to take down a top figure in government? How did that work? You know, it was about hard work. And so, for me, I started to get really obsessed with, OK, if we’re so obsessed about winning, what’s a personal story? What’s the story behind quiz shows that made so much money? And I was—I just went along with it. I was a young acting student in New York. I watched $60,000 Question, whatever, hundred, whatever it was, or 21. I thought, “Wow! Except there’s something wrong here. The guy that’s winning all this, everybody is going all over themselves on this guy, except he doesn’t—I don’t know that I believe him.” But I never doubted the whole system was corrupt. I never doubted the whole system was rigged. When I found that out, I thought, well, that’s another example. What’s the truth beneath what you’re given?

So I think that’s what’s driven me and led to the festival, because I guess the two words, to me, that were American and important to me were “individual” and “independence.” That’s—we’re lucky to be able to have that and survive with it. So I think I’ve been focused on that, and therefore the mainstream industry, which I’ve been a part of—and fortunately, I’ve loved many of the films I have made. But as the mainstream was following the youth market, it was beginning to get narrower, and those films weren’t going to be made so much anymore. So I wanted to focus on independent films to keep alive the independent spirit through storytelling and movie making. So that’s what led to the festival.

AMY GOODMAN: That was Robert Redford talking about the founding of the Sundance Film Festival. And this late breaking news, Oscar nominations have just been announced. Among those nominated in the documentary category, Paradise Lost 3: Purgatory, the third film in a series that chronicles the wrongful arrest, eighteen-year imprisonment and eventual release of the West Memphis Three, directed by Joe Berlinger and Bruce Sinofsky. Berlinger’s film Under African Skies premiered here at Sundance. And in the documentary short category, The Tsunami and the Cherry Blossom, about Japanese survivors, directed by Lucy Walker, is one the shortlist, as well as If a Tree Falls: A Story of the Earth Liberation Front. 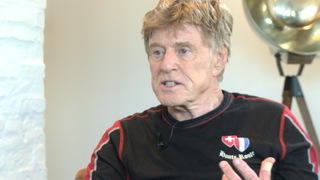