This year Democracy Now! is celebrating our 25th anniversary—that’s 25 years of bringing you fearless, independent journalism. Since our first broadcast in 1996, Democracy Now! has refused to take corporate or government funding, because nothing is more important to us than our editorial independence. But that means we rely on you, our audience, for support. If everyone who tunes in to Democracy Now! gave just $4, we could cover our operating expenses for the entire year. Really, that’s all it would take. Right now a generous donor will TRIPLE your donation, making it three times as valuable to Democracy Now! Please do your part today, and thank you so much.
-Amy Goodman

This year Democracy Now! is celebrating our 25th anniversary—that’s 25 years of bringing you fearless, independent journalism. Since our first broadcast in 1996, Democracy Now! has refused to take corporate or government funding, because nothing is more important to us than our editorial independence. But that means we rely on you, our audience, for support. If everyone who tunes in to Democracy Now! gave just $4, we could cover our operating expenses for the entire year. Really, that’s all it would take. Right now a generous donor will TRIPLE your donation, making it three times as valuable to Democracy Now! Please do your part today, and thank you so much.
-Amy Goodman

Minnesota Rep. Michele Bachmann won the Iowa straw poll in August but placed sixth with just 5 percent of the vote in last night’s Iowa caucus. We discuss the results with Ryan Rhodes, a Bachmann supporter and chairman of the Iowa Tea Party. Rhodes says Bachmann’s poor showing stems from a surge of Tea Party voters swinging their vote over to Rick Santorum instead of third-place candidate Ron Paul. Regarding the Occupy movement that has protested both Republicans and Democrats in Iowa, Rhodes says, “They understand President Barack Obama has not kept his promises. And he is running a campaign that people haven’t been able to trust.” [includes rush transcript]

AMY GOODMAN: We’re joined now by three guests. Ed Fallon is host of Fallon Forum on WOW-FM in Iowa, served as a Democratic member of the Iowa General Assembly from 1993 to 2006, once ran for governor in Iowa, and also was arrested as part of Occupy Iowa.

We also are joined in Iowa by Ryan Rhodes, who helped found the Iowa Tea Party.

And joining us from Rick Santorum’s home state of Pennsylvania is Will Bunch, senior writer for the Philadelphia Daily News, author of the popular blog “Attytood,” who has been covering Rick Santorum for years.

We wanted to go first right now to Ryan Rhodes. Ryan, what is your assessment of the incredibly close race last night, with Mitt Romney eking out by just eight votes over Rick Santorum the Iowa caucuses victory?

RYAN RHODES: Well, I think it shows two things: one, the race is—is still very fluid and undecided, to an extent; and two, that you still have to do some retail campaigning in Iowa, and you have to get out into the areas and make your case. And so, I congratulate both Rick Santorum and Mitt Romney. I think they had great showings. I think it’s also a testament to Paul. I mean, Ron Paul [inaudible] votes. We have to understand that, as well. So, I don’t think that’s any small feat, in and of itself. And he was advocating a very—a very limited government, kind of anti-corporation, antiwar philosophy that I think, in some cases, people are—you know, parts of that is really crossing party lines. I know there’s different things each person has kind of decided that it is their thing to key in on, but all in all, I mean, he really advocates for virtually nothing at the federal level.

AMY GOODMAN: You were with Michele Bachmann to the end, unlike her, what, chief of staff, who defected at the very last minute to support Ron Paul, the Texas Congress member. What happened to Michele Bachmann? I mean, she is from Iowa. She campaigned there vigorously. She won the Iowa straw poll. Yet, she seemed to collapse, was the last except for, well, the person who didn’t run at all, Huntsman, who is in New Hampshire.

RYAN RHODES: Yeah, I think it was—it was kind of one of those things where you’ve got your ups and downs. You know, Kent left, and that certainly—that certainly did hurt her. But I think it actually helped Santorum and hurt Paul, in the long run, because I think people who were on the fence, you know, some of them went over that way, to Rick instead of Paul or instead of adding more to Michele’s vote. But it certainly did tatter—I mean, I think it made the difference between a fourth and a sixth place finish. And that’s really something—something there that I think is a major key. And so, getting hit with something like that and then continuing to move on in a positive way by Michele, you know, I still have the utmost respect for somebody—for that woman as somebody—I’m sure many of you may not agree with her, and there’s people that can disagree with her on an issue, but she’s an honest woman. And that—that, I can say.

AMY GOODMAN: I expect she’s going to be getting a bunch of calls today, Ryan, from the other Republican candidates for president who want her support. Do you know which direction she will lean? She said she’s already bought tickets for South Carolina. Is she—

RYAN RHODES: Well, she’s certainly not out of the race. And so I think that she’ll—you know, she’ll be looking at what to do in terms of moving forward and kind of strategizing to put herself back in contention for the top three spots there.

AMY GOODMAN: Is she hoping to be tapped as a vice-presidential candidate?

RYAN RHODES: For Michele, it’s never been about that. It’s been about specifically advocating issues that she feels the need to get out there, particularly, first and foremost, the repeal of Obamacare.

AMY GOODMAN: I wanted to ask you about a statement that Obama’s campaign manager, Jim Messina, made last night, talking about the “extremist Tea Party agenda” which “won a clear victory.” This was shortly after the results were announced. He said, “No matter who the Republicans nominate, we’ll be running against someone who has embraced that agenda in order to win—vowing to let Wall Street write its own rules, end Medicare as we know it, roll back gay rights, leave the troops in Iraq indefinitely, restrict a woman’s right to choose, and gut Social Security to pay for more tax cuts for millionaires and corporations.” Do you think that is a fair assessment of the Tea Party position?

RYAN RHODES: I think it’s kind of—it’s kind of funny and hypocritical, coming from an administration who’s had more corporate cronyism than we can even count, when you look at Solyndra and GE and the bailouts, I think. I think the fact that they went in there and actually cut benefits and cut Medicare with their—with the Obamacare, is in there, and I think also looking at a president who is still in the Iraq War, and quite frankly, isn’t even—you know, barely going to necessarily get us out of there by the time that George Bush predicted he would, too. So, I mean, he hasn’t really done any of those things. He’s claiming to stop the war, but yet it’s ending in no—in no less time than George Bush would have ended it. He didn’t close—he didn’t close Guantánamo. I mean, look, I don’t particularly agree with him on every detail or, you know, agree with every detail of how that’s going, but the fact is, those are promises he made, and they’re not promises he’s keeping. And I think that’s why, you know, even for this, I don’t particularly agree with all of the things about Occupy Wall Street, but I do see the fact that they understand President Barack Obama has not kept his promises. And he is running a campaign that people haven’t been able to trust. So, for him to go out and say that [inaudible]—

AMY GOODMAN: Ryan Rhodes, we’re going to go to break, but we’ll come back to this discussion. Ryan Rhodes is with us, one of the founders of the Iowa Tea Party movement. Will Bunch will join us to talk about Rick Santorum. He’s in Philadelphia. And Ed Fallon is joining us from Des Moines, host of Fallon Forum, served as a member of the Iowa General Assembly. This is Democracy Now! Back in a minute. 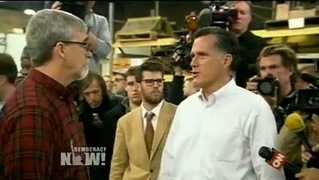 Recount Leaves Santorum Ahead of Romney in Iowa GOP Caucus