As consumers worldwide flood Apple Stores to buy the new iPhone 5, we look at why thousands of Chinese workers at a key Apple manufacturing plant walked off the job last week. The group China Labor Watch says up to 4,000 Foxconn workers walked off the job in protest of new employee demands on hours and product quality. Foxconn initially denied that a strike was taking place but later said a small number of workers had participated in a dispute that was quickly resolved. We’re joined by Li Qiang, the founder and executive director of China Labor Watch. [includes rush transcript]

AMY GOODMAN: As American consumers flood Apple stores to buy the new iPhone 5, thousands of Chinese workers staged a one-day strike Friday at the Foxconn factory known for poorly treating workers who help make Apple products such as the iPhone. The group China Labor Watch says up to 4,000 Foxconn workers walked off the job in protest of new employee demands, including working through a holiday that began last week. Foxconn also allegedly raised overly strict demands on product quality without providing worker training for the corresponding skills, leading to high levels of stress. This is what one Foxconn worker told a CNN reporter earlier this year about her experience. She preferred to remain anonymous, so as to not lose her job.

FOXCONN WORKER: [translated] It’s so boring. I can’t bear it anymore. Every day was like: I get off from work, and I go to bed; I get up in the morning, and I go to work. It became my daily routine, and I almost felt like I was some kind of animal.

NERMEEN SHAIKH: That was Chinese—that was a Chinese worker at Foxconn, Apple’s controversial Chinese supplier. Foxconn initially denied that a strike was taking place but later said a small number of workers had participated in a dispute that was quickly resolved. Late last month, thousands of workers at another Foxconn plant also rioted. Democracy Now! contacted Apple but did not receive a response.

Well, for more, we’re joined now by the founder and executive director of China Labor Watch, Li Qiang. He will be translated from Chinese into English by Bessie Zhang.

Welcome to Democracy Now!, Li Qiang. Can you talk about what happened last Friday at the Foxconn plant in China?

LI QIANG: [translated] Because there was a complaint from several clients of the iPhone 5 that there are scratches or dentures, and then so Apple increased the standards of the iPhone 5, the cases, and other qualifications. So, there is complaints. Then also the workers, they cannot—they were not received such training. And then, when they are bearing such pressure, they started to hit the quality control inspectors, because those inspectors, they’re examining very strictly on those qualities. So, there is conflicts. And then they decided to stop working on the production lines.

AMY GOODMAN: Li Qiang, what do you—what do you think needs to happen now? We are hearing about the thousands of people walking out. There are millions of phones all over this country. The iPhone 5 is probably one of the most popular products in history. What do you think Americans should know, people all over the world should know?

LI QIANG: [translated] I think they can exert some influence on the Apple company so that Apple can try to improve some of the working conditions of those Foxconn factories in China, and so Apple can offer some trainings to the workers so that their working conditions can be improved and their benefits and salaries can be increased somehow.

This time for the strike was originally caused by the complaints from the clients of the—or the consumers of the iPhone 5. Because they wrote letters or emails to Apple company, and then the Apple company just transferred this pressure on to Foxconn CEOs or management, and then Foxconn transferred this pressure or put this pressure on to the factories. Because there’s the products that have been manufactured on the production lines cannot live up to the standard of their qualifications, so the workers started to hit the quality control inspectors.

AMY GOODMAN: Li Qiang, we want to thank you very much for being with us, founder and executive director of China Labor Watch. Li Qiang, thank you so much.

We’ll be at the Lensic tonight in Santa Fe, tomorrow in Los Alamos, tomorrow night in Albuquerque. 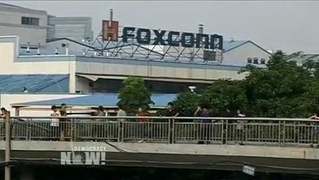