Green Party presidential nominee Jill Stein and vice-presidential candidate Cheri Honkala were arrested Tuesday as they attempted to enter the grounds of the presidential debate site at Hofstra University. Like other third-party candidates, Stein was blocked from participating in the debate by the Commission on Presidential Debates, which is controlled by the Republican and Democratic parties. Stein and Honkala were held for eight hours, handcuffed to chairs. As she was being arrested, Stein condemned what she called “this mock debate, this mockery of democracy.” Just hours after being released, Stein joins us in the Democracy Now! studio. [includes rush transcript]

In a moment, we’ll be expanding last night’s debate by including responses from three third-party candidates to the same questions put to the major-party candidates. But we want to begin with Green Party nominee Dr. Jill Stein. On Tuesday, she and her running mate, Cheri Honkala, were arrested as they attempted to enter the debate site. Democracy Now! was there at the time of their arrest.

DR. JILL STEIN: We are here at the barred gates of American debates to say that we need to open up this debate and make it a full, fair and inclusive debate.

DR. JILL STEIN: Our Green campaign is on the ballot for 85 percent of voters. Eighty-five percent of voters deserve to know who their choices are in this election and what the real solutions are that can solve the desperate problems that we’re facing. The Commission on Presidential Debates makes a mockery of democracy by conducting this fake and contrived debate.

HOFSTRA OFFICIAL: Do you have credentials?

CHERI HONKALA: Yes, we do have credentials.

HOFSTRA OFFICIAL: Can I see?

CHERI HONKALA: We’ve been on the ballot in 85 percent of the country.

HOFSTRA OFFICIAL: This is an event. This is something that Hofstra has sponsored. It’s an event, an educational experience for our faculty, our students.

DR. JILL STEIN: Well, we think it’s more than that.

POLICE OFFICER 1: You’ve got to move out [inaudible] run over by a car.

POLICE OFFICER 2: If you could just slide over here.

POLICE OFFICER 3: Just slide over is all we need you to do, just for a minute while she makes [inaudible]

POLICE OFFICER 1: [inaudible] a little bit. You’re going to get run over.

POLICE OFFICER 2: You can stand here, just slide over.

POLICE OFFICER 1: Move in with the traffic cone.

POLICE OFFICER 3: While she makes her phone call [inaudible].

DR. JILL STEIN: Well, we’re here to stand our ground. We’re here to stand ground for the American people, who have been systematically locked out of these debates for decades by the Commission on Presidential Debates. We think that this commission is entirely illegitimate; that if—if democracy truly prevailed, there would be no such commission, that the debates would still be run by the League of Women Voters, that the debates would be open with the criteria that the League of Women Voters had always used, which was that if you have done the work to get on the ballot, if you are on the ballot and could actually win the Electoral College by being on the ballot in enough states, that you deserve to be in the election and you deserve to be heard; and that the American people actually deserve to hear choices which are not bought and paid for by multinational corporations and Wall Street.

POLICE OFFICER 4: Ladies and gentlemen, you are obstructing the vehicle of pedestrians and traffic. If you refuse to move, you are subject to arrest.

Remove them. Bring them back to arrest them, please.

POLICE OFFICER 5: We’ll help you. Come on. Thank you, ma’am.

POLICE OFFICER 6: Come with us.

POLICE OFFICER 5: Just come with us.

POLICE OFFICER 6: Thank you. You guys have to stay here. All right, everybody, we’re going to ask you to please move back.

DR. JILL STEIN: Well, I’d say this is what democracy looks like in the 21st century. I’m afraid it’s going to take some—some politics and courage here to get our democracy back. So, more to come.

AMY GOODMAN: Green Party candidates Jill Stein and Cheri Honkala were held for about eight hours before being released. Dr. Stein joins us now in our studio as part of our “Expanding the Debate” special. But before we go to it, Jill Stein, what happened? You were arrested and held for eight hours? Where and how?

DR. JILL STEIN: We were held at a facility, especially created for detaining protesters at the debates. It appeared to be a warehouse which had been specially equipped. It was obviously—you know, they were prepared to handle a lot of people. They had 13 officers there and three plainclothesmen. For most of the time, it was just Cheri Honkala and myself, yet they felt the need to keep us in tight plastic restraints, tightly secured to metal chairs.

AMY GOODMAN: You were handcuffed to chairs?

DR. JILL STEIN: We were handcuffed to chairs for the entire duration of our time there.

AMY GOODMAN: How long were you handcuffed to the chair?

DR. JILL STEIN: It was about eight hours. And we were charged only with violations, not even with misdemeanors, and yet they felt compelled, despite having 13 officers there to keep these two women, mothers, handcuffed to chairs for the entire time.

AMY GOODMAN: Did you ask to be released?

DR. JILL STEIN: Yes, yes, and they said, no, we couldn’t be released because then we might go wandering around. And we said, “Well, how about if we tell you that we will stay in our chairs?” And they said, “No, that’s not OK.”

AMY GOODMAN: Handcuffed to the chairs—

AMY GOODMAN: —for the eight hours.

DR. JILL STEIN: That was their procedure for handling people who were arrested at the debates.

AMY GOODMAN: Did you get to see the debate in the warehouse?

AMY GOODMAN: And then they released you as soon as the debate was over?

DR. JILL STEIN: No, they held us for about another half-hour, hour, and then they released us, telling us that our car was waiting in the parking lot. It was actually a Secret Service car, apparently, that was waiting in the parking lot. We didn’t—we weren’t allowed to make a phone call. There was no phone that was working. They wouldn’t—we didn’t have ours. We had given our phones to our assistant, so it was—you know, it took quite a bit of work to be able to borrow a cellphone from someone in a gas station—you know, there we are in the freezing cold—to even be able to find our staff.

AMY GOODMAN: They didn’t give you an opportunity to make a call during this entire period of your detention?

DR. JILL STEIN: No, they did at one point. They allowed me to return a call to our lawyer. But at the time, we didn’t know when we would be released, so there were no arrangements made for a pickup. And they actually told our staff that they would be arrested if they continued to wait on site, so they had to leave.

AMY GOODMAN: We are going to go now to our “Expanding the Debate.” We will be joined by not only Dr. Jill Stein, who, now released, will join the debate; Justice Party presidential nominee Rocky Anderson, the former mayor of Salt Lake City; and in Rocky Mount, Virginia, Constitution Party presidential nominee Virgil Goode. We’ll be going to them and Mitt Romney and President Obama in a moment. 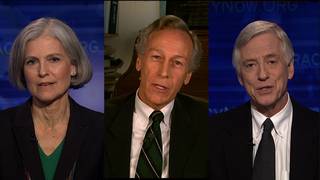