As the White House begins a series of meetings today on the looming “fiscal cliff,” a coalition of the largest corporate firms and advocacy groups is lobbying for wide-ranging cuts in government spending, including to programs like Medicare and Social Security. The group, which includes 80 of the country’s most powerful CEOs, is called the Campaign to Fix the Debt. It was co-founded by former Clinton White House Chief of Staff Erskine Bowles and former Republican Sen. Alan Simpson, previously the co-chairs of President Obama’s bipartisan National Commission on Fiscal Responsibility and Reform. Critics have accused the group of using the budget crisis to push for corporate tax cuts. We are joined by Sarah Anderson, director of the Global Economy Project at the Institute for Policy Studies and co-author of the new report, “The CEO Campaign to 'Fix' the Debt: A Trojan Horse for Massive Corporate Tax Breaks.” [includes rush transcript]

AMY GOODMAN: We turn now to the national debt. As Congress resumes its lame duck session today, the issue of tax hikes for the wealthiest Americans has taken center stage in a political battle over the so-called “fiscal cliff” that could tip the country into an economic recession at the start of next year. Some of the largest corporations and advocacy groups are lobbying for wide-ranging cuts in government spending, including to programs like Medicare, Medicaid, Social Security. The group, which includes 80 of the country’s most powerful CEOs, is called the Campaign to Fix the Debt. It was co-founded by former Clinton White House Chief of Staff Erskine Bowles and former Republican Senator Alan Simpson. Bowles and Simpson previously co-chaired the bipartisan National Commission on Fiscal Responsibility and Reform under President Obama. Co-founder Erskine Bowles warned of the dangers of the growing national debt.

ERSKINE BOWLES: These deficits that we have today of over a trillion dollars a year, they are like a cancer. And over time, they are going to destroy our country from within.

AMY GOODMAN: But critics have accused the group of using the budget crisis to push for corporate tax cuts. The Institute for Policy Studies in Washington, D.C., is publishing a report today called “The CEO Campaign to 'Fix' the Debt: A Trojan Horse for Massive Corporate Tax Breaks.”

To talk more about the report, we’re joined by Sarah Anderson, a fellow at the Institute for Policy Studies.

AMY GOODMAN: What is happening today in Washington, D.C.?

SARAH ANDERSON: Yeah, well, when people aren’t talking about General Petraeus’s sex life today, they are talking about the big budget showdown. And one of the big players in this debate, as you said, is this campaign called Fix the Debt, more than 80 CEOs of America’s largest corporations. And they’re doing a massive media and lobbying blitz, portraying themselves as the reasonable ones, because they’re calling for both raising revenues and cutting spending. But if you look at the details of their tax plan, you see that they are really just a Trojan horse. They’re pushing for the same old tax breaks for corporations that they’ve been pushing for for about a decade.

And we looked at one of them, which is they want a permanent exemption from U.S. taxes for all of their foreign earnings. And we calculated that the companies in this campaign stand to gain a windfall of as much as $134 billion, if they get this corporate tax break through. And so, people should be very wary of this big ad campaign that they’re about to see in their newspapers across the country. This is just one more corporate attack on our fair taxation system.

AMY GOODMAN: Sarah, who exactly is involved in this Fix the Debt campaign? Who are these CEOs?

SARAH ANDERSON: Well, it’s many household names—General Electric, Honeywell, Boeing and so forth. And as we’ve been documenting at IPS, many of them are serial tax dodgers already. They’ve been using accounting shenanigans to shift profits to overseas tax havens to lower their tax bills. And in fact, one way that we illustrate this is we found that in 24 of these companies they actually paid their CEO more last year than they paid to Uncle Sam. So, they’ve been lowering their tax bills already. They want to continue doing that. And they’re just taking advantage of the so-called “fiscal cliff” crisis to push that ahead.

AMY GOODMAN: I want to turn to recent comments made by the Republican House Speaker John Boehner, who argued against any tax hikes as part of a deal to avoid the so-called “fiscal cliff.”

HOUSE SPEAKER JOHN BOEHNER: Instead of raising tax rates on the American people and accepting the damage it will do to our economy, let’s start to actually solve the problem. Let’s focus on tax reform that closes special-interest loopholes and lowers tax rates. Instead of accepting arbitrary cuts that will endanger our national defense, let’s get serious about shoring up the entitlement programs that are the primary drivers of our country’s massive, growing debt.

SARAH ANDERSON: It’s just crazy to be talking about, as he said, “shoring up the entitlement programs.” That’s just Washington speak for reducing the cost of these programs and limiting access. To think that we need to shift the burden onto the backs of the poor and elderly is crazy, when we’re in one of the richest countries—the richest country in the world. Our problem is that our resources have been misallocated. And the approach to the debt should be to look at the ways that we could raise revenues through fair taxation, including taxing financial transactions, which could rein in Wall Street; number two, environmental reforms like cutting fossil fuel subsidies and using carbon taxes; and three, cutting military spending, especially all these military bases we have around the world that are obsolete. That kind of combination could raise trillions of dollars over the next decade. And that’s how we should be addressing the debt, not through these, you know, tax shenanigans that are just about giving more breaks to corporations and the wealthy, and cuts to Social Security and Medicare.

AMY GOODMAN: And the organizing that’s going on around—for example, just the word “entitlements” that is continually used, it has become the way of describing Medicare, Social Security. Your thoughts?

SARAH ANDERSON: Yeah. Well, I’ve learned to instead call them call them “earned benefit programs,” because these are programs that American workers are paying into over their lives, and they have a right to that money, to have these basic social programs that have made us a much stronger society with a stronger middle class. And to think that people are trying to use this situation to cut into those earned benefit programs is just nuts, when there are so many other places where we could get the revenues needed to deal with the situation and also to shift our economy in a way that makes it more equitable, green and secure.

AMY GOODMAN: Well, Sarah Anderson, I want to thank you for being with us. We’ll certainly continue this conversation. President Obama meets with Richard Trumka and Mary Kay Henry of SEIU and AFL-CIO today. Thanks so much for joining us. We’ll link to your report. 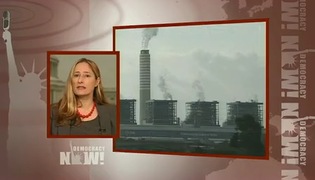