AMY GOODMAN: Paul Barrett, I wanted to move to the issue of gun control. Mayor Bloomberg also raised the issue of gun control in why he is supporting President Obama. He said, “In 2008, Obama ran as a pragmatic” — let’s see if I can find the quote here — he “ran as a pragmatic problem-solver and consensus-builder. But as president, he devoted little time and effort to developing and sustaining a coalition of centrists, which doomed hope for any real progress on illegal guns, immigration, tax reform, job creation and deficit reduction.” So, in fact, interestingly, he is somewhat critical of President Obama on gun control. And you are very well positioned to talk about this issue, as your last book, a New York Times best-selling book, is called Glock. Talk about this issue of gun control.

PAUL BARRETT: Yeah. Well, I mean, first, you accurately point out that the mayor’s endorsement of President Obama for re-election was a qualified endorsement. It was not an enthusiastic, across-the-board endorsement. He—the mayor said that he’s very disappointed, actually, in the president on a number of issues, but that, overall, he strongly favors him over Romney.

One of the issues in which he and a number of other people who are advocates of stiffer gun control are disappointed is the fact that President Obama, since he’s been in office, has really sat on his hands in connection with the debate having to do with the regulation of gun ownership and the marketing of guns in this country. And this, again, similar, I think, to the calculation on climate, is a political calculation. The president decided not to spend political capital fighting to stiffen federal regulation of guns. You can debate whether that was sensible politically or not sensible politically, but that was the calculation they made. The question is, is whether he will be listening more closely and be more prone to be influenced by people like Mike Bloomberg in a second term and would go to Congress with proposals to tighten up federal gun control. I can’t answer that question: I don’t know whether he will or not. But that’s clearly something that many liberals—and Bloomberg, on the gun issue, certainly is a liberal—have been very upset with the Obama administration for the last four years. And it’s an open question as to whether Obama would take the risk of taking on the NRA and taking on the very, very potent pro-gun forces that exist in Congress in a second—in a second term.

AMY GOODMAN: Paul, interestingly, as we talk about climate change not being raised in the three presidential debates by either moderator or the presidential candidates, it was somewhat similar with gun control. The Brady Campaign Against Gun Violence waged a campaign to get Jim Lehrer, right, the moderator of the first presidential debate at University of Denver, to ask a question about gun violence, because, of course, it was in Colorado. Aurora has just happened; of course, Columbine was there. Tens of thousands of people signed petitions to get him to ask, and he didn’t. The only time it was raised in the second debate was not because of a moderator, but because that was that town hall at Hofstra and a regular citizen asked the question.

PAUL BARRETT: Yeah, and I thought the answer to that question was—was very revealing. You noticed, if you go back and you look at that transcript, President Obama introduced his answer with a—basically a tribute to the Second Amendment, saying that, “Well, the first thing to say is that we have a Second Amendment,” which, of course, we do, “and we respect gun rights, which are enshrined in the Second Amendment.” We have a Supreme Court interpretation of the Second Amendment that protects the individual right to own guns and so forth. I thought it was very, very striking that on the Democratic side even, the emphasis was on gun rights, when the question was about stiffer regulation of gun ownership. This is an illustration of how much the debate over guns has tilted in favor of the gun rights position. We’ve really had a huge move over the last 10, 12 years in this country from a position where gun control was something that was actively debated in Congress to a situation where even raising the topic is seen as too risky by Democrats. Now, of course, Romney said, just flatly across the board, “I won’t even talk about it. I won’t even consider it,” that we have absolutely no need to think about the regulation of guns. So, there—you know, there’s a difference in the candidates; it’s not like they have the same attitude. But it is significant that Obama seemed to send a signal that this was still not going to be a priority.

AMY GOODMAN: Paul Barrett, I want to thank you for being with us, assistant managing editor at Bloomberg Businessweek_. His cover story is called “It’s Global Warming, Stupid.” And we will link to that at democracynow.org. As well, you can read my change”>weekly column at democracynow.org. It says “We Are Not Powerless to Confront Climate Change.” This is Democracy Now!, democracynow.org, The War and Peace Report. When we come back, the relief efforts. We go to Chinatown. Stay with us. 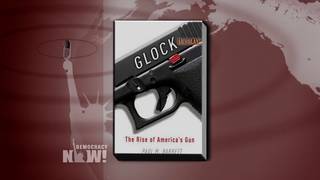