Another area of New York City hit hard by Superstorm Sandy is Chinatown in the southeastern section of Manhattan, where many businesses remain shuttered and residents are still without power, some of them stranded on high floors of apartment buildings. The group CAAAV: Organizing Asian Communities has been leading a relief effort, with volunteers distributing supplies and canvassing buildings. Hundreds of people lined up Thursday to receive sandwiches, rice, water, batteries and other forms of assistance. We get a report from Democracy Now!'s Amy Littlefield, who interviews residents, and we speak with Helena Wong, executive director of CAAAV: Organizing Asian Communities, about the storm's impact as well as issues of gentrification in Chinatown. [includes rush transcript]

AMY GOODMAN: This is Democracy Now!, democracynow.org, The War and Peace Report. I’m Amy Goodman. We are broadcasting both from New York City and from Nine Network, My9, which is Missouri public television in St. Louis.

Well, another area of New York City hit hard by the aftereffects of Superstorm Sandy is Chinatown in the southeastern section of Manhattan, where many businesses remain shuttered Thursday. Residents were still without power, some of them stranded on high floors of apartment buildings.

The group CAAAV: Organizing Asian Communities has been leading a relief effort, with volunteers distributing supplies, canvassing buildings. On Thursday, activists and volunteers handed out sandwiches, crackers, rice, water, batteries and other aid to hundreds of people outside the group’s office.

In a few minutes, we’ll be joined by CAAAV’s executive director, Helena Wong. But first, Democracy Now!’s Amy Littlefield was there Thursday and filed this report.

AMY LITTLEFIELD: This is Democracy Now!'s Amy Littlefield with Martyna Starosta. We're here in Chinatown, where, as you can see, there are people lined up around the block trying to get food, supplies and information. They’ve been hit here hard by Superstorm Sandy. And we’re going to talk with an organizer who’s been here trying to help people out.

VOLUNTEER: Other buildings, we had no access, because their air-con systems are disabled…

HELENA WONG: My name is Helena Wong. I’m the executive director of CAAAV: Organizing Asian Communities. And we are standing here today in front of our office on Hester Street in Chinatown, where we’ve been providing relief and information for people who have been impacted by Hurricane Sandy in Chinatown and the Lower East Side.

ISMAEL MENDEZ: My name is Ismael Mendez. I was on the bus heading to 125th and Lex, when somebody told me they were giving out food down here. So I figured I’d come back around. And when I got here, I got what I needed, and I told them I’ll volunteer for work. So, I did three tours in one day, climbing buildings all the way to the 28th floor and taking food to the older people that cannot do it on their own.

LAM SHU: My name is Lam Shu. Sometimes stuck, everything now, with every day, with a couple times from the first floor walk up to the 20th floor.

AMY LITTLEFIELD: You have to walk up to the 20th floor?

LAM SHU: Mm-hmm, yes, yes. Before, I feel terrible. But then now, a couple of days higher, I already accustomed to. I like this exercise.

WENYAN CEN: Simon Cen. [translated] Yeah, so he was just saying , well, you know, just you really need to get communication and electricity, and there’s no, like, water, even. And it’s just really hard to get through, you know, your daily—or just get through, day by day.

FENG BAO ZHEN: [translated] My name is Feng Bao Zhen. And because my building, there’s no water and electricity in my building, so that’s why we’ve been just like walking around trying to look for supplies. And that’s why we’re here today.

AMY GOODMAN: That last voice, Helena Wong, executive director of CAAAV: Organizing Asian Communities, who joins us now. But first, I want to take a moment to thank a former Democracy Now! fellow ManSee Kong and CAAAV volunteer KahEan Chang, who both provided translation for that report.

CAAAV’s Helena Wong joining us in New York City to talk more about the relief effort and the impact of Superstorm Sandy on Chinatown. I’m glad we could get you into a studio in New York that’s above the line where there’s no electricity, because just 20 blocks from where you are is Democracy Now!'s studios. Of course, we're still in blackout mode, no electricity there.

Helena, talk about Chinatown right now, what it is you’re doing. And can you make some comparisons to how Organizing Asian Communities, how CAAAV worked after 9/11, the devastation, because Chinatown was right near where the World Trade tower was, the buildings that were taken down September 11th?

HELENA WONG: Sure. Hi, Amy. Thank you for having us, having me.

It’s been pretty crazy. I went down to Chinatown on Tuesday right after the storm, and there was nobody on the streets. Everybody was still in their apartments and in their homes. And when I was visiting our members, they were all saying that they had no information. And that’s when we realized that this was going to be major crisis for folks, because we knew that a lot of the attention was on Wall Street, it was on other parts of New York City. And we knew that there was nothing that was getting translated. I had been glued NY1 and other news channels and Facebook. So—so, I was pretty—I felt like I had information. But then, when I went down, it was clear that nobody had any information, and that was the biggest thing. People had enough food for a couple of days. They didn’t know how long the electricity was going to be out for. They didn’t know when the trains were going to come back on, whether there was school.

And so, then on Wednesday, we began to provide relief efforts. And up until yesterday afternoon, that’s when we heard about our city elected officials, leadership and FEMA coming into the community. And we’re thankful that they’re there now, but it’s been a few days, and people have come to us really hungry, really hungry for information also, and just starving for more—for more contact.

Post-September 11th, it was a lot of the same thing, except Chinatown was barely livable then, as well. And again, not a lot of information then. There were also a lot of health impacts that people didn’t even know about at the time. And we’re seeing that when—and actually, after September 11th, I remember seeing military tanks in the street, but nobody giving out information about where people should go, what people should do. And it’s a lot of the same thing happening now.

AMY GOODMAN: You gave out aid to, what, more than 700 people so far, charging more than 200 cellphones. And charging phones, that’s not just a minor issue; it’s people’s only form of communication, of link to the outside world, in quite dangerous times right now.

HELENA WONG: That’s correct. So we charged over a hundred—we charged about a hundred phones the first day. We charged over 200 phones yesterday. Today, if we get the generators that are promised us, we can probably charge about 500 phones. And we’re only charging them for about 20 minutes each, so they’re not getting charged a whole lot. And actually, a lot of Chinatown still doesn’t have cellular access, but people feel like that’s the only way that they can get connected. And they can actually walk to areas where there is a little bit of Wi-Fi access and texting. And so, it’s been—we’ve had lines around the block just for that, and we’ve turned so many people away, because it’s such a need right now to just feel connected and to feel like people are going to get information. They know that their loved ones are OK; their loved ones know that they’re OK.

AMY GOODMAN: Very quickly, the issue of gentrification, how does it affect what you’re trying to do right now?

HELENA WONG: So, the issue of gentrification has been going on in New York City for a really long time. And it’s really about who is the city for? And what we’re seeing is—what we’ve been experiencing for a long time is that a lot of communities of color are getting displaced, and it’s really clear that in rebuilding efforts, in this case, that the focus is going to be on getting areas that are wealthier up first. And the kind of economic engine of the city will be prioritized over people. It’s really sad to see that that’s the priority of the leadership of the city.

AMY GOODMAN: Well, I want to thank you, Helena, for joining us. Helena Wong is the executive director of CAAAV: Organizing Asian Communities. She is organizing now in Chinatown, which is right next to Wall Street and, we should say, the New York Stock Exchange—electricity did go on.

Well, we want to encourage people to join us on Tuesday night for election night special. You can go to our website at democracynow.org for details, from 7:00 Eastern Standard Time to 1:00 in the morning. All radio and television stations can run us.

And we are continuing to make our way back to New York. Tonight we’ll be in Houston, Texas, at 7:00 at the [Emerson] Unitarian Universalist Church. And then on Monday night, if electricity is restored in New York City, we’ll be at Barnes & Noble at 6:00, the one in Tribeca at 97 Warren Street. 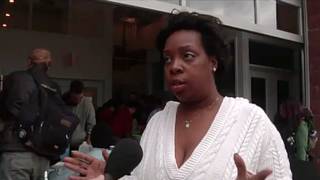