Spain’s most famous judge, Baltasar Garzón, has been disbarred for 11 years after being found guilty of ordering illegal monitoring. Garzón is known for taking on global human rights cases under the doctrine of universal jurisdiction, with actions including ordering the arrest of former Chilean dictator Augusto Pinochet in 1998, indicting Osama bin Laden for the 9/11 attacks, and probing the abuse of U.S. prisoners at Guantánamo Bay. Garzón cannot appeal his disbarment, which effectively ends his career as a judge. We speak to Human Rights Watch’s Reed Brody, who observed Garzón’s trial in Madrid. Brody says the case marks “a massive attack on the independence of the judiciary and on a very brave judge.” [includes rush transcript]

StoryFeb 01, 2012Baltasar Garzón, Trailblazing Judge Who Pursued War Criminals, Faces Trial of His Own in Spain

JUAN GONZALEZ: Spain’s most famous judge, Baltasar Garzón, known for ordering the arrest of Chilean dictator Augusto Pinochet, was himself found guilty yesterday of authorizing illegal recordings between clients and their lawyers in a corruption case involving the Prime Minister Mariano Rajoy’s People’s Party. Spain’s Supreme Court has banned Garzón from the legal profession for 11 years, effectively ending his career as a judge. The court also said he could not appeal the ruling.

Some Madrid residents expressed disappointment at the outcome of the case.

PATRICIA: [translated] I think Garzón has done the best he can, and what he did, I think, is right. He didn’t do anything wrong. And whether he did or he didn’t, he is the only one to have ever done something for this country. So I think the decision is incorrect.

AMY GOODMAN: In addition to ordering Pinochet’s arrest, Judge Garzón used the doctrine of universal jurisdiction to investigate war crimes and torture across national lines, famously indicting Osama bin Laden and others of al-Qaeda in 2003, and opening an investigation into the potential criminal liability of Bush administration officials for acts of torture at Guantánamo.

Garzón still has two other cases pending against him, including allegedly exceeding his authority by investigating atrocities committed by supporters of the dictator Francisco Franco. The human rights crimes came during Franco’s reign from ’36 to 1975. More than 100,000 opponents of the regime were executed or disappeared. While prosecutors reportedly disagreed with the charges that Garzón had exceeded his authority, Spanish law allows civilians to lodge criminal charges.

Well, to talk more about the ruling against Judge Garzón, we’re joined by Reed Brody, counsel and spokesperson for Human Rights Watch in Brussels. He was observing Garzón’s trial in Madrid, is now with us in New York.

Can you just tell us what happened?

REED BRODY: Sure. Well, as you said, there were three cases against Garzón. I mean, this was a concerted effort by his enemies within the conservative Spanish judiciary essentially to get rid of him. And the first case, accusing him of failing to apply Spain’s amnesty law, got such a bad reaction internationally, but other cases were leapfrogged in front of that.

And in this case, he ordered that the alleged ringleaders of a massive corruption scandal—over 120 million euros, $180 million, involving payoffs within the now-ruling Popular Party—he ordered that the defendants be wiretapped, because, allegedly, the lawyers, who were in conversation with them, were laundering the money. And in fact, one of the lawyers was actually indicted for money laundering. He ordered the wiretaps on the recommendation of a prosecutor. When the case was moved to another jurisdiction, the new prosecutor recommended the wiretaps, and the new judge continued the wiretaps. And despite the fact that one of the lawyers was in fact indicted for laundering the proceeds of this scandal, the wiretaps were quashed. That’s OK. What then happened, though, is that he was actually prosecuted by the defendants. And the conservative judiciary accepted the case, and he has now been convicted of having abused his authority by ordering these wiretaps.

JUAN GONZALEZ: Well, I mean, it almost seems that as long as he was willing to deal with cases internationally, that it was OK by the Spanish judiciary. But as soon as he began to look at the Franco regime, the atrocities of the Franco regime, or begin to zero in on possible corruption within his own government, suddenly they went out to get him.

REED BRODY: Well, he has made a lot of enemies, particularly in the Popular Party. But also, let’s not forget that he had—his actions resulted in the indictment of a Socialist Interior Ministry for supporting death squads in the Basque country. So he had made enemies on both sides of the spectrum. And this was really a concerted effort to cut him down to size, which—a massive attack on the independence of the judiciary and on a very brave judge.

AMY GOODMAN: So what can’t he do right now? And we have less than a minute.

REED BRODY: Well, he can’t serve as a judge in Spain. And this is really—for him, that’s not—it’s not he who will suffer. It’s Spain. It’s all of those of us who look to the Spanish judiciary to take on the tough cases, to investigate Guantánamo, the Salvadoran and Argentinian and Chilean victims who went to the Spanish judiciary because there was a judge there willing to apply the law. And now that judge is being—

Baltasar Garzón, Trailblazing Judge Who Pursued War Criminals, Faces Trial of His Own in Spain 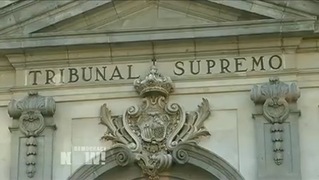 Baltasar Garzón, Trailblazing Judge Who Pursued War Criminals, Faces Trial of His Own in Spain