More than 350 inmates were killed this week when a fire swept through an overcrowded prison in Honduras. It was the world’s deadliest prison fire in a century. Most of the prisoners who died had never been charged, let alone convicted. Honduras is plagued with judicial corruption, rampant drug trafficking, and the highest murder rate in the world, which critics say has worsened since the 2009 coup that overthrew Manuel Zelaya. We’re joined by Dana Frank, professor of history at the University of California, Santa Cruz, and Honduras correspondent for The Nation magazine. “This was not a natural disaster,” Frank says. “There were two previous prison fires like this in 2003 and 2004… There have been reports saying that this should have been cleaned up long ago.” [includes rush transcript]

JUAN GONZALEZ: We turn now to Honduras, where a fire swept through an overcrowded prison Tuesday night and killed more than 350 inmates. It’s the world’s deadliest prison fire in a century. According to the Associated Press, most of the inmates who died had never been charged, let alone convicted. More than half were either awaiting trial or being held as suspected gang members.

A local official says an inmate called her moments before the fire and told her he was going to set the facility on fire and kill everyone inside. Many of the prisoners burned to death in their cells. Red Cross volunteer José Manuel Gómez described the scene.

JOSÉ MANUEL GÓMEZ: [translated] It’s a traumatic and horrible. We saw a completely charred body, and we are placing them into bags in parts, because when we grab them, they disintegrate. It’s shocking.

JUAN GONZALEZ: More than a third of the inmates held in the Comayagua prison died. As news of the fire spread, hundreds of relatives rushed the gates outside the burned-out prison, demanding updates about the fate of their loved ones. Meanwhile, Honduran President Porfirio Lobo announced measures to help the families of the victims.

PRESIDENT PORFIRIO LOBO: [translated] Members of the army are installing tents for the mourning families and relatives so they can grieve, like we are doing in the capital, also so they can receive medical attention and food. Furthermore, there will be a revision of the conditions in all jails to see how we can improve.

AMY GOODMAN: Honduran prisons are plagued with overcrowding, due in part to drug trafficking arrests. The United Nations says Honduras also has the highest murder rate in the world. All this comes as the country recovers from a 2009 coup.

For more, we’re joined by Dana Frank, professor of history at University of California, Santa Cruz, and Honduras correspondent for The Nation magazine. Her most recent piece appears in the New York Times; it’s called “In Honduras, a Mess Made in the U.S.”

What happened here? What do you understand, Professor Frank?

DANA FRANK: Well, let’s be clear right off: this was not a natural disaster. There were two previous prison fires like this in 2003 and 2004, when people died because the police either deliberately set the fire to kill gang—alleged gang members or because they allowed it to happen because of overcrowding. There have been reports saying that this should have been cleaned up long ago, and it’s just gotten worse and worse.

The other thing to understand is, when the fire broke out, the prisoners were locked down. There are many, many, now, testimonies from prisoners who managed to survive, saying that the police—the police, they’re guards. And I want to understand that these—underscore that these are regular police that manage the prisons; they’re not prison guards in a separate system. The prisoners that escaped are saying—or that survived, are saying that the police threw away the keys, they laughed at them, they refused to open the cells. And one prisoner is saying that they shot at the prisoners. And when the prison—and so, these people died because they died in their cells screaming, trying to get out, locked down in their cells. And human rights advocates are underscoring that penitentiary officials have a sacred duty to protect the lives of those inside.

JUAN GONZALEZ: And Dana Frank, there were some reports that firefighters were delayed in being able to get to the fire to put it out?

DANA FRANK: Absolutely. The police wouldn’t let the firefighters into the prison for 30 minutes. They also tear-gassed and fired at family members who were rushing to the prison to try to figure out what was happening. And there were also the firefighters 15 minutes away at the U.S. Air Force base, at Soto Cano, that were also not there.

AMY GOODMAN: Hundreds of prisoners killed. Can you talk about the relationship between the Honduran government and the United States and where you think that weighs in here?

DANA FRANK: Well, you know, but this is the ongoing coup regime. It’s really important to not act like the coup that happened on June 28th, 2009, is somehow over. The same people are controlling the Honduran government. Pepe Lobo has appointed, for example, Daniel Orellana, the head of the prisons, was one of the—the chief of the police at the time of the coup.

And all of this is being supported by the Obama government. You know, the Obama administration has, in fact, just in its budget two days ago, asked for a doubling of the U.S. military aid to Honduras. They’ve just spent $50 million to expand Soto Cano Air Force Base, as this—knowing full well about the total corruption of the ongoing Lobo government. And this is a really—a tremendously outrageous thing that the Obama administration is doing, and people need to be paying more attention to this.

JUAN GONZALEZ: And Dana Frank, the impact of the spreading U.S. war on drugs on—especially on Central America, as thousands of inmates from U.S. prisons are released from prison, deported down there, the growth of crime and drugs, and then the government crackdowns on drugs in those countries?

DANA FRANK: Well, you know, human rights defenders in Honduras will be the first to say that the drug problem is very serious, and it’s growing. They would also be the first to say that it’s mushroomed since the coup, in this context on complete impunity. There’s no functioning judicial system. And it’s important to understand that the Lobo government is completely in bed with the drug traffickers. So you can’t say here’s the government helping clean up the drug traffickers, and here’s the drug traffickers; it’s all corrupt from top to bottom. And the Honduran police and judicial systems are especially—are especially corrupt.

The problem is, there’s been a lot of spin saying, “Well, we have to spend even more money on the Honduran military and police in order to fight drugs.” And that’s just throwing money at the same problem, because you can’t make a distinction between the Lobo government and its police and the drug trafficking. And this is the issue all over Central America, this militarization in the name of fighting drugs, which is not what the Honduran human rights people, it’s not what the Honduran opposition is calling for. They are the first to suffer from the drug issues. But they say that this corrupt government, very highly backed and increasingly backed by the Lobo administration in the United—excuse me, the Obama administration in the United States, is the problem here. And so, it’s really important to not let this spin to the right to increase militarization of Central America in the name of fighting drugs or cleaning this up.

AMY GOODMAN: Dana Frank, the piece you wrote in the New York Times called “In Honduras, a Mess Made in the U.S.,” you got a lot of flak for that.

DANA FRANK: Well, you know, you know that you’ve hit a button when the State Department marshals two ambassadors to attack you, both the current Honduran ambassador to the United States, whose statement is, you can—word for word right out of State Department press releases, and they also rounded up a former Honduran ambassador—U.S. ambassador to Honduras. Those articles were placed in Honduran newspapers, deliberately attacking me. And, you know, it’s obviously a very serious pushback, because it’s very threatening for someone to actually make it in the New York Times, believe it or not, saying that there was a coup, saying that the U.S. backed the coup, saying that the election that put Lobo into office was fraudulent, and saying that there’s ongoing state-sponsored repression in Honduras, all of it funded and backed by the United States.

AMY GOODMAN: What do you think should happen now? We only have 30 seconds. But what do you think, as a U.S. citizen, your own government should be doing in relation to Honduras?

AMY GOODMAN: Well, we want to thank you very much for being with us.

DANA FRANK: Thanks so much for having me.

AMY GOODMAN: Dana Frank, professor of history at the University of California, Santa Cruz, and Honduras correspondent for The Nation. Her latest piece is in the New York Times, called “In Honduras, a Mess Made in the U.S.” 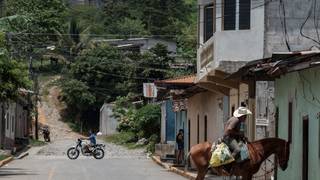