Chicago has announced an agreement to close two of the nation’s oldest and dirtiest coal plants. For more than a decade, residents near the Fisk and Crawford coal-fired power plants have complained of the pollution, saying the mercury and carcinogenic particulate matter aggravates asthma and potentially other illnesses. “In my community, the people were afraid,” says Leila Mendez, who lives near the Fisk coal plant and first got involved in community activism after experiencing health ailments. “They felt they didn’t have a voice. But we proved that we do have a voice, when we unite.” Plans to close the two facilities follow the passage in December of stricter federal Mercury and Air Toxics Standards regulations, which give the facilities up to four years to clean up or close down and have led other companies to opt to shutter their power plants. [includes rush transcript]

JUAN GONZALEZ: We stay now in Chicago, where the city has announced an agreement to close two of the nation’s oldest and dirtiest coal plants. For more than a decade, residents near the Fisk and Crawford coal plants have complained of pollution and health ailments, saying the mercury and particulate matter from the plant aggravates asthma and spews carcinogens into the air. This is Dorian Breuer of the Pilsen Environmental Rights and Reform Organization.

DORIAN BREUER: This has been a long fight to get the pollution from these plants to stop polluting local residents. Things like particulate matter, in particular, falls right near residents. And particulate matter is the soot that gets past all the defenses the body has, goes straight into the lungs.

JUAN GONZALEZ: The Fisk coal plant is scheduled to close later this year, and the Crawford plant will close by 2014. The city is working out details with Midwest Generation, the company that purchased the coal plants from Con Ed more than a decade ago.

AMY GOODMAN: Under a 2006 deal with state regulators that was prompted by a Chicago Tribune investigation, Midwest Generation had agreed to clean up or shut down the Chicago coal plants by 2018. But environmental activists joined with residents and Chicago officials to close them sooner, arguing heart- and lung-damaging pollutants from the plants disproportionately affect low-income and Latino neighborhoods. In exchange for the coal plants’ closure, community groups have agreed to drop their lawsuit against Midwest Generation.

The company did not respond to our request for comment. But we’re going right now to Leila Mendez. She lives near the Fisk coal plant in Chicago, first got involved in community activism after experiencing health ailments. She’s a member of the Pilsen Environmental Rights and Reform Organization.

Leila, welcome to Democracy Now! What first got you involved and concerned about the coal plant that is now closing?

LEILA MENDEZ: Well, thank you for having me.

In 1998, I discovered a lump in my left breast, and I immediately went to Northwestern Memorial Hospital, and I was diagnosed and treated for a Phyllodes tumor, which is a very rare and aggressive tumor. If I had waited, like the doctors had advised me to, six months to watch it, I would not be sitting here right now. The tumor is—it was rare and aggressive. And I did not fit the profile of—for this type of tumor. And so, I started—I began my journey to find an answer as to why this happened to me. And I came to the conclusion that it must have been environmental, but I couldn’t figure out what in my environment had caused this, could have caused this.

So, one day, a few years after that, I was told of an organization that was being—that was meeting in Pilsen. And so, I went to my first meeting with PERRO. And as I sat there listening to their reports about the contaminants, the pollutants, the—what was being spewed out of the Fisk plant, I was convinced that the tumor, my tumor, had been caused by this Fisk plant. And I then decided to join in the fight with PERRO to get them shut down, so that no one else would suffer from this.

JUAN GONZALEZ: And the amazing coalition that came together to—and achieved this victory, how was it able to do so?

LEILA MENDEZ: Well, PERRO has been fighting this for at least 10 years, and we were a small group of people, but dedicated people. The writer from the Chicago Tribune started writing our story, Michael Hawthorne. Carol Marin was the first one to write our story and put it on the air in the news. And so, word started spreading. Then Greenpeace International got involved with us. The Sierra Club and then the Clean Air Coalition and more and more people from the community started getting involved, and our voice started to be heard.

LEILA MENDEZ: And so that’s—yes?

AMY GOODMAN: Chicago Mayor Rahm Emanuel threatened to put his political muscle behind a long-stalled Clean Power Ordinance that would have given the Crawford and Fisk power plants a longer timetable to either clean up or shut down. Let’s go to a clip of Mayor Emanuel explaining his stance on the coal plants, then get your assessment of his leadership on this issue.

MAYOR RAHM EMANUEL: Long before I was mayor, they’ve been trying to get in here. And I would highly—while each alderman has to make their own decision, I would highly recommend, if a company is not following the rules as set up by the city council, I wouldn’t be cooperating with them.

LEILA MENDEZ: Well, I’m happy that Rahm Emanuel has decided to make the decision for—to convince the coal plants to shut down or clean up, and I thank him for that. That’s all I have to say about that.

AMY GOODMAN: Why are you sighing?

LEILA MENDEZ: Because I don’t agree with a lot of the things that Mayor Emanuel is doing, so—

AMY GOODMAN: Do you feel that this—his position right now has come about because of the pressure that this coalition of groups that you’re a part of has brought, and also the power of the media, when it gives voice to people and grassroots movements working on an issue like this?

LEILA MENDEZ: Yes, I believe it was a combination of the grassroots organizations and the media and the community members getting together. I believe that’s when the politicians realized, “Hey, we better listen. We better stop,” if I may say so, “thinking about profits and start thinking about the people.” So, I’ve always said it was a matter of profit above people. I always said that this company was going to shut down sooner or later, because they were not going to want to invest the money that was needed to clean up. So what it all came down to, it was economics, again, and they realized they didn’t want to see our faces anymore. We had vigils in the winter, vigils in the heat. We were, I guess—it all worked together. It all came together when we all became united. When we all united, it all worked, it all clicked, and it finally happened.

In September, I was one of the members that went out to Los Angeles to present to Midwest Generation the—or Edison International, the petitions that we collected. And they wouldn’t even allow us in the building, for security reasons. They were concerned for the safety of their employees. But I remember telling them, you know, “I want this plant shut down by the end of this year. People must stop dying.”

And right now I’m a little bit shaking because I am just overcome with emotion. I am so happy that the people united, and their voice was heard. In my community, the people were afraid. They felt they didn’t have a voice. But we proved that we do have a voice, when we unite. And I’m thankful to the media. The media was fantastic. The media was great in helping us. You calling us and getting the word out, I am just so thankful, because the fight is not over yet. This is just the beginning.

AMY GOODMAN: Leila Mendez, I want to thank you for being with us, and we will continue to follow what you are doing in Chicago and what environmentalists are doing around the country and the world. Leila Mendez, member of PERRO, Pilsen Environmental Rights and Reform Organization, lives near the Fisk coal plant in Chicago, first got involved in community activism after she found a lump in her breast.

This is Democracy Now! When we come back, David Cay Johnston joins us, the Pulitzer Prize-winning journalist. He’ll talk about Mitt Romney’s tax plan. Who wins? Who loses? Stay with us. 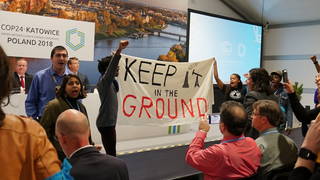