“Pakistan on the Brink”: Ahmed Rashid on Perilous Ties Between the U.S., Pakistan and Afghanistan

Top U.S. and Pakistani military officials meet today in Islamabad for the first high-level talks since NATO air strikes killed two dozen Pakistani soldiers last November. The meeting comes one day after President Obama met with Pakistani Prime Minister Yousaf Raza Gilani. Relations between the two countries have soured over the clandestine U.S. raid that killed Osama bin Laden, an increase in drone attacks, the killing of two Pakistanis by CIA contractor Raymond Davis, and the November attack. We speak with Ahmed Rashid, a veteran Pakistani journalist based in Lahore, about his new book “Pakistan on the Brink: The Future of America, Pakistan, and Afghanistan.” [includes rush transcript]

The meeting follows on the heels of President Barack Obama and Pakistani Prime Minister Yousaf Raza Gilani meeting yesterday on the sidelines of a nuclear summit in the South Korean capital, Seoul. It was the highest-level exchange between the two countries since the killing of Osama bin Laden in a clandestine U.S. raid in Pakistan last May. President Obama told Prime Minister Gilani he hoped a Pakistani parliamentary review of strained relations with Washington would be balanced and would respect U.S. security needs.

PRESIDENT BARACK OBAMA: I want to express my appreciation to Prime Minister Gilani for the work that he’s done in trying to strengthen the relationship between our two countries. There have been times—I think we should be frank—over the last several months where those relations have experienced strains. But I welcome the fact that the parliament in Pakistan is reviewing, after some extensive study, the nature of this relationship.

NERMEEN SHAIKH: Hours after the meeting, hundreds of activists belonging to various Islamist parties demonstrated in Islamabad to protest the government’s decision to hold a parliamentary review of relations with the U.S. This is the head of Jamaat-e-Islami, Munawar Hasan.

MUNAWAR HASAN: [translated] If there is talk of reviewing policy with America, if there is talk of reassessment, then the first issue to be tackled is that of the war on terror. We give logistic support to America in the so-called war against terrorism. We give them sensitive airports to use. We give them permission for drone attacks. We carried out military operations. We did everything possible in response to the “do more” demands. If a policy review has to take place, then the first thing to do is to get out of this war on terror.

AMY GOODMAN: In the past year, relations between Pakistan and the United States have soured following the raid that killed bin Laden, an increase in drone attacks, the killing of two Pakistanis by CIA contractor Raymond Davis, and a U.S. air strike last November that killed 24 Pakistani soldiers. Pakistan subsequently cut NATO supply lines into Afghanistan.

To talk more about U.S.-Pakistan relations, we’re joined by Ahmed Rashid, veteran Pakistani journalist based in Lahore. He writes for a number of U.S. and international papers, author of a number of books. His most recent is called Pakistan on the Brink: The Future of America, Pakistan, and Afghanistan.

AHMED RASHID: Well, you know, the effect has been devastating. There is no two ways about it. There have been three incidents in the last month involving U.S. troops and Afghan civilians, all, for the U.S. troops, you know, very negative actions that they took. As far as the Koran burning is concerned, there were widespread rioting in the country. More than a dozen people were killed. And in this particular sergeant’s killing of 17 people, there was enormous anger in the south, where the Taliban are very strong.

Now, President Karzai has had to make very inflammatory statements against the Americans, which has kind of really endangered that relationship also, because he has had to play to the gallery and to express his grief and all the rest of it to the Afghan families, which has led to calling the Americans “Satan” and “the devil” and things like that. So we are really in a very serious crisis now. I think the tensions between Karzai and the Americans, between Pakistan and the Americans—Pakistan being critical because Pakistan is housing all the Taliban leadership, with which the Americans want to talk and are talking, but not in Pakistan, in Qatar. So there’s—and, you know, there’s very little support in the region, from Iran, from China, from Russia, from Central Asia, for a long-term American presence beyond 2014, when the pullout is due. The Americans are saying, “We want to sign a strategic compact with Karzai to go up to at least 2020,” similar to what happened in Iraq. And of course the Iraqis finally said, “No, please leave, all of you. Go now.” And there are no American troops left behind in Iraq. Karzai, of course, is desperately keen to sign a pact with the Americans, but everybody else is against it—the Taliban, who he’s negotiating with, the regional countries, and a lot of the Afghans, who are turning vehemently anti-American.

NERMEEN SHAIKH: But apart from that, though, in response to these incidents that you have described, what concrete demands is the Karzai government making of the U.S.?

AHMED RASHID: Well, I mean, concretely, they’re demanding two things for—in order to sign the strategic compact. One is that the U.S. end night raids. These are U.S. special forces who go out at night to capture or kill so-called Taliban, but, you know, we don’t know who they are. And a lot of times it’s innocent civilians, you know, misguided intelligence, etc. Two thousand night raids have taken place in the last 12 months, so you can see the scope of that. And Karzai is saying that, you know, we want to end these night raids, and best, we hand them over to the Afghans, the Afghan special forces, to do. So that’s one, you know, major bone of contention.

The second is that, you know, he wants to deal with Pakistan. He wants Pakistan to give up on the Taliban leaders that it’s holding. And obviously, he wants the Americans to put pressure on that.

The third issue is the question of prisoners. There are thousands of prisoners being held by the Americans. Some—a few in Guantánamo are Afghans, but the majority in the main American base at Bagram. About 3,000 prisoners are being held there. He wants these prisoners to be turned over to the Afghan authorities immediately. Now, I think there, the Americans are right. I mean, they say that, you know, the Afghan authorities don’t have the capability, the means, to guard these prisoners—

AHMED RASHID: —or to look after them.

AMY GOODMAN: We’re going to continue this conversation offline and post it at democracynow.org in just a few hours. Our guest is Ahmed Rashid, veteran Pakistani journalist. His new book is called Pakistan on the Brink: The Future of America, Pakistan, and Afghanistan.

Part 2: Ahmed Rashid on U.S. Relations with Pakistan and Afghanistan, Drones, and Journalists in Danger 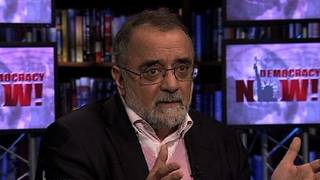 Part 2: Ahmed Rashid on U.S. Relations with Pakistan and Afghanistan, Drones, and Journalists in Danger