This week’s Truthdigger choice may seem like a no-brainer, and in many ways it is, as journalist and “Democracy Now!” host Amy Goodman has made a career out of exemplifying just those qualities we look for when picking our winners. Many of those attributes fall under the general heading of speaking truth to power, but in the specific case of journalists, Goodman’s determination to go after stories that are passed over by mainstream outlets—as well as some independent and progressive news sources—for various political and economic reasons makes her a standout among a shrinking group in her field who still make Fourth Estate ideals part of their everyday practice.

That said, Goodman got our attention particularly last week for her coverage of the crisis in Bahrain, which might readily have been pitched to American audiences as a story worthy of coverage as part of last year’s Arab Spring, with a familiar arc involving protesters rising up against a dictatorial regime, were it not for the United States’ specific military and business (read: oil) interests in the region. Bahraini demonstrators have been calling for change, and for international attention to be brought to the brutal crackdowns that government forces have enacted for months, but the lack of engagement from the monarchy’s Western allies, the U.S. in particular—and the lack of journalistic involvement by the media of those nations—has been conspicuous.

On Monday, Goodman and her news team made another effort to buck that unfortunate trend, taking up the increasingly critical cause of Bahraini activist Abdulhadi Alkhawaja, who was brutally arrested last year and given a life sentence for his part in anti-government protests and who started a hunger strike nearly two months ago. In the clip below from Monday’s “Democracy Now!” broadcast, Goodman speaks to Alkhawaja’s daughter and fellow activist, Zainab, as well as to Nabeel Rajab, president of the Bahrain Center for Human Rights, about Alkhawaja’s condition, how the U.S. government could help—“the Bahraini government listens to the American administration,” Zainab Alkhawaja notes—and why strategic interests have trumped human rights concerns when it comes to Bahraini protesters’ plight.

Watch our interview recent interview with May Ying Welsh, director of the award-winning documentary, “Bahrain: Shouting in the Dark,” which aired on Al Jazeera English and chronicles Bahrain’s pro-democracy uprising against U.S.-backed rule.

See all of Democracy Now’s reporting on Bahrain.

Read the full statement from Truthdig. 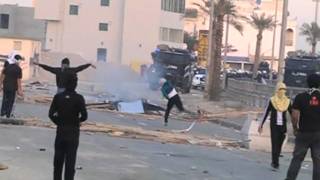