Democracy Now! correspondent Sharif Abdel Kouddous joins us to discuss his recent trip to Bahrain, where the Sunni monarchy continues its crackdown on a two-year-old uprising. Since February 2011, at least 87 people have died at the hands of U.S.-backed forces. While talks are taking place this week between the Bahraini government and opposition groups, several of Bahrain’s leading human rights defenders remain imprisoned. “Bahrain had the feeling of a country under occupation,” Kouddous says of his visit. “There was helmeted riot police in full armor wielding shotguns, tear gas, sound grenades, deployed around villages outside of the capital. There was helicopters buzzing overhead conducting surveillance. … Many people lament there, from the opposition movement, that they have been forsaken by the international community and forgotten by the world’s media for this uprising that doesn’t get a lot of attention.” [includes rush transcript]

JUAN GONZÁLEZ: We begin today’s show looking at the Gulf nation of Bahrain, a close U.S. ally and the home of the Navy’s Fifth Fleet. Tensions remain high in Bahrain after a teenager was killed last week on the second anniversary of pro-democracy protests. Since February 2011, at least 87 people have died at the hands of U.S.-backed security forces. While talks are taking place this week between the Bahraini government and opposition groups, several of that nation’s leading human rights defenders remain imprisoned.

AMY GOODMAN: Attorney Abdulhadi Alkhawaja, the co-founder of the Bahrain Center for Human Rights, is serving a life sentence. He has already been held for nearly two years. Nabeel Rajab, another prominent human rights defender, is serving a three-year sentence.

Democracy Now! correspondent and Nation Institute fellow Sharif Abdel Kouddous has just returned from Bahrain. His latest article, “Scenes from a Bahraini Burial,” will be published by The Nation today. He joins us from his home in Cairo, Egypt.

Welcome to Democracy Now!, Sharif. Talk about what you found in Bahrain. And how difficult was it to get in?

SHARIF ABDEL KOUDDOUS: Well, I actually was granted at the last moment a journalist visa to enter for three days. And so, I was there for the uprising, the anniversary of the uprising on February 14th.

And really, on that day and the days afterwards, Bahrain had the feeling of a country under occupation. There was helmeted riot police in full armor wielding shotguns, tear gas, sound grenades, deployed around villages outside of the capital. There was helicopters buzzing overhead conducting surveillance, police helicopters. There were checkpoints set up—and this is a feature of life in Bahrain—checkpoints along the major roads with security forces stopping motorists, checking IDs, sometimes keeping people for hours and harassing them. And meanwhile, inside the villages, there’s—clashes take place with police, young men and boys in T-shirt balaclavas throwing Molotov cocktails and stones at police and usually being attacked with shotguns and suffocating amounts of tear gas. You see many of these young men going towards the site of the Pearl Roundabout, that roundabout that was destroyed by the government in the early months of the uprising in 2011. And this is a recurring symbolic—symbolic act of resistance to reclaim the birthplace of the uprising. So, this was the scene on the ground in Bahrain.

And, of course, as you mentioned, on that day, a 16-year-old boy by the name of Hussain al-Jaziri was shot and killed by a police officer. I spoke to eyewitnesses who told me he was no more than three or four yards away from the police officer when he was killed. This has only fueled the unrest. And his funeral two days later was attended by thousands of people holding up pictures of him, a smiling picture of him, chanting things like “Down with Hamad,” the king of Bahrain, chanting things like “I’m the next martyr.” And this was despite police efforts to really cordon off the entire area. In the morning of that day, police had put roadblocks on all the major roads leading to a major area, to these two villages where the funeral march would take place. And really, there was an unforgettable scene as the march reached the graveyard and Hussain’s body was being lowered into the grave. Protesters continued going forward towards the Pearl Roundabout, where, you know, dozens of security forces were waiting for them. And there was tear gas being fired, and people were holding tissues and gas masks over their hands and mouth as this body was being lowered into the ground. And so, this is the kind of scene that is in Bahrain, and many people lament there, from the opposition movement, that they have been forsaken by the international community and forgotten by the world’s media for this uprising that doesn’t get a lot of attention in the media.

JUAN GONZÁLEZ: And, Sharif, you mentioned the tear gas that was fired. And in your article, you talk about the lethal use of tear gas throughout this democracy uprising by the forces, the government forces, in Bahrain. Could you expand on that?

SHARIF ABDEL KOUDDOUS: Right. Well, the police—and it must be mentioned that large ranks of the police are recruits from other countries, like Pakistan, Yemen and Jordan, and they’re referred to by protesters and opposition people as mercenaries. But the security forces, the government had been heavily criticized for their use of tear gas in Bahrain. People speak about it as an unavoidable hazard of everyday life. Physicians for Human Rights, the U.S.-based group, released a study last year that found that their use—the government’s use of tear gas was unprecedented in the world. People speak about how it’s shot into apartments, into cars. Women—pregnant women have had miscarriages because of this. People speak of different types of colored gas—yellow and blue and black. And so, this is the kind of repression and crackdown on dissent that we’re seeing.

And on the eve of the uprising, a woman by the name of Amina Sayed Mahdi, who was a 36-year-old cashier at a country mall, at a mall, died of a lung infection after a month-long stint in the hospital. She would go home every day to her village in Abu Saiba and have to be exposed to a lot of gas. There was a lot of clashes around her village. And she would often faint on the way home. The people who documented her case told me that she would vomit often. She had stomach problems and eventually developed a lung infection. Now, she did have pre-existing medical conditions, which complicated the case, but her family points to the government and blame [it] directly for the killing. And hundreds turned out for her funeral. And they lay the blame also and call her a martyr, saying she died at the hands of the government’s use of—lethal use of tear gas.

AMY GOODMAN: Sharif, can you talk about the announcement by the king, King Hamad bin Isa al-Khalifa, to begin talks with the political opposition, their significance, the monarchy a close ally of the United States government?

SHARIF ABDEL KOUDDOUS: Right, the king in late January called for a national dialogue to be held. The first session was held on February 10th. This was the first attempt at talks in over 18 months, since dialogue broke down in the summer of 2011. It involves six opposition groups, along with pro-government representatives and the government themselves, in these talks. The people—the al-Wefaq Society, which is the largest political opposition group, is calling for a constitutional monarchy, major reforms including an elected prime minister to replace the king’s uncle, who’s been in power as prime minister for an astounding 42 years.

There’s a lot of skepticism amongst many of the people I spoke to on the ground of the outcome of these talks, that speaks to a deep mistrust of the government, given the crackdown that we’ve seen on protesters and on human rights workers over these last two years. They say that none of the recommendations put forward in a government-commissioned inquiry that was released in November 2011, that was headed by Cherif Bassiouni, none of them have been implemented. They say that none of the—or none of the key ones have been implemented, rather. The same goes for a U.N. report released in September that had a host of recommendations. They say none of those have been implemented. And there’s a lot of skepticism and mistrust of the government. And so, we’ll have to see where these talks go forward, but the increased unrest that we’ve seen in the last week threatens to derail them.

AMY GOODMAN: Sharif, I want to thank you for being with us. Sharif Abdel Kouddous, Democracy Now! correspondent, fellow at The Nation Institute. His latest piece for The Nation is “Scenes from a Bahraini Burial.” It is published today, and we’ll link to it at democracynow.org. Sharif’s speaking to us overlooking Tahrir Square in Cairo, Egypt, where he lives. Back in a minute. 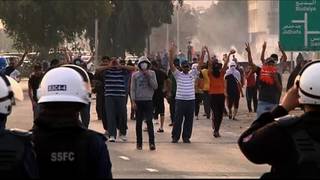