Lawmakers in Connecticut have given final approval to a measure that would repeal the state’s death penalty for future convictions. The bill now goes to Gov. Dannel Malloy, who’s pledged to sign it into law. Connecticut would become the fifth state in five years to abolish the death penalty and the 17th state overall, moving activists closer to the 26 states needed to bring a challenge to the Supreme Court. “This is our first victory since Troy [Davis] was executed,” says NAACP President Ben Jealous. “This is a hard-won bit of progress on the issue of human rights for our country.” [includes rush transcript]

AMY GOODMAN: Ben Jealous is staying with us, president and CEO of the NAACP. He was in Sanford, Florida, now in Hartford, Connecticut. Into the late hours last night, the state legislature voted to abolish the death penalty. Ben Jealous, can you talk about the significance of this?

BENJAMIN JEALOUS: This is huge. We have a governor who has said he will sign this law. The vote last night wasn’t even close; it was 86 to 62. And, you know, this is a—and this is a state—I mean, I’ve been up here five times in three years. Our folks have been working month after month for years. This is a state where we’ve come close before, but we haven’t been able to get it.

And you can attribute this to the upsurge in public support for ending the death penalty that the Troy Davis campaign created. The reality is, that campaign brought this issue to the consciousness of millions of people across this country, including tens of thousands, if not hundreds of thousands, in this state. And the new spirit of—the new spirit of fight, of courage, of commitment, to finally have our country break with its long past of putting people to death and join the rest of Western civilization—indeed, most countries in the world have long since cut bait with the death penalty—is finally starting to take hold. This is our first victory since Troy was executed. We see a future of winning in states like Maryland, maybe even California soon. And so, we’re excited. I mean, this is—it’s a tough issue. There’s tragedies, you know, all surrounding this issue. But this is a hard-won bit of progress on the issue of human rights for our country.

JUAN GONZALEZ: But, Ben Jealous, even in this victory, those who were supporting abolition of the death penalty had to make quite a few concessions in terms of the kind of punishment that people convicted of murder will receive. Can you talk about that?

BENJAMIN JEALOUS: Yeah. They actually beat back a ton of attempts to add really heinous things to this bill. There have been some concessions. The reality is that the people will live to fight another day, and I think many of those will be rolled back over time. But getting to this point where we can abolish the death penalty in the state is critical. And it’s a critical step, quite frankly, to getting to a point where we can abolish it in the country as a whole. We have to get, Juan, 26 states in order to have met the minimum threshold for going to the Supreme Court and arguing that the punishment is not only cruel, but also unusual, and therefore in violation of Eighth Amendment and can be outlawed. And that’s our only hope for abolishing it in Georgia, in Texas, in Mississippi, in states where, you know, quite frankly, there have been many Troy Davises over the decades, over the centuries, huge racial disparities, you know, exclusive focusing on the poor. And so, yes, this was a hard-won battle. There were some concessions made. But this is a huge victory for justice in this country. It moves us forward. And I have faith that if there’s anything that needs to be fixed going forward, we will be able to fix that, too.

AMY GOODMAN: So you have eight states to go, Ben Jealous? There are 17 states, five in five years, that have abolished the death penalty. What’s the next focus point, next state?

BENJAMIN JEALOUS: Well, this fall it will be on the ballot in California, and we are hopeful. You know, in California, we have both an attorney general and a governor who oppose the death penalty. And we hope that with their leadership of the state and with a big turnout in the fall, we will see the death penalty fall in California. Next year, we anticipate being able to do this in the state of Maryland. And we want to keep this pace up. I mean, in the last four years, we have averaged about a state per year, and that puts us within a decade of being able to get to the Supreme Court and finally outlaw this barbaric practice in this country.

AMY GOODMAN: It’s interesting, European countries are weighing in by forbidding the export—or the import into the United States, the export from their countries, of the lethal injection, the chemicals that are needed to execute a prisoner.

BENJAMIN JEALOUS: You know, the Pope is probably the most important person in Europe in ending the death penalty in this country and making it harder. The influence of the Catholic Church was—it’s very clear that the doctrine of life is inclusive of ending the death penalty, has played a huge role in setting a tone in Europe that’s been very conducive first to ending it there, and then making it harder for drugs to be sold here, for various technologies to be exchanged, to facilitate the death penalty here. So, yes, Europe’s role is important, and the Pope and the Catholic Church’s role is extremely important.

AMY GOODMAN: Finally, you mentioned Troy Davis. And you were down at his execution on September 21st in Jackson, Georgia. His sister, Martina Correia, said at his funeral that she would continue to fight to end the death penalty. She ultimately died a few weeks later of cancer, a battle she had been fighting all through the time she fought for Troy Davis’s life. I daresay, if she were alive, she would be sitting next to you there in Connecticut.

BENJAMIN JEALOUS: She would be. I was on the phone with her sister last night, who reminded me that their mother died one year ago today. That family had three tragedies in about six months. Troy’s execution happened in the middle of his mother and his sister dying. And the family is very engaged. And the activist family is very engaged. I was sitting there last night with people I met 15 years ago when I first met Martina, you know, who have worked steadily on this issue to revive this movement.

Quite frankly, you know, in 1996, the death penalty had been reinstated in this country for 20 years. The movement had lost every year. And we changed our strategy. We said, “We are going to go after the states. We’re going to take this apart state by state.” And in those past 15 years, we have abolished it for juveniles. We have abolished it for the category of people that the court refers to as “the mentally retarded.” We have abolished it in many states where people thought it was impossible. And now, as of last night, we’ve abolished it here in Connecticut. Again, the governor has been very clear for years, including in his campaign, that if he was presented with a bill, he would sign it. So the vote last night in the House seals the deal. You know, this is a great moment. And quite frankly, Martina’s spirit and Troy Davis’s spirit was very much with us last night. They have really given birth to a renewed anti-death-penalty movement in this country by their courage and their steadfastness right to the end of their lives.

AMY GOODMAN: Benjamin Jealous, we want to thank you very much for being with us, president and CEO of the NAACP, speaking to us from Hartford, Connecticut, where the state legislature—

AMY GOODMAN: —has just abolished the death penalty. The governor of Connecticut will sign that legislation soon.

This is Democracy Now! We’ll be back in 30 seconds to talk about the Stand Your Ground laws. A movement has been launched around the country to have them repealed. We’ll look at the movement, the organization, the corporate-funded group, that’s gotten them on the books in state after state. We’ll look at ALEC and speak with the head of ALEC Exposed. Stay with us. 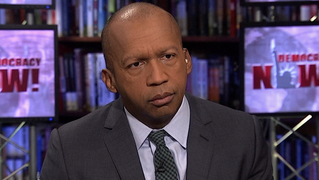