Journalist Anand Gopal has just returned from Syria, where he interviewed survivors of last week’s bloody battle for the town of Taftanaz in northern Syria. Reports say government forces continue to attack rebel strongholds in Homs, Hama and other cities in violation of a U.N.-backed ceasefire that took effect last week. “In every town and village, essentially the entire population was mobilized in support of the revolution,” Gopal says. “You had from little children to old people. Really, I’ve never seen anything like that before. And it showed to me the extent to which the revolution has a mass, democratic popular base, and Assad doesn’t.” [includes rush transcript]

StoryOct 27, 2016Bassam Haddad: We Have a Duty to Call for End to Killing in Syria & How We End It Matters

AMY GOODMAN: I wanted to switch gears to Syria. Anand Gopal has just returned from Syria on Tuesday, where he interviewed survivors of last week’s bloody battle for the town of Taftanaz in northern Syria. Reports say government forces continue to attack rebel strongholds in Homs, in Hama, other cities, in violation of a U.N.-backed ceasefire that took effect last week.

On Wednesday, U.S. Foreign Secretary—U.S. Secretary of State Hillary Clinton spoke at a meeting of NATO ministers in Brussels, saying the situation in Syria has become even more urgent after last week’s shelling of a refugee camp at the Turkish border. Clinton said additional measures would follow if President Bashar al-Assad does not stick to the ceasefire negotiated by ex-U.N Secretary-General Kofi Annan.

SECRETARY OF STATE HILLARY CLINTON: We are at a crucial turning point: either we succeed in pushing forward with Kofi Annan’s plan in accordance with the Security Council direction, with the help of monitors, steadily broadening and deepening a zone of non-conflict and peace, or we see Assad squandering his last chance before additional measures have to be considered. Now, we will continue to increase the pressure on Assad.

JUAN GONZALEZ: On Wednesday, Syrian security forces opened fire on anti-regime demonstrators surrounding the cars of a U.N. team in a suburb of Damascus. Hundreds of residents had mobbed the observers’ vehicles chanting against the government and in support of the Free Syrian Army insurgent group. The gunshots wounded at least eight demonstrators and prompted the panicked crowd to flee, according to activists and videos shot at the event. Earlier, representatives of the United Nations and the Syrian government moved toward reaching an agreement that would allow a full contingent of 250 observers to deploy in Syria to monitor a fragile ceasefire. Anand Gopal, talk about this and the latest developments in Syria.

ANAND GOPAL: Well, I was in Syria before the ceasefire and after. And initially, there was a decrease in violence. But what you saw after a few days is Assad’s regime firing at protesters, shelling neighborhoods, without provocation and indiscriminately, to the point where the ceasefire is almost meaningless now.

AMY GOODMAN: I wanted to play a clip for you. This is the Hezbollah leader Hassan Nasrallah’s recent comments on Syria. He appeared on Julian Assange, the founder of WikiLeaks, new program on RT called The World Tomorrow.

HASSAN NASRALLAH: [translated] From the beginning of the events in Syria, we’ve had constant contact with the Syrian leadership, and we’ve spoken as friends, giving each other advice about the importance of carrying out reforms. Right from the beginning, I personally found that President Assad was very willing to carry out radical and important reforms. And this used to reassure us regarding the positions that we took. At more than one occasion, publicly, I used to give speeches and say this, and say this exactly. And in my meetings with various Lebanese and Arab and other political leaders, I used to tell them the same thing, that I am confident that President Assad wants reform, and he will carry out reforms, realistic, genuine reforms. But the opposition has to agree to dialogue.

I’ll say more than this. This is the first time I say this. We contacted even elements of the opposition to encourage them and to facilitate the process of dialogue with the regime. But these parties rejected dialogue. And right from the beginning, we’ve had a regime that is willing to undergo reforms and prepared for dialogue. On the other side, you have an opposition which is not prepared for dialogue, and it’s not prepared to accept any—the reforms. All it wants is to bring down the regime.

ANAND GOPAL: That’s a bit disingenuous. I mean, of course the opposition does not want to negotiate with the regime, just as the Egyptian people didn’t want to negotiate with Mubarak. What the people of Syria are faced with right now is slaughter, and there’s no chance for negotiation. I mean, it’s either being killed or somehow overthrowing the regime. And I went from village to village and town to town in northern Syria and saw this for myself, where towns were completely flattened and people were massacred in a number of places. The issue of negotiations is a nonstarter.

JUAN GONZALEZ: And you also interviewed some of the insurgents and the rebel army. Your sense of their cohesiveness and their ability to maintain that struggle against the government?

ANAND GOPAL: Well, on the ground, the revolutionaries have actually set up pretty robust alternative governments. I mean, they’ve overthrown Assad. They’ve set up these systems of participatory government councils, where people are elected and they have the right to instant recall. I mean, it’s really something that I’ve never seen. And I was in Egypt, I was in Libya. I’ve never anything like it. And even after the Syrian army offensive over the last three weeks, which went in and flattened a whole bunch of towns and villages, they’re still intact, and they’re still running the show in a lot of these towns.

AMY GOODMAN: Talk about how you got in, what you expected to see, and then what you saw.

ANAND GOPAL: Well, I had a lot of questions about the nature of the insurgency in Syria. And, you know, of course, the U.S. and the West are supporting, at least in word supporting, the insurgency. So I was coming at it with a very skeptical and critical mind. We went over the border, basically crawling under a barbed-wire fence and hiking over mountains for a long period. But when I got into Syria, what I found was completely different from what I expected, in that in every town and village, it was essentially the entire population was mobilized in support of the revolution. I mean, you had from little children to old people. Really, I’ve never seen anything like that before. And it showed to me the extent to which the revolution had a—has a mass, democratic popular base, and Assad doesn’t.

AMY GOODMAN: And the effect of Kofi Annan, the special envoy for the Arab League and the United Nations, what he had proposed?

ANAND GOPAL: Well, he had proposed a ceasefire, which, as we mentioned, has really not been in practice. I mean, the regime is shelling towns indiscriminately.

AMY GOODMAN: What do you think? What are people calling for right now in Syria?

ANAND GOPAL: Well, people are—people are beyond calling for the overthrow of the regime. I mean, they’re in a desperate situation, so of course they’re calling for any kind of assistance they can get. And I understand and empathize, to an extent, with that. But some of the things they’re calling for, such as arming the revolutionaries would—I think would only spur Iran and Russia to arm the government, and perhaps lead to a pretty bloody proxy war. And we’ve been down that road before in Central America and in South Asia, so I think we have to be really cautious about that.

AMY GOODMAN: Well, Anand Gopal, we want to thank you very much for being with us, journalist who covers Afghanistan, Egypt; writing a book, actually, about the Afghanistan war; has just returned from Syria after a week there.

This is Democracy Now!, democracynow.org, The War and Peace Report. When we come back, we’ll be joined by Tavis Smiley and Professor Cornel West on The Rich and the Rest of Us. Stay with us.

Tavis Smiley & Cornel West on “The Rich and the Rest of Us: A Poverty Manifesto”

NEXTTavis Smiley & Cornel West on “The Rich and the Rest of Us: A Poverty Manifesto” 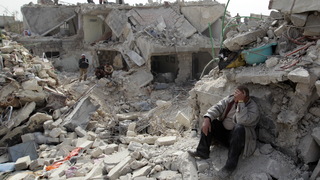 Bassam Haddad: We Have a Duty to Call for End to Killing in Syria & How We End It Matters