“My name is Kenneth Chamberlain. This is my sworn testimony. White Plains police are going to come in here and kill me.”

And that’s just what they did.

In the early hours of Saturday, Nov. 19, 2011, U.S. Marine veteran Kenneth Chamberlain Sr. accidentally hit his LifeAid medical-alert pendant, presumably while sleeping. The 68-year-old retired corrections officer had a heart condition, but wasn’t in need of help that dawn. Within two hours, the White Plains, N.Y., police department broke down his apartment door and shot him dead. Chamberlain was African-American. As with Trayvon Martin, the black teen recently killed in Florida, there are recordings of the events, recordings that include a racial slur directed at the victim.

The opening quote, above, was related to us by Kenneth Chamberlain Jr., when he appeared on the “Democracy Now!” news hour talking about the police killing of his father. Ken Jr. was holding on to the LifeAid pendant that his father wore around his neck in case of a medical emergency. Perhaps unbeknownst to the White Plains police who arrived at Ken Sr.’s door that morning, the LifeAid system includes a box in the home that, when activated, transmits audio to the LifeAid company, where it is recorded. Ken Jr. and his lawyers heard the recording in a meeting at the office of the Westchester County district attorney, Janet DiFiore.

Ken Jr. repeated what he heard his father say on the tape: “He says, ‘I’m a 68-year-old man with a heart condition. Why are you doing this to me?’ … You also hear him pleading with the officers again, over and over. And at one point, that’s when the expletive is used by one of the police officers.”

One of Chamberlain’s attorneys, Mayo Bartlett, told me about the racial slur. Bartlett is a former Westchester County prosecutor, so he knows the ropes. He was very explicit in recounting what he heard on the recording.

“Kenneth Chamberlain Sr. said to the police, ‘I’m a sick old man.’ One of the police officers replied, ‘We don’t give a f—k, n——-!’” (that last word rhymes with ‘trigger,’ which they would soon pull). The recording also includes a taunt from the police, as related by Bartlett, “Open the door, Kenny, you’re a grown-ass man!” It was when Ken Jr. related how the police mocked his father’s military service that he broke down. “He said, ‘Semper fi.” So they said, “Oh, you’re a Marine. Hoo-rah. Hoo-rah.” And this is somebody that served this country. Why would you even say that to him?” Ken Jr. wept as he held his father’s Marine ring and Veterans Administration card.

The LifeAid operator that November morning, hearing the exchange live, called the White Plains police in a desperate attempt to cancel the call for emergency medical aid. Chamberlain’s niece, who lives in the building, ran down, trying to intervene. Chamberlain’s sister was on her cellphone, offering to talk to her brother. The police denied any attempt at help. One was heard on the recording saying, “We don’t need any mediator.”

The heavily armed police used a special device to take Chamberlain’s door completely off the hinges and, as chillingly captured in the Taser-mounted camera, burst into the apartment. Mayo Bartlett recounted seeing Chamberlain shirtless in the video, hands at his side, without the knife or hatchet that police claim he wielded, standing in his boxer shorts. “The minute they got into the house, they didn’t even give him one command. They never mentioned, ‘Put your hands up.’ They never told him to lay down on the bed. They never did any of that. The first thing they did, as soon as that door was finally broken off the hinges, you could see the Taser light up, and it was charged, and you could see it going directly toward him.”

The last thing Bartlett hears on the Taser tape is “shut it off,” meaning, turn off the video recording, which the police did. Within minutes, they would shoot Chamberlain twice. Four months later, no one has been charged with the killing. Democracy Now! cohost Juan Gonzalez revealed the name of the shooter through his reporting in the New York Daily News, as White Plains Officer Anthony Carelli. Carelli is to be tried in coming months for alleged police brutality against two brothers, the sons of Jordanian immigrants, who say Carelli beat one of them, Jereis Hatter, while handcuffed, and called him a 'raghead'.

Trayvon Martin was killed Feb. 26. A Florida grand jury is expected to begin the investigation into his killing on April 10. The next day, April 11, a New York grand jury is scheduled to begin hearing evidence in the case of Kenneth Chamberlain Sr. He was killed last November. In both cases, an African-American male was gunned down. In both cases, the shooter is known, but neither yet has been arrested. 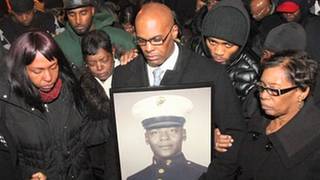