Nigerian Activist Nnimmo Bassey: Rio+20 Summit Will Not Get Us Out of Environmental Crisis

We’re joined from the Rio+20 Earth Summit in Rio by Nnimmo Bassey, executive director of Environmental Rights Action in Nigeria, chair of Friends of the Earth International. “The leaders came to Rio with, clearly, very low ambitions, and probably with the desire to block agreements on any issue that would not be of particular benefit to them or their countries,” Bassey says. “They’ve come out with a draft agreement which the presidents are looking at currently, a draft agreement that is shallow, that is hollow, that doesn’t describe or deal with the root causes of the crisis, the multiple crises that the world is confronted with right now.” [includes rush transcript]

AMY GOODMAN: Our broadcast is special, bringing you voices from the Rio summit.

JUAN GONZÁLEZ: We continue our coverage of Rio+20, the largest United Nations conference ever. Some 15,000 soldiers and police are guarding about 130 heads of state and government as well as ministers and diplomats from 180 countries, and at least 50,000 others. For more on the summit, we’re joined now by Nnimmo Bassey in Rio. He’s executive director of Environmental Rights Action in Nigeria and chair of Friends of the Earth International. He’s the author of To Cook a Continent.

NNIMMO BASSEY: Thank you very much.

JUAN GONZÁLEZ: Can you tell us first your preliminary assessment of the gathering and what the rest of the world can expect from whatever the world leaders agree on there?

NNIMMO BASSEY: Well, the leaders came to Rio with, clearly, very low ambitions, and probably with the desire to block agreements on any issue that would not be of particular benefit to them or their countries. So, coming to Rio to talk about the future that we want and also looking at sustainability on the basis of green economy was a bit problematic, to start with, because it’s difficult to discuss a concept over which there is so no agreement. Many leaders don’t really have the same understanding of what green economy is. And so, they’ve come out with a draft agreement which the presidents are looking at currently, a draft agreement that is shallow, that is hollow, that doesn’t describe or deal with the root causes of the crisis, the multiple crises that the world is confronted with right now.

And at the end of the day, it does appear that the success or the real outcome of this Rio+20 would be in what has not been said, what has not been expressed, rather than what has been said. We expected that they would come here to present their scorecard on what they’ve done with the agreements of 1992; but rather, what we’ve seen in the negotiation has been a very strong desire to review what was decided already, even to agree to mention the Rio Principles, such as common but differentiated responsibilities, such as precautionary principles, such as peculiar requirements of youth and women and the rest. These were very difficult indeed. At the end, the leaders struggled to include just a couple of these positions. And this already is presenting a lot of reasons for us to worry that the United Nations system has been captured by corporations who are driving policy from the background. This is really a very worrisome trend.

JUAN GONZÁLEZ: Nnimmo Bassey, you talk about the scorecard, but the United Nations Environment Program tracked about 90 goals that were developed originally out of Rio 20 years ago and then by other international conferences, and it found that significant progress has been made on only four of them. That’s reducing ozone depletion, removing lead from gasoline, improving access to water supplies, and boosting research for marine pollution. Four out of 96. That is a—that would be a failure on any scorecard. Your assessment of whether that’s going to improve at all as a result of this summit?

NNIMMO BASSEY: I agree with you completely that there’s been a total failure by governments and policymakers over the decisions that were reached in 1992. And here, with attention being removed from those pillars, even the four—the three pillars of sustainability—economic prosperity, environmental protection, social equity and justice—have now been more or less supplanted by the emphasis on economy. And the green economy is opening up space for the whole sale of nature. And very troubling is the whole concept of payment for environmental services. You know, the whole thing is opening up for speculation, which is the very reason why we have financial crisis, the food crisis, and why the climate crisis is not being tackled.

I’ll give you one example. I’ve read the background papers produced by the United Nations Environment Program, and they talk—they have some case studies to show that a green economy can really work. And one of the case studies is on placing value on pollinators. The background to all this is that if financial value is not placed on anything, then people don’t value such things. I mean, this is fundamentally flawed, to start with that kind of premise. But they said, in the report, that pollinators provided service worth $190 billion. And we challenge this. How do you begin to estimate how much the value of what butterflies and birds do? How can you put monetary value to that? So, with this kind of platform, we find a lot of space for certain kinds of economists, for scientists, for corporations, who would jump in to begin to commodify every aspect of nature, including the air. Already the air has been grabbed. The water has been grabbed. The forests have been grabbed. The soils have been grabbed. And what the world is facing now is a real crisis. And this conference is not providing the way out of the crisis.

AMY GOODMAN: Nnimmo Bassey is speaking to us from Rio de Janeiro, from the largest U.N. global warming summit, the largest U.N. summit of any kind ever. More than 130 world leaders are there. President Obama is not there, though he was in Copenhagen. The U.S. is being represented by the secretary of state, Hillary Clinton. Nnimmo, could you comment on that, that the U.S. president is not there? And then talk about what you plan to say to Ban Ki-moon, the U.N. secretary-general, tomorrow when you meet him.

NNIMMO BASSEY: Well, it’s really shocking that President Obama is not in Rio, because this conference is set to prepare the platform for the direction of development, sustainable development, that the world is going to take over the next decades. Twenty years from 1992, we have backtracked rather than make advances. And so, this was an opportunity for world leaders such as the president of the United States to come here and show leadership in terms of taking things forward in a way that is acceptable.

But, you know, I’m also not so surprised, because the trend has been set right from Copenhagen in 2009, in Cancún and in Durban, that these gatherings are not really about real solutions. They are about how to open up business for corporations. And this is what I intend to tell the secretary-general of the United Nations tomorrow, as we will be presenting a petition from over 400 civil society organizations, that the United Nations must begin to pay more attention to what the people of the world are saying, what the people who are impacted by the multiple crises are experiencing, rather than listening so much on what corporations are saying.

Yesterday, I was invited to be one of those who would sit on a roundtable meeting with the president, but it conflicted with the time that people were on the streets of Rio protesting and marching. I thought the best place to be is right on the street, because we have to stand with the people, because we must not glamorize seats. We have to look for a real solution. And the real solution in Rio—and I will emphasize this tomorrow—is found in the people’s summit, the people’s space, where people are not beating around the bush. People are going straight, that we have to stop corporate capture, we have to stop false solutions in terms of selling off of forests and cutting off communities from the resources that they need to live. We have to demand that there should be funding for technology transfer. And also, the sustainable development goals that have been proposed have to be unpacked. We need to know what these are and how they’re going to be funded and made to happen. The Millennium Development Goals have not been attained. And by 2015, they will—the whole thing will expire. And it’s mainly because finance is not being made available. And yet, rich nations are spending billions of dollars, without thinking, on a warfare and destructive activities, whereas what we need now is to rescue the planet.

AMY GOODMAN: Nnimmo Bassey, we want to thank you for being with us. Nnimmo Bassey is with—is chair of Friends of the Earth International and also with Environmental Rights Action in Nigeria. This is Democracy Now!, democracynow.org, The War and Peace Report. We’ll stay in Rio after break. 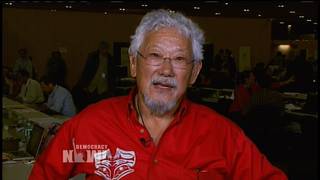