Bill McKibben of 350.org on Colorado Wildfires, Debby, Keystone XL and the Failure of Rio+20

With extreme weather fueling wildfires in Colorado and record rainfall in Florida, the Obama administration has moved closer to approving construction of the southern section of the Keystone XL pipeline. We’re joined by environmentalist, educator and author Bill McKibben, founder of the grassroots climate campaign 350.org. “Today is one of those days when you understand what the early parts of the global warming era are going to look like,” McKibben says. “For the first time in history, we managed to get the fourth tropical storm of the year before July. … These are the most destructive fires in Colorado history, and they come after the warmest weather ever recorded there. … This is what it looks like as the planet begins — and I underline 'begins' — to warm. Nothing that happened [at the United Nations Rio+20 summit] will even begin to slow down that trajectory.” [includes rush transcript]

StorySep 10, 2020“This Is Climate Change”: West Coast Fires Scorch Millions of Acres & Blot Out the Sun

AMY GOODMAN: And we end today’s show looking at corporate money in the environment, as Florida is lashed by drenching rains and the worst wildfires in Colorado’s history continue to rage. We’re joined by Bill McKibben, founder of 350.org, author of the book Eaarth. He’s just back from the Rio+20 summit in Brazil, where oil and gas giants successfully lobbied to continue subsidies for their multi-billion-dollar business. Meanwhile, here in the U.S., the Obama administration has granted permission for part of the southern leg of the Keystone XL pipeline, which would carry oil to refineries in the Gulf Coast.

Bill, from Rio to the XL to the wildfires of Colorado, hold forth.

BILL McKIBBEN: Well, look, today is one of those days when you understand what the early parts of the global warming era are going to look like. We’ve got the first—for the first time in history, we managed to get the fourth tropical storm of the year before July. Debby is dropping absolutely record amounts of rain across much of Florida. The total may top two feet. Meanwhile, in Colorado, they’ve evacuated not only parts of the Air Force Academy, they just evacuated—and this is truly ironic—the headquarters of the National Center for Atmospheric Research outside Boulder, or at least part of it, because that’s the place where the most important climate science in the world is going on. These are the most destructive fires in Colorado history, and they come after the warmest weather ever recorded there. You could do the same exercise all over the planet today. This is what it looks like as the planet begins — and I underline “begins” — to warm.

And nothing that happened in Rio will even begin to slow down that trajectory. Rio was a failure. Young people did the only thing of interest there almost: they walked out of the conference, turned in their credentials with a day to go. I was proud to go with them, because, clearly, the thing had turned into a sham. The best proof of that probably, as you say, is the fact that even—even this most obvious of measures—ending the subsidies, the almost trillion dollars a year that the world pays to the fossil fuel industry—even that wasn’t really on the table. We had a Twitter storm a week ago today all over the world. The number one trending topic on Twitter wasn’t, you know, Justin Bieber’s birthday or something like that, it was “end fossil fuel subsidies,” people around the planet beginning to get really exercised. And yet, the Rio conference ended without any agreement on whether that might happen or when or how.

Look, Amy, the absolute command of the fossil fuel industry over most of our political system is really evident. It’s really evident when the president, who, under great pressure and with some courage blocked the northern part of the Keystone pipeline, yesterday with great fanfare said that he was approving the second southern half, the part that’s in the U.S. Now, this doesn’t connect up to the tar sands, so it probably isn’t the same blow in terms of climate change, but it’s sure a blow to people across Texas where that pipeline is going. If you go TarSandsBlockade.org, you’ll see how we’re going to try and fight back. There are brave people down there putting their bodies on the line, or soon will be, up against that tide of fossil fuel money. But this is going to be an awfully hard fight, ’til we build the movement strong enough to really, really counterbalance that weight of fossil fuel money.

AMY GOODMAN: Bill, you say it doesn’t hook up to tar sands, but isn’t that the eventual goal? This is just the southern leg.

BILL McKIBBEN: That’s definitely the eventual goal. That’s what the—that’s what all—that’s what the Koch brothers and every other tar sands billionaire wants to do. For the moment, that’s still under review, and the president has promised that it will finally get a serious review. We don’t know how serious. The State Department has put out their initial guidelines for their next review last week, and they didn’t even mention climate change. One’s beginning to wonder whether the State Department isn’t really a very weak link in any effort to deal with climate change. Secretary of State Clinton has unfortunately failed not only at Rio, but at Copenhagen, in terms of climate change diplomacy. And since it’s the State Department that will review this pipeline crossing over from Canada, it will probably be our best chance to figure out whether they take global warming seriously at all. They should. It’s clearly the great national security, diplomacy issue of the time ahead. We’ll find out.

And we’ll keep fighting, not only on Keystone, but on these fossil fuel subsidies. At 350.org, we’ve got this remarkable electronic scoreboard that just went up that allows people all over the country to nail down their senators and congressmen on whether they think we should keep giving money every year to the fossil fuel industry. Senator Sanders, my senator here in Vermont, has introduced a bill along with Keith Ellison of Minnesota that would strip $113 billion in fossil fuel subsidies over the next decade. Even if—even if these guys weren’t destroying the planet with this money, it’s obnoxious that we’re giving the richest industry on earth an endless taxpayer-funded gift, especially since there’s nothing left to subsidize. For better and for worse, we’ve known how to burn coal and oil for a couple of hundred years. There’s no point in underwriting it; we know how to do it.

AMY GOODMAN: Bill McKibben, I want to ask you about our top headline today. A federal appeals court has upheld the Environmental Protection Agency’s effort to use the Clean Air Act to regulate carbon emissions from the country’s largest polluters. Also, the three-judge panel upheld the Obama administration’s inaugural car and fuel economy standards, which aim to cut new car pollution in half and double fuel efficiency by 2025. Your response? We only have about 30 seconds.

BILL McKIBBEN: Those things are promising. Let’s hope the Supreme Court doesn’t get in the way. No wagers on that. But these are very long-term steps. The key steps right now are to keep that oil and coal in the ground, not to open the Arctic to drilling, not to build new coal ports on the West Coast, not to hook up that pipeline to the tar sands.

AMY GOODMAN: Now, of course, in an election year, a lot of people hear you say “not, not, not,” and they’re concerned that this means that we will not have jobs.

BILL McKIBBEN: Well, the good news is that we’re really figuring out how to do green technology. If you want a—if you want a real success story, last month, Germany—northern latitude country—managed one day to generate more than half the electricity it consumed from solar panels within its borders. There’s no longer a technical problem to the job-rich transition to green energy. The problem is political, and it’s tied up in the money that you’ve been talking about [inaudible]—

AMY GOODMAN: Bill McKibben, we’re going to leave it there. I thank you for being with us, founder of 350.org. His latest book is called Eaarth. That does it for the show. Be sure to tune in after our show Thursday morning, 10:00 Eastern time, for live coverage of the Supreme Court’s decision on healthcare. 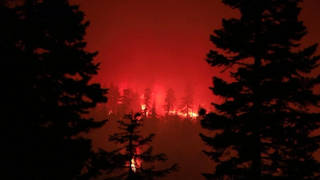