The Supreme Court has upheld the Affordable Care Act, President Obama’s signature bill, clearing the way for the largest revamp of America’s healthcare system since the 1960s. We get reaction from acclaimed filmmaker Michael Moore, whose 2007 documentary, “Sicko,” tackled many failures of the U.S. healthcare system. “This really is a huge victory for our side, in spite of all of my concerns with this law,” Moore says. “We have to work toward Medicare for all, so that everyone’s covered … We can’t allow private insurance — people making a profit off of people getting sick.” [includes rush transcript]

StorySep 29, 2011Michael Moore: Health Insurers Use Costlier Premiums to Fund Campaigns Against Critics Like Me

JUAN GONZÁLEZ: On Thursday, the Supreme Court vetoed—voted to uphold the Affordable Care Act, President Obama’s signature healthcare reform bill. Notably, it was Chief Justice John Roberts who joined the five-to-four majority to affirm the individual mandate that requires virtually all Americans to either obtain health insurance or pay a penalty by 2014. The move clears the way for the largest revamping of America’s healthcare system since the 1960s. Although the law remains mostly intact, the court ruled against a provision that allows the federal government to withhold Medicaid funding from states that don’t comply with the program’s expansion. In a moment, we’ll host a roundtable discussion on the Supreme Court decision.

AMY GOODMAN: But first, Michael Moore. I spoke with the Academy Award-winning filmmaker on Thursday during Democracy Now!’s individualmandate”>special coverage of the court’s ruling as the decision came down. Among Michael Moore’s many films is the 2007 documentary, Sicko, about the American healthcare system. It’s celebrating its fifth anniversary this weekend in Philadelphia. Shortly after the Supreme Court upheld President Obama’s healthcare overhaul, I asked Michael Moore for his response.

MICHAEL MOORE: Let me state the positive first. This is—this really is a huge victory for our side, in spite of all of my concerns with this law. It didn’t go far enough. It doesn’t cover all Americans. This is not true universal healthcare. Nonetheless, the right wing has been handed a serious defeat today. This is a real—a real smackdown of their—the way that they believe our country should be structured. And on that alone, everybody should feel really good right now. I know we’re not used to euphoria over anything. It rarely happens. But in this case, I think that everybody should pause today and celebrate this victory.

And then, tomorrow, we have to keep moving the ball down the field. We have to work toward Medicare for all, so that everyone’s covered, a single-payer system, all these things. It would have been a lot harder to move that ball had the decision gone the other way today. That’s why the best thing about this is, is that it moves history forward on the right path, toward what we will eventually have, just as every other civilized country has it. So, I’m—on that level, I feel really good.

And tomorrow, or maybe even later today, we’ll start—we’ll start talking about how this law was also structured to create huge, huge profits for insurance companies. And in the end, we can’t allow private insurance—people making a profit off of people getting sick. Private insurance is not the way to go. And that’s—we have to keep moving toward.

AMY GOODMAN: I wanted to remind people about the documentary you did, which goes very much to the point you just made, Michael Moore. This is the trailer of Sicko.

PRESIDENT GEORGE W. BUSH: We got an issue in America: too many good docs are getting out of business; too many OB-GYNs aren’t able to practice their—their love with women all across this country.

NARRATOR: When Michael Moore decided to make a movie on the healthcare industry, top-level executives were on the defensive. What were they hiding?

SECURITY: That’s not on, right?

LEE EINER: The intent is to maximize profits.

MICHAEL MOORE: You denied more people healthcare, you got a bonus?

UNIDENTIFIED WOMAN: When you don’t spend money on somebody, it’s a savings to the company.

PRESIDENT RICHARD NIXON: I want America to have the finest healthcare in the world.

MICHAEL MOORE: Four healthcare lobbyists for every member of Congress. Here’s what it costs to buy these men and this woman, this guy, and this guy. And the United States slipped to 37 in healthcare around the world—just slightly ahead of Slovenia.

LINDA PEENO: I denied a man a necessary operation and thus caused his death. This secured my reputation, and it ensured my continued advancement in the healthcare field.

NARRATOR: In the world’s richest country…

PRESIDENT GEORGE W. BUSH: Uniquely American, isn’t it? I mean, that is fantastic.

LAURA BURNHAM: I get a bill from my insurance company telling me that the ambulance ride wasn’t pre-approved. I don’t know when I was supposed to pre-approve it. After I gained consciousness in the car? Before I got in the ambulance?

NARRATOR: It’s the only medicine.

MICHAEL MOORE: There was actually one place on American soil that had free universal healthcare.

Which way to Guantánamo Bay?

GOVT. OFFICIAL: Detainees representing a threat to our national security are given access to top-notch medical facilities.

MICHAEL MOORE: Permission to enter. I have three 9/11 rescue workers. They just want some medical attention–the same kind that the evildoers are getting. Hello?

AMY GOODMAN: There you have it, Michael Moore, the Academy Award-winning filmmaker. It’s the fifth anniversary of his documentary Sicko. He’s on the Democracy Now! video stream with us from Los Angeles, responding to the Supreme Court upholding the Affordable Care Act. And those that sided with the chief justice, who was the swing vote in the decision, Ruth Bader Ginsburg, Stephen Breyer, Sonia Sotomayor and Elena Kagan.

Michael, we’ve spoken to a lot of single-payer advocates who say it’s not a surprise Roberts sided with them, because this is siding with the insurance industry, certainly an industry that you have taken on and that has targeted you. So your thoughts, when you say tomorrow we begin the fight for Medicare for all, on what direction that should go?

MICHAEL MOORE: Toward exactly what you just said: Medicare for all. We just need to expand Medicare for all the citizens of this country. Now, of course, this is something that the insurance companies don’t want to happen, because, ultimately, Medicare for all won’t work if the people aren’t in charge of it. Right now, and continuing even with this victory today, the insurance companies are going to call the shots. They’re going to be restricted more than they were in the past. For instance, one of the great things about today is that the provision that they cannot deny people because of pre-existing conditions, that apparently now stands. The fact that parents can keep their children, up to the age of 26, on their health insurance, that stands.

So there’s all these smaller provisions that are in that—you know, they keep talking about the mandate being the centerpiece of this law. Well, there’s other pieces of the law that are, I think, just as important, if not more important. And the mandate is—I mean, it’s—I’ve never supported it, because it mandates people to give money to these profit-making insurance companies. If it was different, if it was something that the government ran, that you and I were in charge of, then, yes, everybody has to be part of the system. And we’re all in this together. We all have to share the burden. We all ought to take care of each other.

So, that’s the fight that needs to continue. The National Nurses Union is going to lead the way on this. We should get behind their efforts. And, look, I am very optimistic. I know we have a hard road ahead of us. But if you just take the long view of this, every step of the way goes in our direction, not the backwards direction.

AMY GOODMAN: Academy Award-winning filmmaker Michael Moore, director of the 2007 documentary, Sicko, which exposed flaws in the U.S. healthcare system. Since its release, the number of uninsured rose from almost 46 million in 2007 to at least 50 million today. Meanwhile, those with insurance are paying more for their care. This Saturday, Michael Moore will host an event in Philadelphia to mark the film’s fifth anniversary. Speakers include health insurance whistleblower Wendell Potter, who will be joining us, among others, in a moment. Stay with us. 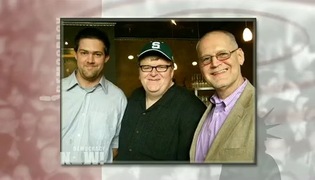 Michael Moore: Health Insurers Use Costlier Premiums to Fund Campaigns Against Critics Like Me