The award-winning new documentary, “5 Broken Cameras,” tells the story of a Palestinian farmer who got a video camera to record his son’s childhood, but ended up documenting the growth of the resistance movement to the Israeli separation wall in the West Bank village of Bil’in. The film shows the nonviolent tactics used by residents of Bil’in as they join with international and Israeli activists to protest the wall’s construction and confront Israeli soldiers. We speak with the film’s directors, Emad Burnat, a Palestinian, and Guy Davidi, an Israeli. [includes rush transcript]

JUAN GONZÁLEZ: We turn now to a prize-winning new film that tells the story of a Palestinian farmer who lives with his wife and four small children in the village of Bil’in, in the central West Bank. It’s called 5 Broken Cameras.

Emad Burnat got his first camera in 2005, when his youngest son, Gibreel, was born. Almost simultaneously, the Israeli army began building a separation wall between Bil’in and a nearby Israeli settlement, separating residents from the olive tree groves that are their livelihood.

This is a clip from the documentary, narrated by Emad Burnat.

EMAD BURNAT: [translated] Soraya and I have four sons. Each boy is a phase of our lives. Each boy experienced a different childhood. Mohamad, our eldest, was born in 1995, in the time of hope after the Oslo Peace Accords. In his childhood, things were more open. We could go to the sea every summer. Yasin was born three years later, in a time of uncertainty. The very day the Intifada began in 2000, Taki-Ydin was born. The hospital was full of the dead and wounded. His childhood was shaped by the long siege the West Bank was under. In February 2005, Gibreel was born. Between my childhood and Gibreel’s birth, settlements were built closer and closer, taking up more and more cultivated land, so Israeli settlers could move in.

AMY GOODMAN: Emad Burnat, narrating an excerpt from his new documentary, 5 Broken Cameras. Burnat teamed up with his co-director, Israeli filmmaker Guy Davidi, to document the nonviolent tactics residents of Bil’in use as they join with international and Israeli activists to protest the separation wall and confront Israeli soldiers. During the course of the film, one camera after another is smashed or shot.

EMAD BURNAT: [translated] The speed of an M16 bullet is 2,800 feet per second. It takes the bullet three milliseconds to hit my camera. In that flash of time, before the experience becomes a memory, everything I know vanishes.

AMY GOODMAN: Another excerpt from 5 Broken Cameras. With each camera, a part of Emad Burnat’s story unfolds.

Well, Emad Burnat joins us now in our studio, from Bil’in to New York City, along with his partner in the film, co-director, Israeli filmmaker Guy Davidi. Their documentary has won awards at both Sundance and the IDFA, Amsterdam’s famed documentary festival, and is in theaters now. Here in New York City, it’s playing at Film Forum through June 12th, and it’s just been named a New York Times critics’ pick.

We welcome you both to Democracy Now! Emad, your five cameras, all destroyed by Israeli soldiers or settlers. Talk about why you got your first camera in 2005.

JUAN GONZÁLEZ: And these protests continued every week for four years?

JUAN GONZÁLEZ: And how had the villagers been able to maintain that length of time in continuing protesting, despite the resistance by the settlers and the army?

EMAD BURNAT: Yeah, in the beginning, nobody realized that the struggle or the resistance will keep so long time. But the people have been lost their land and their trees, so they decided to keep in the struggle and to keep resist, until remove the wall and return the land.

AMY GOODMAN: This is an excerpt from the beginning of 5 Broken Cameras.

EMAD BURNAT: [translated] We begin to organize demonstrations with Israeli activists joining us.

ORGANIZER 1: [translated] Is there anything important you want to say?

ORGANIZER 2: [translated] Bil’in is here. Part of the Matityahu settlement is on Bil’in land. So is part of the Qiryat Sefer settlement. And the new plan goes to here.

ORGANIZER 3: [translated] We want to know how the Israeli army approved taking these lands. How did the construction companies take them?

EMAD BURNAT: [translated] And then we decided that every week, after the Friday prayer, we’d try to get to that land and protest.

AMY GOODMAN: An excerpt of 5 Broken Cameras. Guy Davidi, you’re an Israeli citizen. How did you link up with Emad Burnat? How did you come to Bil’in?

GUY DAVIDI: I was actually a video activist at the time, before, from 2003, with the known movement of Indymedia. We had our Indymedia in Tel Aviv, and I was going to the West Bank to different villages to participate the nonviolent movement and then to film that. So in 2005, when this movement started in Bil’in, I just went there out of curiosity. And I was so impressed by the hospitality of the people, so I wanted to stay there. So I started making a long feature film in the village, and I stayed inside the village for a few months, which was a very important experience for me. And this is what helped me to create, then to work with Emad together to create the film later on, when we started to work.

JUAN GONZÁLEZ: And the reaction of the settlers of the—the settlers in the area and of the army to your participation, and the other Israelis?

GUY DAVIDI: There were—it was a build—there was a big buildup, so there were more and more Israelis who—at one point, it was difficult for the soldiers or for the settlers to prevent us from going to the demonstration. But in the beginning, they did try. They followed us from Tel Aviv with their bus—with our bus and tried to block us or to arrest us on the way. But when it got a bit bigger, it became much more easy for us to go in the village. So…

AMY GOODMAN: One of the unique things about 5 Broken Cameras is that it tells the story of the struggle against the Israeli security wall from the perspective of the residents of Bil’in. Emad, this is your friend Adeeb Abu Rahmah, who is confronting Israeli soldiers.

ADEEB ABU RAHMAH: [translated] This is our land! It’s no use. This is a small village. What do you think? Have you no heart? No family? Every one of you knows that this is village land! You stole my land! Don’t do that! I’m telling you!

EMAD BURNAT: [translated] That’s Adeeb. Adeeb is always looking for an opportunity to make a scene.

ADEEB ABU RAHMAH: [translated] We were born on this land, and we’ll die here. We’ll live on this land for the rest of our lives!

AMY GOODMAN: Adeeb Abu Rahmah hugs an olive tree at the end of that clip. If you could talk about Adeeb, his role in the protests, and what happened to him, Emad.

EMAD BURNAT: Actually, Adeeb, he’s my close friend. And he—when we were a child, he was my friend. And we grew up, and we know each other. We live in the same area, in the same village, in same neighborhood. And we were together in the protests. So he was protesting, and I was filming. So I was always focusing at him, at what’s he—what he’s doing. He was actually a very courage man, and he didn’t accept—he never accept the violence of the soldiers or what they are doing against the land, to confiscating the land and destroying the trees, because he lost his land, and he was very angry about this.

AMY GOODMAN: And he was arrested in—

EMAD BURNAT: He was—yeah, he was arrested, and he’d been to jail about 18 months. And he—after this, he was released. And he had been shot many times.

JUAN GONZÁLEZ: And the impact of all of this on your children and your wife of being characters in this film?

EMAD BURNAT: Yeah, actually, I was filming outside the demonstration and the actions and the night invaded by the soldiers when they come to arrest somebody. And I was—in the same time, I was documenting and filming my family, my sons, my son Gibreel who was born in the same time, in the beginning, and he was growing up and watching what’s going outside. So it’s—the idea was to make it personal, not more political. So…

AMY GOODMAN: I mean, that is its power. It is so personal.

AMY GOODMAN: And you see Gibreel, your little boy—one, two, three—celebrating his birthdays and being socialized as he is dealing with these confrontations with the Israeli soldiers and settlers breaking your cameras, one by one by one.

AMY GOODMAN: I want to thank you both for being with us. We’re going to do part two and put it at democracynow.org. Emad Burnat and Guy Davidi, their film is 5 Broken Cameras. They are its directors. A remarkable film about the West Bank village of Bil’in. 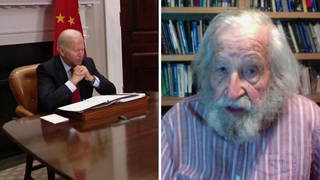