Watch Interview with Maldives Ex-President Nasheed on Democracy Now! Ahead of Order to Stand Trial

Above, we revisit part 1 of our interview with Madlives Ex-President Mohamed Nasheed. We also speak with Jon Shenk, director of The Island President, a new documentary about Nashee’s climate activism.

As we reported Tuesday, prosecutors in the Indian Ocean state of Maldives have ordered the country’s ousted former president, Mohamed Nasheed, to stand trial. Nasheed is being charged for ordering the arrest of a judge appointed by Maumoon Abdul Gayoom, who ruled the Maldives for 30 years before Nasheed became its first democratically elected president in 2008. Nasheed was ousted earlier this year in what he has described as a coup at gunpoint by Gayoom’s supporters. Nasheed’s backers say the latest charges are a politically motivated attempt to thwart his candidacy in new elections.

Click here to see part 2 of the interview with Nasheed. 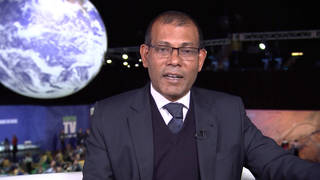