Tens of thousands of young undocumented immigrants waited in mile-long lines across the country on Wednesday to take advantage of a new federal policy that may grant them legal status to temporarily remain and work in the United States. Under the Deferred Action for Childhood Arrivals Program, immigrants under 31, including students who are enrolled in school on the day they apply, will now be eligible for a two-year reprieve from deportation if they demonstrate that they came to the United States before their 16th birthday, lived in the United States for the past five years, have not been convicted of certain crimes, and do not pose a national security threat. As the policy went into effect, Republican Gov. Jan Brewer of Arizona issued an executive order barring immigrants who are granted a reprieve from receiving public benefits or getting drivers’ licenses. She also instructed state agencies to make sure only legal residents access taxpayer-financed benefits. We go to Phoenix to speak with journalist and organizer Roberto Lovato. [includes rush transcript]

StorySep 02, 2019Death and Resistance on the U.S.-Mexico Border: A Democracy Now! Special

AMY GOODMAN: Tens of thousands of young undocumented immigrants waited in lines as long as a mile on Wednesday to take advantage of a new federal policy that may allow them to temporarily remain and work in the United States legally. Under the new policy, immigrants aged 30 or younger may now be eligible for a two-year reprieve from deportation if they demonstrate they came to the United States before their 16th birthday and met other requirements. President Obama first announced the so-called Deferred Action for Childhood Arrivals Program back in June after initiating it using his executive authority.

PRESIDENT BARACK OBAMA: These are young people who study in our schools. They play in our neighborhoods. They’re friends with our kids. They pledge allegiance to our flag. They are Americans in their heart, in their minds, in every single way but one—on paper. Now, let’s be clear. This is not amnesty. This is not immunity. This is not a path to citizenship. It’s not a permanent fix. This is a temporary, stopgap measure.

AMY GOODMAN: The new policy could halt the deportation of as many as 1.76 million undocumented immigrants who were brought to the United States as children. Unlike the stalled DREAM Act, the program does not provide any legal immigration status like a green card. One student applying for deferred action is the Peruvian-born Sofia Campos, who spoke to ABC News.

SOFIA CAMPOS: I’ve been here since I was six years old. I’m an American in every single sense of the word, except for that nine-digit Social Security number. As undocumented members of this community, we are often living in the shadows every day, because of shame, because of fear of deportation.

AMY GOODMAN: While thousands of young immigrants lined up across the country to apply for deferred action Wednesday, Arizona Republican Governor Jan Brewer issued an executive order barring immigrants who are granted a reprieve in her state from receiving public benefits or getting drivers’ licenses. She also instructed state agencies to make sure only legal residents access taxpayer-financed benefits.

For more, we’re going to Phoenix, Arizona, where we’re joined by Roberto Lovato, writer with New America Media, blogs at ofamerica.wordpress.com, also the co-founder of the civil rights group Presente.org, but he’s not speaking on their behalf today.

Roberto, welcome to Democracy Now! You’re in Phoenix today, where Jan Brewer, the governor, has just made this very controversial announcement. Talk about the significance of the incredibly long lines around the country of tens of thousands of young immigrants and what’s happening in Arizona.

ROBERTO LOVATO: What’s happening is that the young DREAMers are getting ready to collect on the work that they did to actually get us here in the first place, because the Republicans and Democrats demonstrated themselves resistant to their demands for some sort of reprieve. And so, it’s historic for the DREAMers, who deserve this and actual legalization and who are, unfortunately, facing a massive bureaucracy in the federal government immigration processing system. There’s going to be people that fall through the cracks. I’ve dealt with these kinds of matters when we had something called deferred enforced—DED, deferred enforced departure for Salvadorans, which is what they gave Salvadorans and Haitians and other groups when they want to give, you know, temporary status. And people are going to have to be renewing their status every couple of years, and they’re vulnerable at any moment to having this revoked. Like, if we were to have a Romney presidency, God forbid, but if we’d have a Romney presidency, Romney could revoke this, because it’s an executive order, and it’s coming out of the executive branch. And so—

AMY GOODMAN: You say “God forbid,” yet, under President Obama, there have been more deportations than we’ve ever seen.

ROBERTO LOVATO: Well, yeah, God forbid that we wouldn’t talk about the Democrats’ role in making the lives of the DREAMers impossible to difficult. I mean, I get a certain nasty feeling when I see people, Democrats, who, when the young DREAMers opposed—came out with the DREAM Act, they opposed it, because it would get in the way of their big plans for something called comprehensive immigration reform. So it seems ironic that some of the same immigrant rights groups in D.C. and some of the same Democratic Party operatives, who were doing everything they could to smash the ideas of—ideals of these young DREAMers, are now some of the primary spokespeople on Univision and on Spanish-language television, you know, explaining and applauding and everything. But, you know, right now the immigrant rights movement, the DREAM Act movement, the Democrats, everybody seems to be really pleased—and rightfully so—with the announcement, which took a lot of work from a lot of DREAMers and other groups that supported them.

AMY GOODMAN: And Governor Brewer defying President Obama once again, saying that the young immigrants who are actually approved will not be able to get, for example, drivers’ licenses in Arizona?

ROBERTO LOVATO: Yeah, well, the DREAMers right now are gearing up as we speak for protests happening today to go and announce their complete repudiation of this ridiculous policy. She does have—it appears that she does have, as governor, the right to do this. It will be challenged, I would suspect. And it’s just this—it just shows the continued political capital that Republicans and Democrats draw from the immigration theme, which ultimately ends up not benefiting anybody except people’s political aspirations and doing a lot of damage to the lives of friends of mine, friends of a lot of us, that—who are doing great things in school and in society generally. I mean, I think about my friends here in Arizona, like my friend Erica, and I’m just—I’m just appalled, really, to see that Governor Brewer—and, by the way, Joe Arpaio here in Phoenix has just announced that he’s going to not respect and he’s going to continue arresting people, probably. So it’s—you know, they’re just continuing this infantile game that the Republicans and Democrats have made out immigration. And what’s lost is the truth, and what’s lost is the opportunity to actually make a real difference in the lives of people.

AMY GOODMAN: And, of course, Janet Napolitano, who was the governor of Arizona, is now the head of the Department of Homeland Security, which is working with the executive branch in instituting this reprieve for young immigrants.

Roberto Lovato, I want to ask you about the latest controversy surrounding Romney’s private equity firm, Bain Capital. It concerns how Mitt Romney helped found the company with investments from Central American elites linked to death squads in El Salvador, where you’re from. Earlier this month, Democracy Now! spoke to Ryan Grim, the Washington, D.C. bureau chief for the Huffington Post_. His latest 1710133.html”>story is called “Mitt Romney Started Bain Capital with Money from Families Tied to Death Squads.” I asked him how Romney responded to his investigation. Let’s go to that clip.

RYAN GRIM: What they did is they sent me a paragraph of an article from the Salt Lake Tribune in 1999 that read, “As was Bain’s policy with any big investor, they had the families checked out as diligently as possible. They uncovered no unsavory links to drugs or other criminal activity.” Now, that’s simply impossible to believe. These families were certainly connected to death squads.

AMY GOODMAN: That was Ryan Grim of the Huffington Post. Roberto Lovato, you know this history well.

ROBERTO LOVATO: Yeah, I actually have a very personal relationship to some of this. Some of these death squads operated not just in El Salvador but in places like Los Angeles and here in Arizona. You know, there’s a lot of books about this now. It’s now part of history. And so, they operated against us in El Salvador. By the way, I was born here, but I’ve been—I was engaged with the Salvadoran process for several years. They chased us down over in El Salvador, and they chased us down here in the United States. So anybody with any familiarity with the Salvadoran universe knew that the death squads were operating, where they were operating, because it was news all the time in our networks, and they knew who were the people that were involved in these death squads—not just Roberto D’Aubuisson, you know, the U.S.-trained founder of the death squads, but the people in the financial and other economic sectors in El Salvador that were responsible for this.

And so, for Romney to—I mean, even Romney, if you recall, those same reports show that Romney was concerned that he wasn’t getting money that was, quote-unquote, “tainted” by death squads and other scary people. So, it’s kind of absurd. People in El Salvador are buzzing about this right now. I imagine there may be some people coming out to start talking about this. I mean, if I was the Obama campaign, I would go and get people from El Salvador who were impacted by the death squads to come and speak out about what they know about the connections between people like the Pomas, the Solers and others of what used to be called the “14 Families,” which were actually like about a hundred families, that were behind the financing of this apparatus of terror that ended up killing more than 80,000 people in the 1980s and ’90s.

AMY GOODMAN: Roberto Lovato, I want to thank you very much for being with us, with New America Media, blogs at ofamerica.wordpress.com, co-founder of Presente.org, speaking to us from Phoenix. We’re going to go back to Phoenix in a moment to speak with Javier Sicilia, the Mexican poet, but right now we’re going to turn directly back to Michael Ratner, president emeritus of the Center for Constitutional Rights, legal adviser to Julian Assange and WikiLeaks. 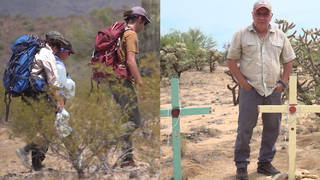